Cause:  Thrown from Police Horse Regd. # 801 whilst On Duty

Taree’s Dawson River Cemetery is approximately 6km from the CBD. Take the Manning River Drive towards Cundletown and, at the airport, turn left onto Lansdowne Road. From here it is 0.6km to the cemetery lane and a further 0.5 km to the cemetery. 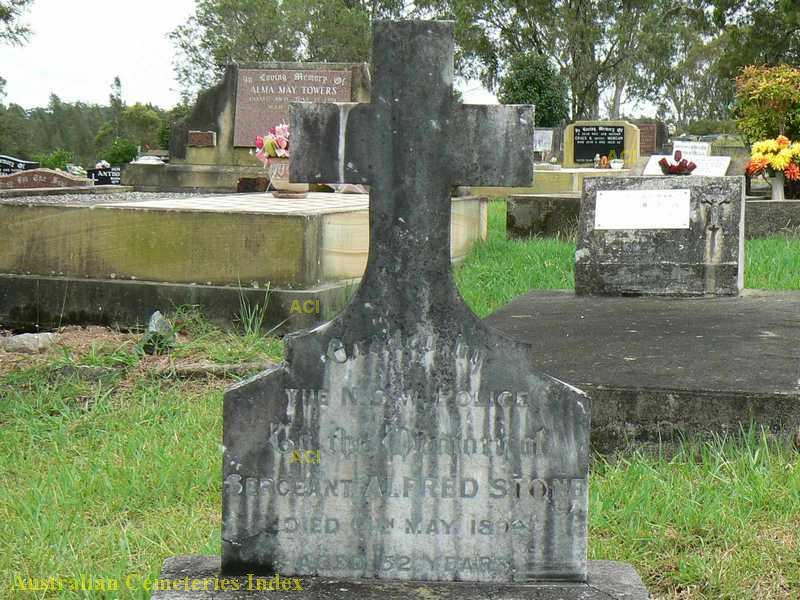 It will be remembered when the late Sergeant Stone was buried at the Dawson Cemetery, in May last, a movement was made in the police force to erect a memorial headstone and iron railing. This has now been accomplished — the railing being set on brick in cement. The stone is a white marble cross, standing on a brick and cement base, the lettering being in lead, as follows :— ‘ Erected by the N.S.W. Police to the memory of Sergeant Alfred Stone. Died 14th May, 1899 ; aged, 52 years.”

The expenses have been borne by the police in the north-eastern district— and their memento is a credit to their kindness of heart and forethought.

The work was executed by Mr. David Mudford, of Cundletown.

Constable Stein acted as Secretary and Treasurer to the movement, and very great credit is due to him for the successful manner in which he carried it out. Mr. Mudford, we understand, did not charge for his labor in erecting the memorial stone and railing, and the late sergeant’s comrades feel greatly indebted to him for his kindness.

On Wednesday morning last, at 11 o’clock, the District Coroner ( Mr. T. B. Boyce, J.P. ), held a, Magisterial inquiry at the residence of Mr. G. C. Hickson, Bullock Wharf, Wallamba River, touching the death of Alfred Francis Stone, Sergeant of Police. The inquiry lasted about two hours, and was then adjourned to Taree for the purpose of taking Dr. Gormley‘s evidence. Inspector Baker was present at the inquiry, and examined the witnesses.

The following was the evidence adduced : —

John Joseph Walsh deposed : I am an engineer in the employ of Mr. Hickson, at the Bullock Wharf Sawmills, Nabiac. I remember the afternoon of Wednesday, 10th instant. About 4 o’clock I saw Sergeant Stone ride up to the mill, which was then in full work — the engine and saws making the usual noise. I afterwards saw him in the mill, and bid him ” Good-day, ” and saw his horse tied up to a post of the mill. The Sergeant was in his uniform, and was thoroughly sober. About half-past 4 I saw the Sergeant come round to the front of the lathe-room, in which I was working. He was then leading his horse, and was about three or four yards from where the horse had been hanging up. He stopped the horse, and put the bridle over its head, put his foot in the stirrup, and mounted the horse, with his left foot in the stirrup, but before he was able to get his right foot in the stirrup, and become properly seated, the horse bolted at full gallop for about 10 yards, when he began to buck. The horse gave about two bucks, which took him. about twelve yards further, when the Sergeant was thrown off, falling sideways on to his head on a log. I heard the fall, and his head strike the log. I ran up to him, only being about fifteen yards from him when he fell, as I feared he would come off when I saw the horse bucking. He was lying on his back, with his eyes wide open. I picked him up— that is, lifted his head up and found a large cut on the left side of his head, at the back, about two and a half inches long, with blood pouring from it. I had deceased’s head on my knees. Several other of the mill hands came, and we bandaged his head up. He was unconscious. We then carried him to Mrs. Greenaway’s. Subsequently he spoke, but in a rambling manner. Before he was removed to Mrs.Greenaway’s a messenger was sent for Dr. Gormley, who arrived about nine o’clock in the evening. During the evening he muttered ” Oh, my head ” — but was quite delirious. I helped to lift him into a wagon the next afternoon, to be conveyed to Taree. Whilst doing so he said ” Don’t hurt me. ” He still seemed to be delirious.

Noel Eller Gorton deposed : I am a middle man at the Bullock Wharf Sawmills. I remember seeing Sergeant Stone ride up to the mill on the afternoon of Wednesday, 10th instant. He hung his horse up to the mill, walked in, and stood by the boards for a little time. He passed through then to the other end of the mill. When he was coming back we had just finished cutting the piece of timber we were at, and I met him and was speaking to him. I asked him if the affairs of the late Mr. Thomas Cocking, on whom an inquest had been held, were settled, as there was some money due to me in connection with the funeral. The Sergeant replied that he had been speaking to Mr. Flett about the matter, but it was not quite settled. The Sergeant was perfectly sober. I then went back to work, and deceased went to his horse. I saw him take the bridle off the post. The next I saw was the horse bucking over the skids, with the saddle and bridle on. Walsh, the previous witness, then called ” The man has got a fall,” and I went out to where he was. The Sergeant was laying on the ground unconscious, bleeding from a bad cut in the back of the head. He was bandaged up, and then removed to Mrs. Greenaway’s. I had known Sergeant Stone for about ten years.

Daniel Underwood Greenaway deposed : I am a bench hand at the Nabiac Sawmills at Bullock Wharf. I remember Wednesday afternoon, 10th instant. I saw Sergeant Stone leading his horse near the mill, and afterwards hang it up at the mill. The horse seemed to be fidgetty after being hung up, evidently from the noise of the mill. The sergeant after hanging his horse up walked through the mill. When coming back he talked to Mr. Gorton, the previous witness. He then went to his horse, and took it away, leading it from the mill. I saw no more of him, until I saw the horse in the air, and the Sergeant falling off. He came down on his head and shoulder on a log. I went to him shortly after, and saw Mr. Walsh holding his head up. There was a cut on the back of his head, which was bleeding freely, and he was unconscious. He was removed to my mother’s place, but did not appear to get any better — being about the same all through., Dr. Gormley arrived about half-past 8 o’clock, and attended to him, and saw him again early the next morning. He was removed the next afternoon — Thursday, the 11th instant— to Taree, never having regained consciousness. I did not consider the horse a dangerous one to ride. I saw the Sergeant riding it up towards the mill, and it was then going quietly. It was also ridden away after the accident, and after making a bit of a jump went quietly.

Frederick Ernest Stein deposed : I am a police constable stationed at Cundletown. I knew the police horse that Sergeant Stone was riding up to the time of his death. Its number was 801. The Sergeant had been riding the horse since the 20th February last, when it arrived at Taree from Maitland. I have seen him riding it, and ridden along side of him — being all day with him on the 7th April — and have seen him mount and dismount the horse without any trouble. I never saw the horse near any sawmill, or other going machinery. Sergeant Stone told me when we were riding together, that the horse was a bit too good for him, as he was inclined to buck. He also said “ I am getting old.” This was said casually, whilst talking about the horse, after I had remarked that it appeared to be a good one. Sergeant Stone was twenty-two years in the force, and had been stationed at Taree since the 22nd October, 1897, He was 52 years of age. He was a native of Canada, and has left a widow – his second wife – and a family of four sons and two daughters by his first wife. His life was insured — the total value of his policy now being £242, in the National Mutual Life Association. Bullock Wharf is 19 miles from Taree— and Sergeant Stone was in the habit of making frequent patrols here. I have seen the entry in the Duty Book at the Taree Police Station of Wednesday, the 10th May, instant, showing that Sergeant Stone left the station that morning at 10 o’clock ; on patrol to Nabiac. Deceased’s full name was Alfred Francis Stone.

The inquiry at this stage was adjourned to Taree, where it was resumed at 8 p.m., when

John William Gormley deposed ; I am a duly registered medical practitioner and Government Medical Officer, residing at Taree. On Wednesday evening, the 10th instant, I received a telegram asking me to go to Nabiac to attend Sergeant Stone, who had met with an accident. I went out and saw him at Mrs. Greenaway‘s house, close by the Bullock Wharf Sawmill. I found him in a semi-conscious condition, but unable to give any account of how his accident occurred. He was suffering from injury to the head, and had a scalp wound at the back of his head. I remained at Nabiac for the night, and in the morning he seemed if anything a little better. I then returned to Taree and had a conveyance sent to bring him in. He remained in the same condition until Friday morning, when he became more unconscious, in which state he remained until Sunday morning, dying about 11 ‘o’clock. The immediate cause of death was pressure on the base of the brain. A fall from a horse would cause such an injury — especially if he fall on his head. There was no evidence of the skull being fractured.

The presiding magistrate recorded the following finding: — “ I am of opinion that the deceased, Alfred Francis Stone, came to his death at Taree, on Sunday, the 14th. May, 1899, through pressure on the base of the brain, caused by deceased having been thrown from his horse at Bullock Wharf, Wallamba River, whilst in the execution of of his duty as a police officer, on the afternoon of Wednesday, the 10th instant, and that the occurrence was purely accidental. ”

Senior-constable Patrick Hogan, of Branxton, has been promoted to the rank of sergeant, at Taree, vice Sergeant Alfred Stone, deceased.
Sergeant Hogan has been associated with the police of the district for a number of years, and has proved himself to be a capable and intelligent officer, popular with his comrades, and respected by his superior officers. .He will be succeeded by Constable McCurley, of Denman.
http://trove.nla.gov.au/newspaper/rendition/nla.news-article142186786.txt

News of the death of Sergeant Alfred Stone, of Taree, was received in the Maitland district with regret.
The deceased officer was for a number of years one of the senior-constables on the West Maitland police station, and was respected by his superiors and comrades as well as by the general public
He leaves a widow and a family of sons and daughters.
http://trove.nla.gov.au/newspaper/rendition/nla.news-article142187851.txt
[divider_dotted]
Please follow and like us: