Buried at:  Anglican section of the Young General cemetery

On 1 May, 1872 the sergeant was returning to Cowra from Bathurst Court. During his journey he was told that two men who were wanted for robbery, George Gray and William Bristow, were at Daniel Horan‘s hut at Binnie Creek, twelve miles from Cowra. The sergeant rode over to investigate and as he neared the door of the dwelling the offenders suddenly emerged and shot him to death.

The Clarence and Richmond Examiner dated 7 May, 1872 provided a brief account of the tragedy, which tends to suggest that the offenders were known to the sergeant.

CARCOAR ” Thursday – I regret to have to announce that Sergeant Sutherland, of the Cowra police force, was shot dead last evening, by bushrangers, at a place about five miles from Cowra. It appears that two armed men called on a settler named Daniel Oram, whose house is distant about two miles from Cowra and demanded food, which he placed on the table for them. Sergeant Sutherland, who was going home from the Bathurst Assizes, rode up to the door during the meal, and was dismounting, when one of the men stopped to the door, gun in hand, and said, “I have been looking for you, you wretch,” and then shot him through the heart, causing instant death. The men then went off and Oram started to Cowra, and upon arriving there, informed the police, who are now in pursuit of the murderers. The fate of the unfortunate but brave officer is universally regretted. He leaves a wife, and had only been married a few months.

The sergeant was born in 1839 and joined the New South Wales Police Force on 5 January, 1863. At the time of his death he was stationed at Cowra.

(FROM OUR OWN CORRESPONDENT.) July 31.

We have also to record the arrest of a man named Frank Riley alias George Gray by Sergeant Cranney, on the charge of murdering Senior-sergeant Andrew Sutherland, of the New South Wales force, at Hordern’s hut, Beni Creek, on the 1st of May, 1872.

The prisoner had been staying in town for some few weeks, and left accompanied by another man with the avowed intention of going to the Surat races, but parted with his comrade about three miles from Weribone, his comrade going on into Surat, while he went out into the bush to camp.

Sergeant Cranney, in the meantime, appearing to have some clue to his identity, followed the pair, and finding that only one had reached Surat, returned on his tracks, and camped in the bush for two nights endeavouring to ascertain the whereabouts of the prisoner.

Becoming faint from fasting, he went to Weribone Station for food, and just dropped on to the man he was looking for, and who had also been there on the same errand. The officer arrested him at once, and prisoner was taken to Surat and remanded to Roma, and we believe by this time is on his way to Brisbane.

This is the second arrest of New South Wales offenders made by Sergeant Cranney during the past few months, the other being that of James Madgwick, whose capture and exploits were narrated in your columns a short time since. Sergeant Cranney was also the officer who arrested the notorious Patrick Collins. 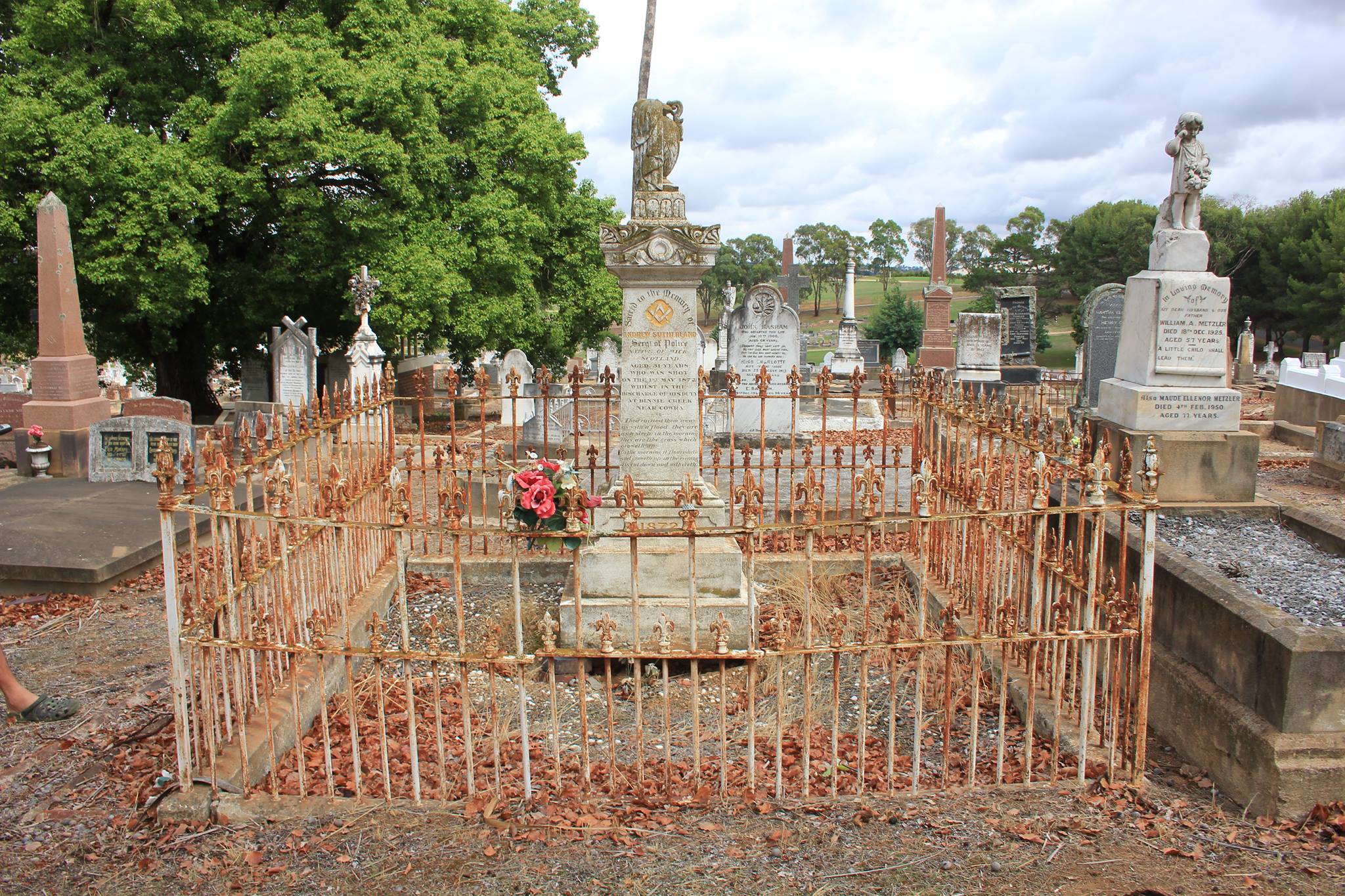 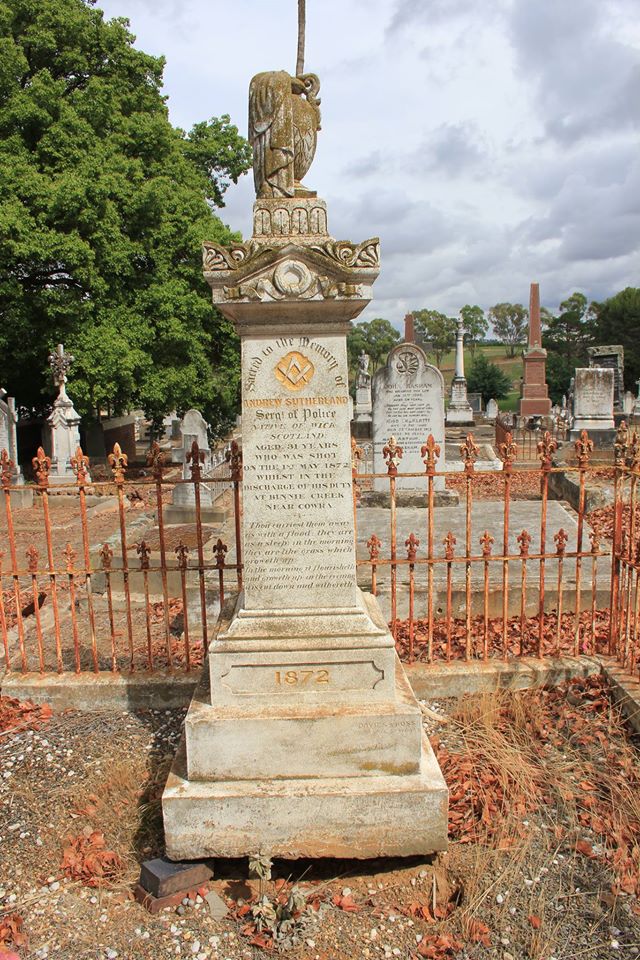 A plaque commemorates Sergeant Andrew Sutherland who was fatally shot in the line of duty as a New South Wales Police officer.

Sergeant Second Class Andrew Sutherland was shot whilst on duty at Binni Creek near Cowra on May 1, 1872. On May 1, 1872 he was returning to Cowra from Bathurst Court. En route he was told two offenders wanted for robbery, George Gray and William Bristow, were at Daniel Horan’s hut at Binni Creek, 12 miles from Cowra.

The Sergeant rode over to investigate and as he approached the door of the dwelling, two offenders emerged and shot and killed him. Gray and Bristow were subsequently arrested but both were later released without charge. No-one was ever convicted of the crime.
Actual Event Start Date: 01-May-1872

who was fatally shot whilst on police duty
at Binni Creek near Cowra
on the 1st May 1872.