Awards:  ? Not known on It’s An Honour 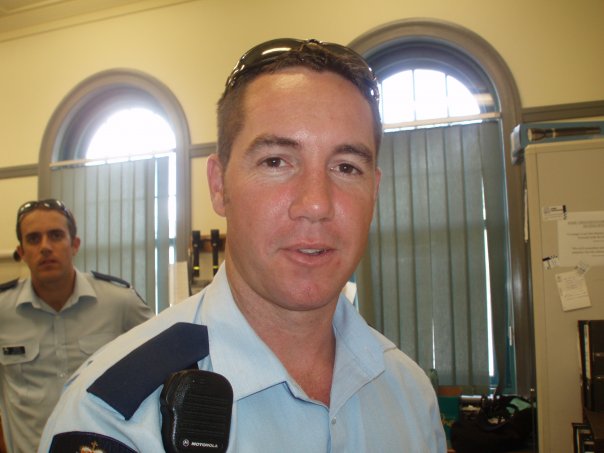 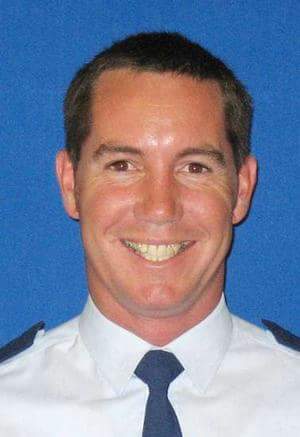 Whilst executing an arrest warrant on a male person @ 11pm, who had just robbed a hotel. Brett was shot once in the back whilst running down the stairs. The bullet went through his heart, but he still managed to get on the radio and warn his partner, who was at the front of the house, that there was a man with a gun inside, and that he was shot, before passing.

His funeral was on of the biggest in QPS history, which shows what an impact he made in just over a year of operational Policing.

CONSTABLE Brett Irwin, shot dead as he attempted to execute a warrant on a man for breaching bail conditions, had only been a policeman for a year but yesterday his colleagues said he was a fearless and courageous officer.

Tributes poured in for Constable Irwin, 33, who left the army to join the force, only to die on what should have been a routine police matter.

Constable Irwin and another young male officer went to a home in Regan Street, Keperra, in Brisbane’s north at 10.50pm on Wednesday to speak to the 29-year-old occupant about breaching his bail conditions.

Constable Irwin approached an entrance of the house while his partner remained outside.

Shortly afterwards, Constable Irwin was shot in the chest, then shouted a warning to his partner, “He’s got a gun, I’m hit” – a move Queensland Police Commissioner Bob Atkinson said had saved his partner’s life.

Last night the gunman, Craig Semirara, died in hospital from head wounds after turning the gun on himself following a standoff with police that lasted several hours.

Constable Irwin lay on the front lawn of the house the whole time, his anxious colleagues unaware if he was dead or alive.

According to a neighbour, several shots were heard and when the police tactical response team eventually stormed the home they found the injured man and retrieved the body of their colleague. During the siege, two women and two children were able to escape the house.

Colleagues said Constable Irwin’s actions were typical of the bravery he had shown during his short police career.

Constable Irwin was attached to the nearby Ferny Grove police station, where the flag was yesterday flying at half mast and a wreath of flowers had been been placed at its base.

On a police website set up to receive tributes yesterday, a fellow officer wrote about his friend’s courage.

“(Police officer) Linda Reeves says that he saved her life at the incident at the Bowls Club at Newstead,” he wrote.

“Brett was fearless. He would go into harm’s way to help his team members and members of the public needing assistance.

“Brett proved his courage and tenacity several times during his short career. Examples of this were when he subdued an offender who became violent in the courtroom whilst Brett was doing his rotation in the Brisbane watchhouse.

“This incident resulted in a phone call from the commissioner who acknowledged the good work Brett did that day.

“Another incident was recently during a break and enter at the Newstead Bowls club. On this occasion Brett and Linda Reeves were confronted by a violent male who threatened them with a star picket. Brett displayed outstanding courage and after almost having to discharge his firearm, was able to chase and capture the offender.”

Friends and family of slain Brisbane police officer Brett Irwin have paid tribute to him at a moving funeral service in Brisbane.

Constable Irwin was killed last week while on duty.

He was shot in the chest after going to the Keperra home of 29-year-old Craig Anthony Semyraha.

He had enough time to shout a warning to his partner before he died.

Police Commissioner Bob Atkinson told the congregation at Brisbane’s St Stephen’s Cathedral it was the sort of selflessness Constable Irwin had become known for.

“Motivated, professional, courteous, inspirational, loved and courageous, Constable Brett Irwin was many things to many people,” he said.

More than 3,000 police, including officers from interstate and New Zealand, joined Constable Irwin’s family for the service.

She told the congregation her brother was a man who was always there for his colleagues and mates.

“In one incident I remember you broke several of your ribs,” she said.

“The very next week the team was short of players so you got the strapper to tape a big piece of foam to the side of your chest and you went straight back out there to help your team.”

A ceremony was also held at the Hemmant crematorium where Constable Irwin’s former Army colleagues paid tribute to him.

Mr Beattie says he is sure all Queenslanders sympathise with his family.

“The whole thing was such a shocking waste of life,” he said.

“It’s going to be a very traumatic day for the family and I do want to pass on the condolences of all Queenslanders.”

Constable Irwin, 33, was shot dead last Wednesday night as he served a warrant to Craig Anthony Semyraha, 29, at a home in Keperra, in Brisbane’s north-west.

St Stephen’s Cathedral was standing room only as an enormous crowd farewelled the popular officer.

As well as police and family and friends, a defence contingent was present. Some mourners had returned from overseas for the funeral.

Const Irwin’s sister Mary Toohey delivered a eulogy in which she described her brother as “the youngest of six but the loudest”.

She said his nickname growing up was Esme Watson (from television’s A Country Practice) because he was always up to so much mischief.

We’re sorry but it seems you don’t have the required version of the Adobe Flash Player installed. The good news is that it is quick, easy and free to install.

Follow the instructions on the Adobe Flash Player download page and reload this page. The whole process should only take you a couple of minutes.

“He was a person who talked the talk and walked the walk,” he said

“He was always so energetic. I could get tired (just) thinking about what he was talking about doing.”

He said Const Irwin had a passion for police work. “He absolutely loved the fact he could help people.”.

Mr Irwin said Const Irwin was fearless and always helped his mates.  “That was Brett all over”, he said.

The funeral, with full police honours, began at 11am and included a guard of honour.

It was to be followed by a ceremony at the Hemmant Cemetery and a private wake.

Families enjoying the summer weather on the waterways and coast of Townsville will be safer following the commissioning of a new police vessel.

Police Minister Jack Dempsey said the new craft was being named in the memory of fallen Brisbane officer Brett Irwin.

“The Queensland Government has a strong plan to keep communities safe along our coast and we are proud to be delivering the second of three new police vessels,” Mr Dempsey said.

“The Brett Irwin will initially operate in Brisbane during the G20 as a command post and then be deployed to full-time operations in Townsville.

“The vessel is named after Constable Brett Andrew Irwin, who served with the QPS from December 2005 until his tragic death in the line of duty on July 18, 2007.

“Prior to joining the police, Brett had proudly served for eight years with the ADF.

“His memory within the Queensland Police Service family will never be forgotten and this lasting tribute will support his fellow officers well into the future.”

Member for Townsville John Hathaway said the Brett Irwin would support the dedicated work of the officers in Townsville.

“The Brett Irwin will serve our diverse coastal community as they enjoy days on the water in Cleveland Bay and out to Magnetic Island,” Mr Hathaway said.

“The LNP Government is continuing to achieve better outcomes and frontline services in Townsville and the addition of a new police vessel will build on that.

“Brett Irwin served his nation as part of the Australian Army and his state as a police officer, now a lasting tribute to his memory will serve the proud garrison city of Townsville.”

Commissioner Ian Stewart said the first of the three new vessels was already in service in Cairns and the third craft would be commissioned and sent to the Whitsundays by the end of the year.

“In times of disasters or major events these can be deployed as mobile command posts and as floating police stations,” Commissioner Stewart said.

“These vessels are enhanced by modern electronics and significantly increase the capabilities of the Water Police.”

The vessels are approximately 24 metres in length, their service speed is 20 knots and they have provision to launch a six metre rigid inflatable boat (RIB) from aft of the vessel.

“Our police officers will be able to stay at sea over extended periods for patrol and other duties due to the design and layout of these vessels,” said Commissioner Stewart.

A $4 million police boat is set to revolutionise police operations on Townsville waterways.

Named Brett Irwin, in honour of Constable Brett Andrew Irwin who was fatally shot at Keperra in 2007, the new vessel will give Townsville Water Police access to one of the best-equipped police boats in the country.

After being trialled during the G20 in Brisbane last month, the boat arrived in Townsville a fortnight ago and is ready for action.

“It really meets a whole range of activities, such as search and rescue, policing major events where there’s water involved,” he said.

“If this vessel needs to go to sea and stay at sea there’s substantial ability to live with a degree of comfort.”

Capable of travelling at speeds of more than 30 knots, the boat will function as a floating police station from the Whitsundays to the Hinchinbrook.

It will also be used as mobile command post in disasters and major events and as a search and rescue ­platform.

Mr Taylor said there would be opportunities to collaborate with other organisations, such as Fisheries, Customs and Marine Safety.

It will be the third vessel of its type in the region.

“The vessel has a proven operational capacity,” Mr Taylor said.

“It was funded through the police budget.’’

The Brett Irwin boasts sleeping accommodation for 10 people, a commercial-style galley and holds enough diesel fuel to travel to 700 nautical miles at cruising speed – the distance from Townsville to Brisbane.

Townsville’s former police boat, the 16-year-old Len Hooper, has been decommissioned and will be sold.