Police Service Medal – NOT recorded on It’s An Honour 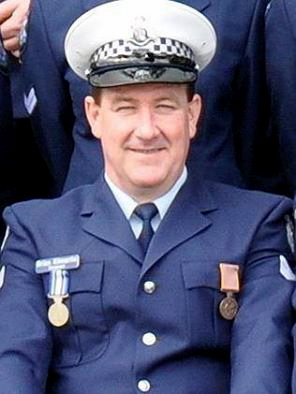 The Funeral of  Sergeant BRIAN KILMARTIN will be held in the Chapel of the Victoria Police Academy, View Mount Rd, Glen Waverley on THURSDAY (October 10) at 2.00 pm.

Brian’s interment will take place at the Tatura Lawn Cemetery (Winter Rd) on FRIDAY (October 11) at 12.00 noon.
In lieu of flowers, a donation to the Heart Foundation would be appreciated. Envelopes at the Service.

KILMARTIN. Brian Gerard.
11.6.1964 – 30.9.2013
Beloved husband of Andrea.
Loved and loving father of Joshua and James.
Youngest son of Tom (dec. ) and Pat (Kyabram/Tatura) and brother of David and Chris, Tony and Angela, Dennis and Rosemary, Brendan and their families.
Respected son-in-law of Judith Robinson.
Forever In Our Hearts
See later paper for funeral details.
Obituaries
Published in Herald Sun on 07/10/2013
KILMARTIN. Brian. Killer, you are a legend of the job and will never be forgotten.
Steve “Trigger and Robyn Waite.
KILMARTIN. Brian. Always knowledgeable, always approachable. Best Sergeant we ever had. Rest In Peace
Nick and Jo Parissis.
KILMARTIN Brian Sergeant 24519
Members past and present of Northcote Police Station are saddened by the sudden loss of our highly respected work colleague and friend.
Killer, you were a man of few words but those words were always full of wisdom and humour. You will be sadly missed.
Condolences to Andrea, Josh, James and the Kilmartin family.

A NORTHCOTE police officer known for quietly going beyond the call of duty was posthumously recognised for his outstanding service to the community.

Peers at Northcote police station were unanimous in their decision to honour the late Sergeant Brian Kilmartin with the Breavington Award, which was presented to his widow Andrea and sons Joshua, 16, and James, 14, after a ceremony at All Nations Park war memorial last week.

“He was particularly caring when it came to the elderly,” Sen-Sgt Yates said.

“When an elderly man was reported missing in Fairfield, Brian came back on his own time and continued the search. That was the kind of man he was.”

During Tuesday’s ceremony, a plaque honouring Sergeant Kilmartin and former posthumous Breavington Award winners Senior Constables Mark Bateman and Fiona Robinson (killed in a car crash in May 2000), was unveiled on the war memorial usually reserved for military personnel.

Corporal Rodney Breavington, a former Fairfield resident, was executed by the Japanese in Singapore in 1942 during World War II after escaping from a prison camp where thousands of allies were held.

He and three other prisoners were forced to dig their own graves before facing a firing squad.

Breavington pleaded with his executioners to shoot him and free the other men but his captors ignored the plea.

He refused a blindfold and clutched a photo of his wife as he was shot dead.

Darebin RSL spokesman Bill Mountford said police, like other servicemen and women, put their lives on the line.

He said it was fitting that recipients of the Breavington Award who’d lost their lives while serving their communities should get recognition with a plaque on the war memorial.

But Mr Mountford said he hoped there would be no need for any more plaques to be awarded posthumously.