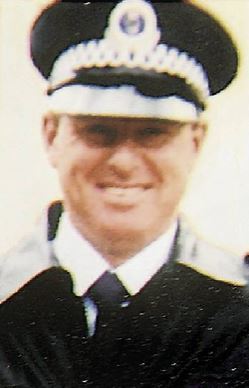 No Find on Australian Honours system

Thin Blue Line pays silent tribute to one of their own

IN a week clouded by grief, the region’s police demonstrated a show of unity yesterday at the funeral of colleague, Senior Constable Bruce Gallagher.

Onlookers were held breathless as more than 160 police formed a guard of honour and another 40 officers, led by Lake Illawarra police Superintendent Mick Plotecki and two mounted riders, escorted the cortege from Hansen & Cole at Kembla Grange.

Snr Const Gallagher‘s daughters Jessica, 17, and Jordann, 15, did their father proud, marching with his police hat and photo.

Jessica and Jordann remembered their dad as a loving man who was always ready with advice and support.

“I was always so proud to tell people my dad was a police officer,” Jessica told yesterday’s service.

“Dad, I am so grateful you taught me so much in life … I know you would not have left us if you didn’t think we could cope.”

Jordann added: “From the very first time you held me to the last time you saw me, you were always there for me no matter what, and I will never forget those memories.” Brother Mark Gallagher read a message on behalf of Snr Const Gallagher‘s wife Shirlena.

“You were my best friend, my husband and father to our two wonderful girls, but most of all you are my soul mate … I will never let you go. You will stay in my heart forever. Wait for me sweetheart, because one day I will be in your arms again.”

Mr Plotecki said Snr Const Gallagher displayed a strong work ethic that had earned him many accolades from the time he joined the force in May . ( 2001 )

“Bruce’s name was often put forward as being involved in very meritorious and commendable police work,” he said.

“I have no doubt he had the potential and capability to add an even more significant contribution to his chosen profession.

“My last duty as Bruce’s commander is to pass on a message to his family, on behalf of the people of NSW. It’s a simple message, consisting of two words: ‘Thank you’. You were a real credit to your police uniform.”

Chief Inspector Bob Noble said that after meeting Snr Const Gallagher‘s wife and daughters, it was clear he was a reflection of a loving, supportive environment.

“The importance of family support in policing is paramount and it is for this reason that Bruce’s family has been, and will forever remain, a part of the police family,” he said.

Chief Insp Noble read a letter from colleague Senior Constable Chris Warren who said his close friend’s sudden death had left everyone in a state of shock.

The two men had joined the force at the same time, representing “two older blokes who were fulfilling a lifelong desire”.

Illawarra residents have been urged to “whinge” less and appreciate the good work of the NSW Police Force.Uniting Church minister and police chaplain Reverend Gordon Bradbery told yesterday’s Police Remembrance Day service that people “whinged” too much about peripheral concerns when they should be thankful for the things that were really important.

Assistant Commissioner Robert May, Wollongong Police Commander Wayne Dedden and Lake Illawarra Commander Mick Plotecki were among those who attended the service at Wollongong’s Wesley Church on the Mall.

Another Illawarra officer to lose her life in the past 12 months was Constable Elise Krejci, who was killed in a car accident on Picton Rd, three days after Snr Const Gallagher’s death.

Back from a visit to Third World countries in South America, Rev Bradbery told the service that he had witnessed terrible scenes that made him appreciate living in Australia.  “What a great country we live in, what a land of opportunity,” Rev Bradbery said.  “But suddenly I am aware that on occasions like this, when we gather to remember the safety and security that we have in our community, how it has come at a cost.  “I am conscious of the fact there are men and women who have lost their lives in the interests of policing this state – what it is when we don’t have to live in a land where our police wear flak jackets and carry machine guns.”  He said that in appreciating these blessings, the community must also acknowledge they had come at a cost, sometimes in police lives.”  They have gone beyond, they have given not only of themselves, but ultimately their breath and their pulse.”