Died on: Friday  6 September 2019 during the morning

“It is with immense sadness that I tell you our beloved husband, father and grandfather Hugh Hargreave went to heaven earlier today. He was loved by all who knew him and we will miss him forever.”

KimSteve Beaumont is with Hugh Hargreave and 2 others.

They say things come in threes. I’m not sure who ‘they’ are, but I hope they’re right! Yesterday we lost a dear dear family friend Hugh Hargreave. One of Steve’s best mates, a 2nd Dad to Jayden and one of the kindest, loving, most sincere and authentic people we have ever known. We are all better people for having known him. Our loss, is Heaven’s gain.
This is our third close death in 5 months. It feels like death is surrounding us atm. But, If there is one thing I have learned these past months , it is that death isn’t the end – but really just a doorway.
Earth isn’t our ‘forever home ‘ And Hugh was so looking forward to finally ‘really’ going home to be with Jesus and those he loved, including our Cody. (which he bragged about seeing him before Steve did❤️)
We often say Rest In Peace and for Hugh he carried that peace right to the very end of his life here on earth because he knew this wasn’t the end and he knew where he was going !
Hugh Hargreave R.I.P – Raised in Power! 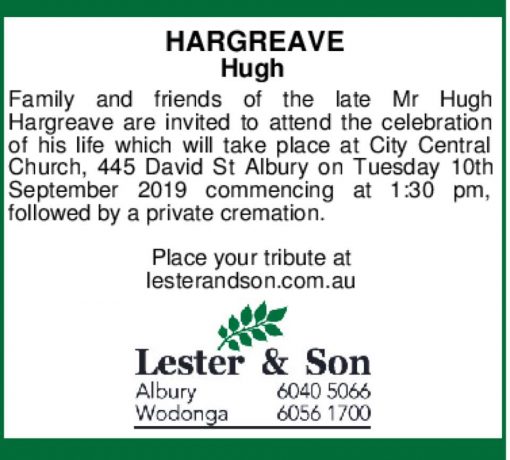 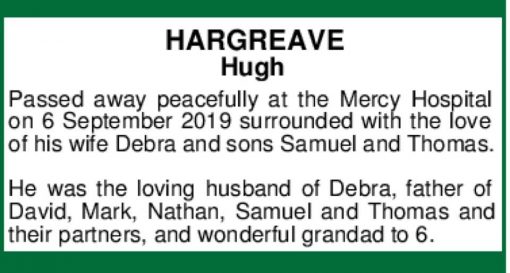 Deb, David, Mark, Nathan, Sam and Thomas. Most of the police names mentioned below met Hugh back in the early 1970s at Cabramatta. Cabramatta at that time was a small police station being about 3mtr by 3mtr square. A new station was built which was about 3 – 4 times the size of the original Call Box.  They later moved into the house, on the same block of land, which was originally a police residence.

Being a small police patrol, the police there became very close and a close personal bond was formed. This bond has continued from the 1970s until the present time. We all went along our individual career paths, but, most of us continued to keep in touch with each other. In July 2017, Hugh, Deb and a few of the original guys from Cabramatta flew to Alice Springs to see another one of it’s crew, Bill Espie, inducted into the Hartley Street School Museum, such is the closeness of those original Cabramatta guys.

Deb, David, Mark, Nathan, Sam and Thomas, your husband/dad was a great person to work and socialise with. He was a dedicated police officer, who carried out his duties in an honourable, professional manner. It was a privilege to not only know Hughie, it was an honour to be able to call him a good mate

The following retired police officers who worked and knew Hugh would like to be remembered by the Hargreave family.

May you Rest in Peace Hughie.

Yesterday I received a telephone call from a work mate (Peter Croucher) whom I last worked with 37 years ago. It was like we had seen each other yesterday.

I was privileged to have worked at Cabramatta when there were only 8 police. Two were aboriginal.

No one thought of anything other than respect for each other. It was an extremely busy and happy station.

I remember my first two weeks being like a baptism with fire. I attended and investigated 3 separate deaths and a fire that went to a hearing at the Coroners Court. At the end of the two weeks the boss came up to me and shook my hand and welcomed me to the station.

It was a privileged to work at this station for 7 years with an amazing group of police and two amazing commanders. They earn your respect and were the most supportive bosses I ever worked for. Trust is earned and does not come with the rank.

Peter has been researching and has now had a memorial approved for Bill Espie, who was the first aboriginal police officer to reach commissioned rank in NSW. This will be a proud moment when it is unveiled in Alice Springs where Bill was born. I am looking forward to catching up with some of the guys from the station.

It is the dedicated guys I have worked with over many years that makes my time in service such a great experience for which I am thankful. These guys at Cabramatta were amazing. We had each other’s back and were busy all the time. What an amazing time.

Debra Hargreave is with Hugh Hargreave and 2 others.

Hugh Hargreave was awarded the National Police Service Medal, the Commissioners Olympic Citation and the Retired Pin today in a ceremony at home. So lovely to see the respect people have for him, and how happy he was this afternoon. Thanks to all for their involvement to make this possible. 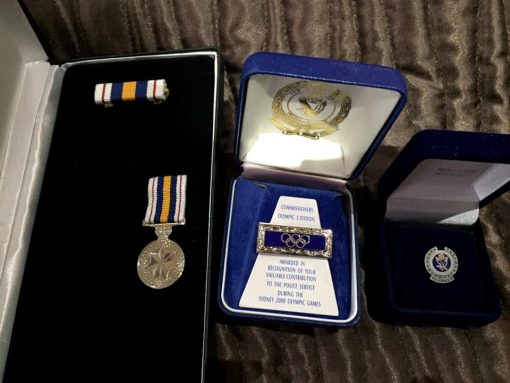