Constable 1st Class ( during the War whilst with RAAF ) 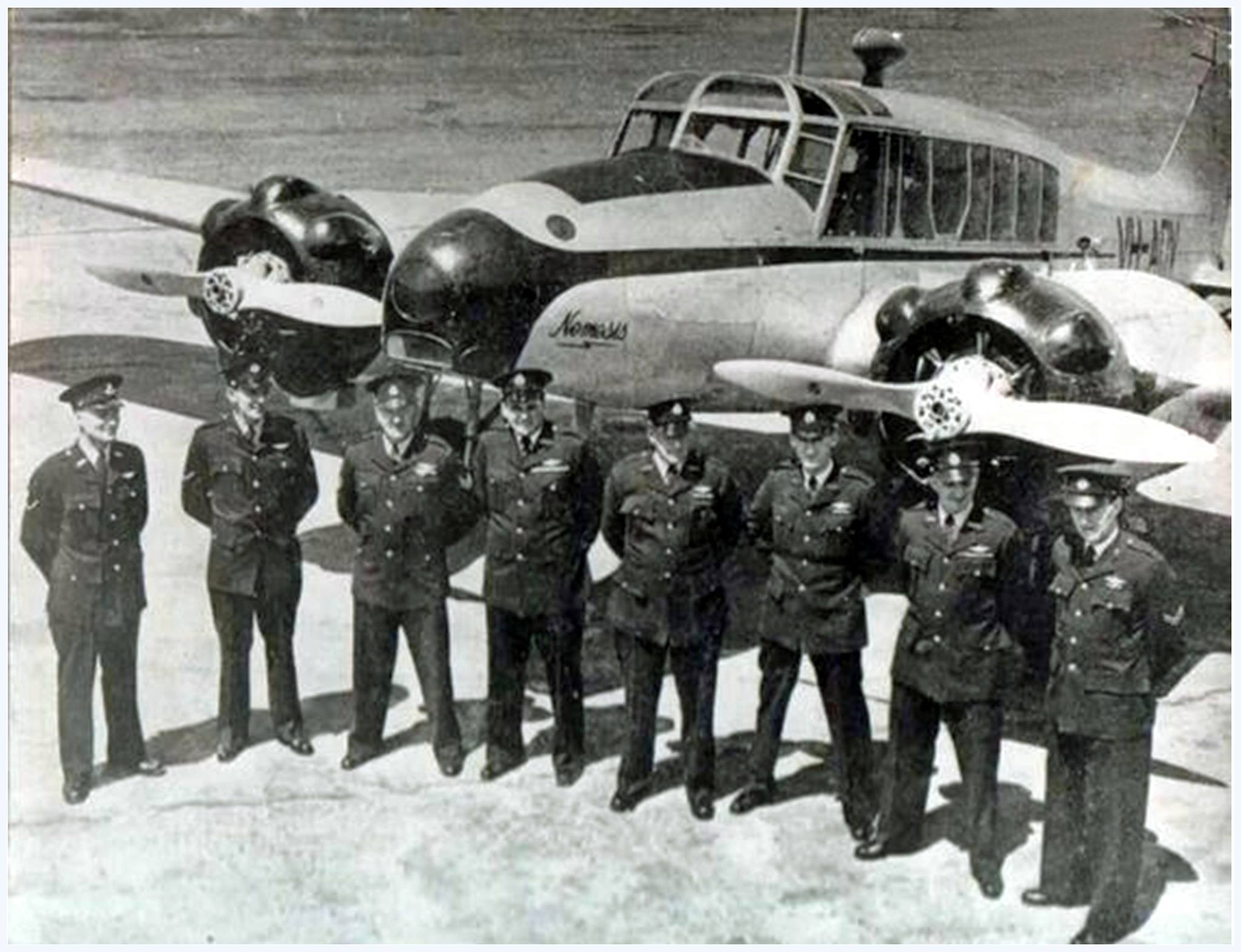 Frederick Hanson was born the eldest of four children to Ernest Frederick Hanson and Vera Marie Hanson. He did not remain in Orange for long before moving to Burwood where he was educated at the Christian Brother’s Saint Mary’s Boy’s School. He became a jeweller’s assistant before being hired as a porter with the New South Wales Government Railways. Hanson joined the New South Wales Police on 7 September 1936 at the age of 22 and the next year was posted to Broken Hill where, in the Sacred Heart Cathedral, he married Carole Louise Whitehall with Catholic rites on 9 November 1938. In 1940 Hanson was transferred to plain clothes duties.[1]

Hanson served in the Citizen Air Force from 1932 to 1936 and obtained a private pilot licence in 1939. On 31 January 1942 he was transferred to the Royal Australian Air Force. Commissioned on 14 January 1943, Hanson served as a pilot in Britain, the Middle East and Ceylon (Sri Lanka), and was mentioned in despatches. On 30 January 1946 he was demobilized as acting squadron leader and returned to the police.[1]

Hanson was promoted to the rank of Constable (first class) while on active service and briefly posted to the vice squad before being transferred to the police air wing as Sergeant (third class).

Such rapid advancement in an organization which was committed to seniority based promotion resulted in a number of appeals. The first appeal was rejected and the remainder were withdrawn which allowed Hanson to overtake more than a thousand other police on the seniority list. After this he became known as ‘Slippery’.

The air wing was disbanded in 1950 and Hanson then moved to the new Number 21 Mobile Division.

Hanson served as an Inspector (third class) and also officer in charge at Bega (1959–62) and Wollongong (1962–64) before moving to the Metropolitan Police District as a Superintendent (third class).

After attendance at the Australian Police College in 1963, Hanson rose to Superintendent (first class) and Assistant Metropolitan Superintendent in 1967.[1]

That year he also attended the general assembly of the International Criminal Police Organization at Frankfurt, Germany.

In 1974 he visited the Australian police contingent at Cyprus.

Hanson gained widespread support in 1975 when he initiated aggressive street patrols to counter hoodlum activity, however he failed to control illegal gambling which was to become a major public issue.

In 1976 Hanson sued the then Australian Broadcasting Commission for defamation when it had been suggested that he had a financial interest in an illegal casino situated at Gosford; the case was later settled out of court.[1]

Pressured to resign after adverse publicity, he delayed doing so until he was replaced in 1976 by his preferred successor and air wing colleague Mervyn Wood.

Further allegations of corruption were made against Hanson in the 1980s.

Hanson was a modest however humorous man, he kept his family life extremely private. He was a noted practical joker and esteemed by his subordinates for his genuine interest in their welfare, his readiness to delegate responsibility and his unwillingness to be hindered by red tape.

Survived by his wife, Hanson died from carbon monoxide poisoning by inhalation on the night of 25 to 26 October 1980 at his Terrigal home; the Coroner dispensed with an inquest and Hanson was cremated.[1]

There were persistent allegations about Hanson’s involvement in organised crime, and was repeatedly claimed that he corruptly received payments from criminals and that he was the part-owner of an illegal casino at Gosford, in which former detective Ray “Gunner” Kelly is also alleged to have had an interest.

Hanson featured prominently in The Prince and the Premier, the 1985 book by investigative journalist David Hickie, which canvassed allegations of corruption against senior NSW government officials, including Premier Robert Askin and senior police including Norman Allan, Hanson and Merv Wood.

Hickie specifically named both Allan and Hanson as corrupt, stating that they knowingly allowed illegal casinos and illegal SP (off-track) betting to flourish in NSW. Citing an “impeccable” and highly placed source within the illegal gaming empire established by Perc Galea, Hickie alleged that Askin and his police commissioners, Allan and Hanson, were paid bribes amounting to A$100,000 per year from 1967 until Askin’s retirement.[2]

Another of Hickie’s informants, a former croupier at Galea’s Double Bay Bridge Club, claimed that A$5000 per week from the club was paid in bribes to Hanson and Askin.[3] Hickie also notes that Hanson was among the mourners at Galea’s funeral in 1976.[4]

In 1979 John Hatton, an independent politician claimed in the New South Wales Parliament that Askin and Hanson knew of and may have even encouraged the penetration of Australian crime by “overseas mobsters, gangsters and the Mafia“.[citation needed] 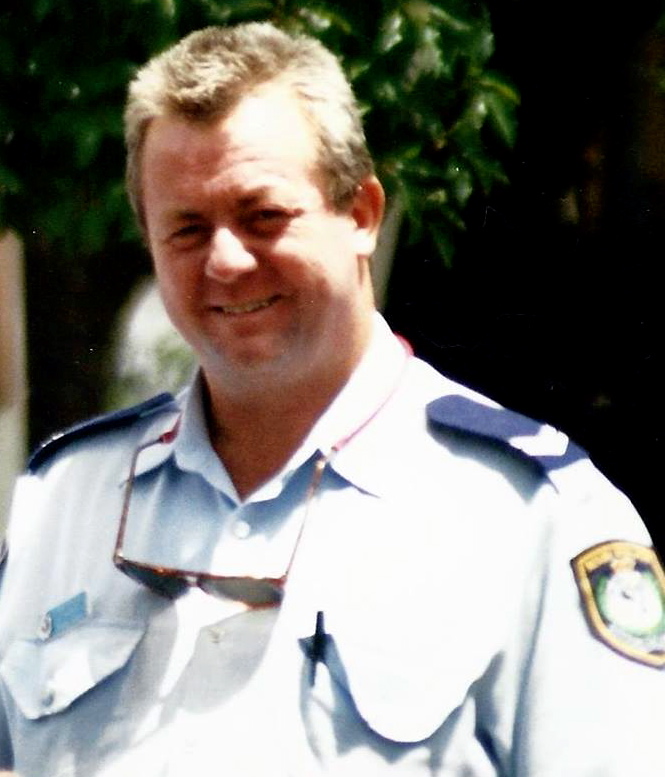 FURTHER INFORMATION IS NEEDED ON THIS MEMBER.

[divider_dotted]
Having been contacted by the family, Aaron & Leanne HUGHES, in July 2017 – the cross located at Lower Portland Cemetery is the location at which Craig took his life.
Craig is actually buried at the Pinegrove Cemetery location.
May he forever be Resting In Peace
[divider_dotted]

Buried at:  Cremated & Resting in the Fountain Garden, Nicholson plot,

* Stemming from the continued work of the wives & parents of four Fallen NSW Police to Suicide – those four names will now be included in the newly refurbished NSW Police Wall of Remembrance, Sydney, as of 2017

Scott was a member of the New South Wales Police Force for 13 years and, suffering from the effects of PTSD ( Post Traumatic Stress Disorder ) took his own life on the 14 November 1996 by gassing himself in a car and leaving behind two children, aged 6 & 9 ( at the time ) and a wife.

Scott worked at various stations such as Campbelltown in the 1980’s, Camden and the One Man station at Bulga before leaving the Police Force and gaining employment as a Ranger with Liverpool Council.

[divider_dotted]
Dimmy Nicholson Hi, my late husbands name is Scott Andrew Nicholson reg number 20237 who died by gassing himself on 14th November 1996 shortly after he resigned from the job when he could no longer cope with his PTSD, worked at Campbelltown police, Camden, one Man Bulga Police Station, Fraud Squad both in uniform & D’s, Child Mistreatment & others. Hope that’s enough info & thank you for all u do
October 19 2014  at 9:51am · Like · 9
Wife = Sharon
Dimmy Nicholson
[divider_dotted] 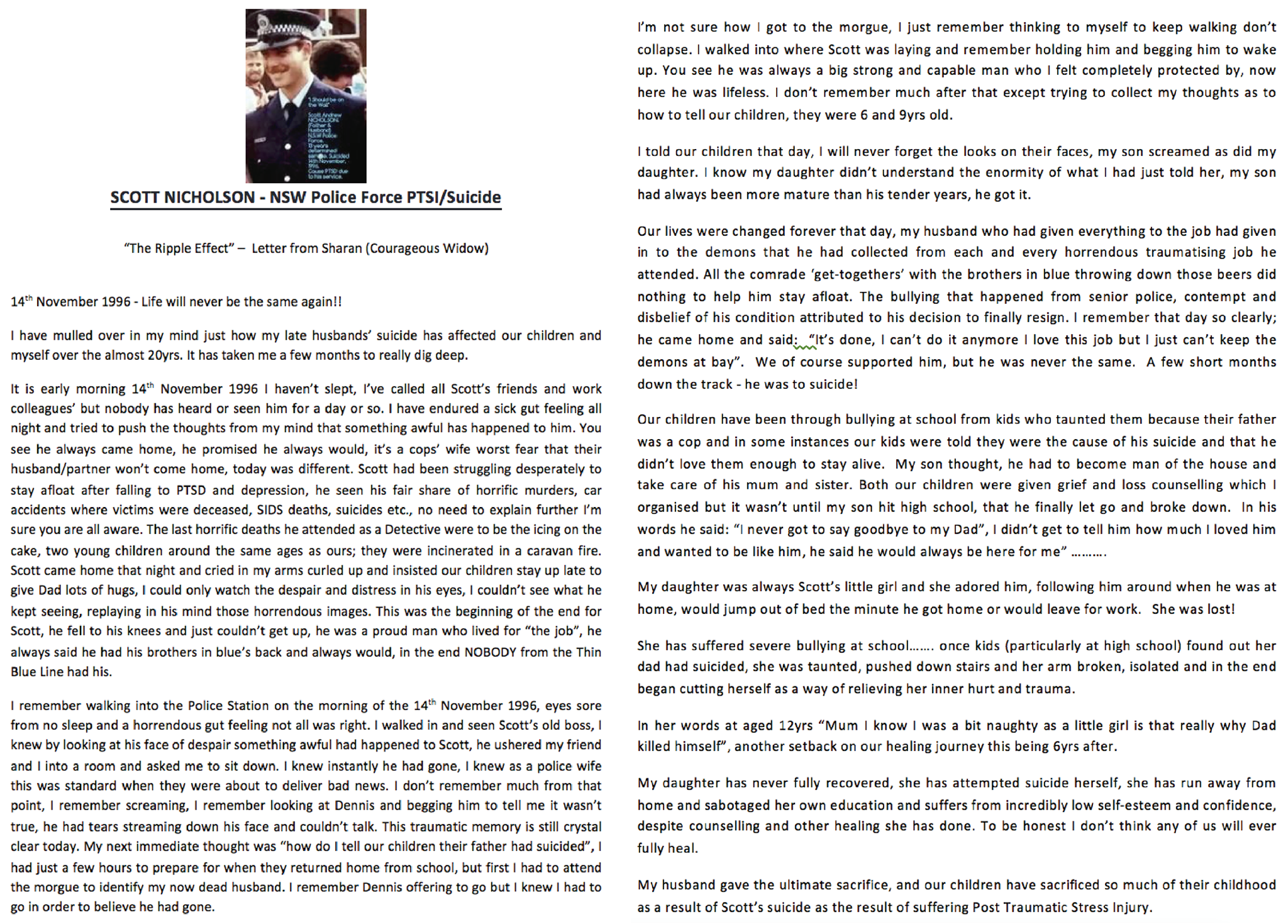 PLEASE EVERYONE I ASK THAT YOU TAKE THE TIME OUT OF YOUR LIVES TO READ MY STORY. I’M LISA NICHOLSON AND MY FATHER WAS SCOTT NICHOLSON.

[blockquote]Hi my name’s Lisa Nicholson and my father is Scott Nicholson. They say we are one big police family and we look after our own yet they don’t even care to see the damage there doing. My dad suicided when I was just 6 years old he was my world my life my everything. The day he died my world fell apart and the older I got the harder it hit me. I suffered and battled countless years of depression, I was raped and beat as a child and teenager and I had the balls to follow this through with court. But, tragically, all of this led to many suicide attempts.

Thankfully my dad had my back though I actually believed the world was so awful and painful that I belonged with my dad. I had a very hard time seeing other officers thinking that’s my dad he is as good a officer as you, yet why is he not remembered!??

He was so proud to be an officer and truly lived through his work right to the end! The end that the line of work he did helped drive him too!!! He worked his ass off to get the respect and acknowledgement that he gained and I’ve always been so proud to say that my daddy was a police officer!! Yet here these ass wipes are claiming that everything my father worked for his whole life everything he believed in and followed isn’t recognised. They claim that we’re one big family and in truth it has felt like that thanks to police legacy but then there’s the fact that I’ve got to, every single day, deal with the emotional grief that I will never see my daddy again and then there’s the fact that the man I love so much and am so proud to say he was an officer will never meet my daughter and my daughter will never meet her grandfather and that, in itself, has me pretty low but on top of all that these guys wanna destroy me; even more, give me no choice and take whatever is left in me to fight to have my daddy’s name on the police Remembrance wall; a wall that all our fallen officers are on, all except the ones who took things into there own hands. We’re one big family yet not only has their line of work taken my father and my daughters grandfather but they wanna take everything that I’ve left because they won’t respect what they’d say “one of our own” my dad deserves that respect and so do so many others and again they say we’re one big family but can they even see that their own choices, actions are killing us even more!!!!

I know I’m not the only one but I can only speak on behalf of myself. I wanna know why?? my daddy, the man that the only image I can recall is of him in his uniform, the man who tragically lost his life, the man who they claim death is not tragic enough to be remembered. Why??? I wanna know why?? my dad’s dead the same as officers who’ve died in the line of duty. Dead not coming back; he died from the pain and suffering from his job and they die in the line of duty but they’re telling me my dad’s death isn’t good enough or tragic enough.

No wonder half the population have lost faith in these guys. I will continue to support and stand tall and for as long as I can with everyone else and I won’t ever stop speaking out.

Your secret is no longer!

He will be remembered.

Thank you for reading my story. Please like and share this around. The more this gets around the more I hope will get in their face and finally remember all our lost men and women.

Police Officer Suicide Should Be Included on The Wall Of Remembrance
Thank you for sharing such a deeply personal and heart wrenching story of your journey Lisa! This is so courageous of you. The impact that your father’s death had on you and your family is something that the Police force haven’t been around to witness, acknowledge or support and sadly have contributed to your grief in doing so!
Glad to have you on this journey with us Lisa! Xx
Like · Reply · 3 · 2 hrs