Rank:  Commenced at Brewarrina Police on ? ? ? 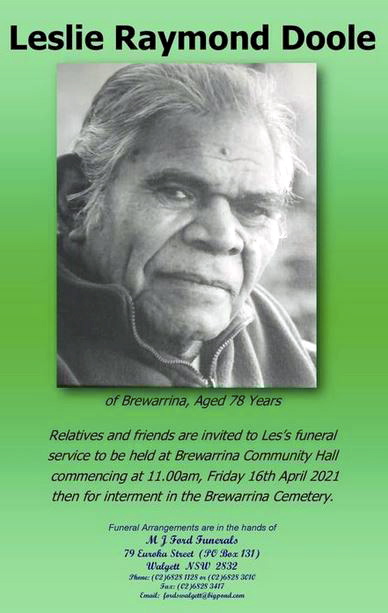 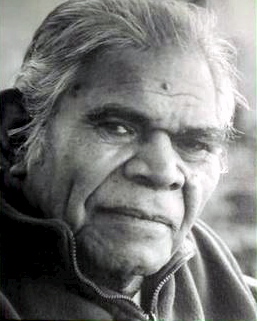 @djo_aus
VALE : Leslie Raymond Doole, 78 yrs of Brewarrina. A NSW Police Aboriginal Liaison Officer for many years in that community. Les was a big man with a big heart & worked tirelessly in his role to improve outcomes for his community.
10:08 PM · Mar 27, 2021·Twitter for iPad
1

As a consequence of Les’ long service & role he played in that community, he was viewed in awe by Police Commissioners. Innumerable members of his community, young & old, were the benefactors of positive outcomes after interaction with Police.

Importantly, the positive outcomes facilitated by Les in his role, often led to many life journeys by young Aboriginals, fulfilling their potential & dreams. Les, R.I.P., & be assured you made an amazing difference for your community, particularly the young.

You also made a significant contribution to NSW Police & the 100’s of young officers you nurtured, educated & worked side by side with. You were an amazing man, an amazing Aboriginal leader & will not be forgotten.

Late of Tennyson, NSW then New Zealand ( past couple of years )

Served Mt.Hagen, Rabaul, Lae, Tomaringa with mobile squads and later at the Joint Services College, Lae and during the Bougainville emergency.

Being aware of the danger to a large amount of police ammunition he proceeded to throw it out of the armoury before it too exploded.

Unfortunately, this award is unrecorded.

Relinquished T/Capt and appointed to Reserve of Officers CMF 26/3/1974.

Returned to New South Wales firstly to Springwood and then to a property “Mistley Grange” at Tennyson, NSW.

Awards: Medal of the Order of Australia – OAM – Awarded 8 June 2009 for Service to the community through the Australian Light Horse Regiment ‘A’ Troop.

There are records in the name of John Russell Stewart THOMPSON receiving the National Medal, 1st & 2nd Clasps but they also mention that the person was a Fire Fighter – so I am not sure if those references are to our man. 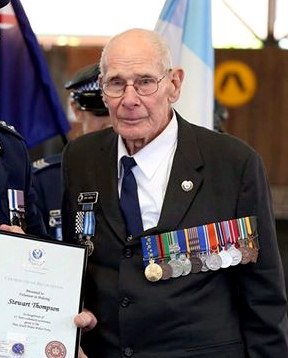 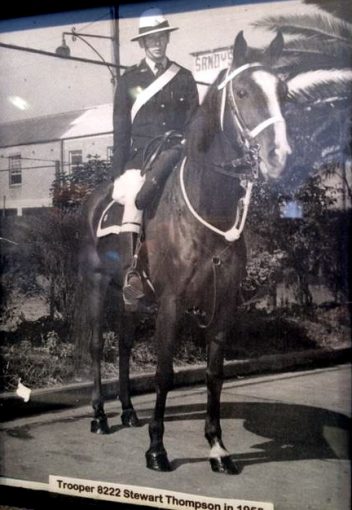 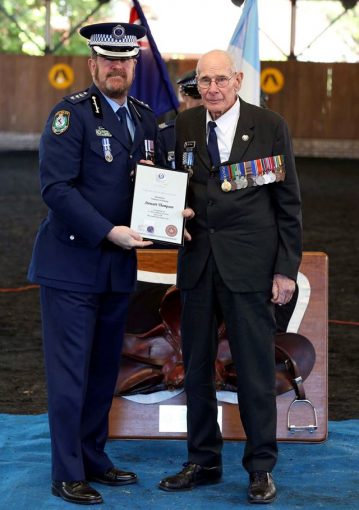 Our Volunteer in Policing Mr Stewart Thompson has hit some career highlights in his years.  Stewart is 81 years of age, yet attends the NSW Mounted Police every Tuesday to assist with the Tour Groups and in the Museum. He rises at 4:30am in summer and 5:30am in winter, to feed his 16 horses, before boarding a train to the city, where he imparts his knowledge of our unit to the community.

For an 81 year old, Stewart does pretty well. He still rides each week and is in charge of the A Troop Richmond, Windsor as part of the Australian Light Horse. He runs his own museum, which is open to members of the public, displaying a plethora of both police and Australian Light Horse memorabilia.

Stewart joined NSWMP ( Mounted Police ) in 1955 and was stationed at Bellbrook Police Station in 1958. He was the last Mounted Officer at an outstation, when in July 1961 the Land Rover replaced the horse at Bellbrook.

Stewart continued his police service at Kurindi and Katoomba and resigned from the Police in 1969.

Stewart then rejoined the Australian Army (where he was stationed at Ingleburn prior to his Mounted Police service) and he served in the New Guinea Army.

We wish Stewart and his wife Joan, a very happy celebration of 60 years of marriage next year! A fantastic milestone for a wonderful couple.

In opposition to the above information about ‘Stewarts’ Policing service – which was obtained from the Police Mounted Unit; upon his death, NSWPF advertised that ‘Stewart’ was performing duties at Katoomba at the time of his disengagement on 7 November 1955, completing 13 years service with NSW Police Force.

He does NOT appear in the 1969 ‘Stud Book’ which also verifies this data.

Unable to find any further information on Stewart – either Military, Private or Police, than what is above.