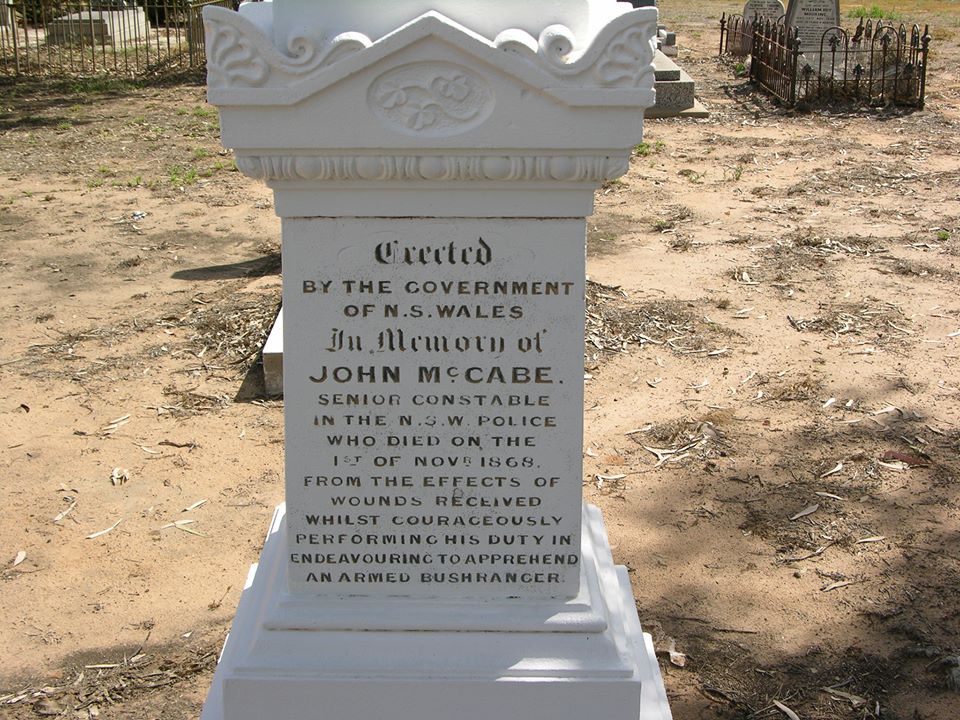 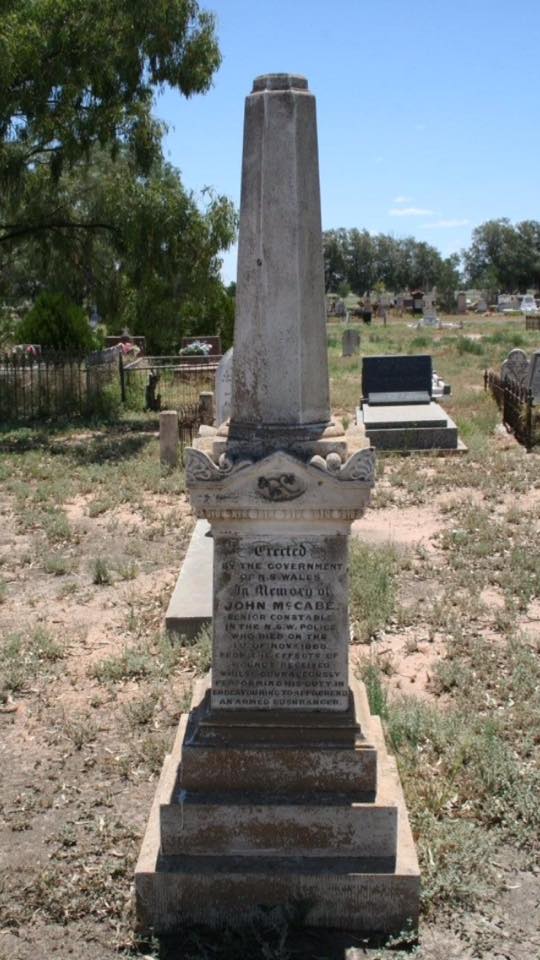 On 6 October, 1868 Constable McCabe was searching an area near the Queensland border for bushrangers Frank Pearson (Captain Starlight) and Charles Rutherford. He was accompanied by Constable Hugh McManus of the Queensland Police Force. During their patrol the police stopped for supplies at Shearer’s Inn, Enngonia (about 100 kilometres from Bourke). While they were so engaged, two riders appeared and entered the inn. Almost immediately, Pearson yelled “Bail up!” with the obvious intention of robbing those present. The two police, who had taken their weapons into the inn, turned and fired at the two offenders. Constable McCabe, who had dropped to one knee and fired, was shot in the chest, however he managed to fire several times, hitting Pearson in the wrist and right arm. The two bushrangers then ran from the inn and escaped. After rallying for almost a month, Constable McCabe died as a result of both his wound and the resultant infection. ( This murder is sometimes incorrectly attributed to small-time New England thug and armed robber Fred “Thunderbolt” Ward ).

The Maitland Mercury & Hunter River General Advertiser of 27 October, 1868 featured a lengthy article, informing its readers that “Immediately upon the termination of the encounter a special messenger was dispatched from Shearer’s to Bourke, a distance of seventy five miles, for medical assistance. Dr. Roberts, in company with Sergeant Cleary, were promptly upon the spot and the ball has been extracted from McCabe. Its course was through the left breast, passing through a part of the lungs, and finally lodging under the shoulder-blade. Although in a critical state from such a dangerous wound, Dr. Roberts anticipates a favourable result.”

Despite the doctor’s confident prognosis, however, Senior Constable McCabe passed away a few weeks later.

The senior constable was born in 1828 and joined the New South Wales Police Force on 23 February, 1863. At the time of his death he was stationed at Biree (Brewarrina).  Biree (a small outpost Station believed to exist only from 1865 to 1869 in the river country between Brewarrina and Enngonia).

Death of Constable McCabe.— The Bourke correspondent of the Dubbo Dispatch writes: —

‘ It regrets me to have to apprise you of the death of McCabe. The poor fellow expired at Shearer’s on the 1st instant, I understand that he lost the use of his senses for some hours previous to his death, but felt no pain, mortification having set in on the left side, extending from the shoulder to the foot. Dr. Roberts has gone out to examine the body, I presume for the purpose of making a post mortem examination. No magisterial or coroner’s inquiry, as far as I can learn, has been, or is to be held. The perpetrators of this murder are closely pursued by five of the Queensland black police and an inspector. After leaving Dowling’s, instead of going into Queensland, as was thought, they followed the Paroo down as far as McGilverey’s station, and then crossed to the Darling. On their way over they were seen by a shepherd twelve miles from the Darling River, at a station of McGilverey’s. They afterwards robbed a hut on the river of every particle of rations, and made for Acre’s back country, on the south east side of the Darling, at which point the black troopers were last seen on their trail, only a day or so behind them. The troopers’ horses, owing to the manner in which they had been ridden, were very weak ; scarcity of water was also telling a tale upon them. Rutherford is well known in this district ; he used to shepherd at Belalie on the Warrego. The other man, who was shot by McCabe, carries his arm in a sling, has a hooked nose, is short, and has dark hair. Rutherford’s description I have been unable to ascertain, but there is hardly any mistaking the pair. Everyone that has seen them identified them at once. They have gone either to Wentworth or to Balligool, or in that direction, and I would advise the Dubbo police to telegraph to both places. I learn that the brave fellow, McCabe, put two balls into the unknown bushranger — one, a revolver bullet, went through the arm below the elbow, and the other from the carbine went through the fleshy part of the muscle, and lodged under the shoulder skin, but in a place where not but a surgeon could extract it. How the fellow has managed to get on so well is a miracle. ”