Leading Senior Constable – appointed ? ? ? ( NO SUCH RANK AT THIS TIME ) 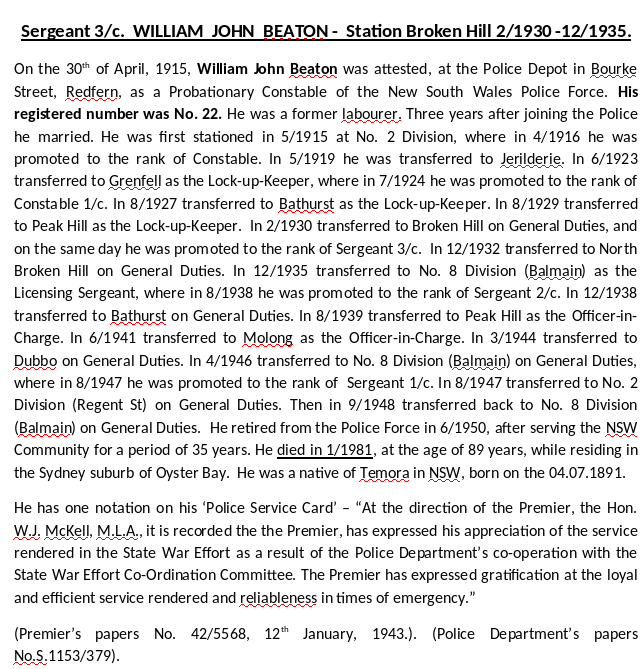 When Mrs. Frank Myors, who resides with her children in the cottage adjoining Spalding’s Garage, went to the front of the house to look for her two-year-old baby boy, Charles, she was horrified to see his body floating in the shallow water of the ornamental fishpond which receives the water from a fountain in front of the house.

She lifted the baby out and her call brought Mr. Alan McMahon, her neighbour, to her assistance, and Mr. Phillips, and Mr. Long ( of the Railway Refreshment Room ) both qualified first aid practitioners, were quickly applying treatment. Dr. Wilson was summoned and administered oxygen, but though at one stage some slight response gave a glimmer of hope, efforts at restoration were finally abandoned. Nothing definite can be ascertained as to the events which led up to the tragedy, but the presence of a severe bruise and an abrasion on the little victim’s forehead, suggest that he struck the base of the pedestal of the fountain in falling forward and was rendered unconscious or semi-unconscious by the impact. The water is about fifteen inches deep and such a sturdy child as he was, would almost certainly have scrambled out if he had not been dazed or stunned. The shallow basin contained a number of gold fish, and it was probably his interest in them which was responsible for the tragedy. A sad feature was the fact that the fish had been given away, and Mrs Myors was only waiting for the new owner to take the fish, to have the basin emptied. The Molong police immediately communicated with the child’s father, Pte. Frank Myors, who is at a northern battle station, contact being made with him within an hour. He was immediately granted leave but it is impossible that he can reach his home till today ( Thursday ). Much sympathy is expressed with the relatives of the child, who is a grandchild of Mr. F. H. Myors of our town. The remains were laid to rest in the Church of England portion of the Molong cemetery, Rev. J. Leighton Edwell officiating, McKeowen’s Funeral Service having charge of the funeral arrangements. At 4 o’clock yesterday ( Thursday ) afternoon, the local Coroner, Mr. J. H. Caldwell, held an enquiry into the cause of death and, after hearing the following evidence, found that Charles Francis Myors occidentally died from asphyxia from drowning when he fell into an ornamental fish pond in the grounds of his residence in Watson Street, Molong, on 5th Oct. Sgt. William John Beaton deposed: At about 11 a.m. on Tuesday, 5th inst., on hearing that a child had been nearly drowned I proceeded to Spalding’s Service Station in Watson Street, Molong, where I saw Dr. Wilson and first aid men applying resuscitation methods to the child, whom I knew as Charles Francis Myors. The child was lying on the floor of the garage. I learned that some little time previously the

child was taken from a fish pond by his mother. The fish pond is situated at the front of the child’s residence in Watson Street, Molong, next to the garage. I later examined the fish pond and fountain. The wall on the extreme outside of the pond would be about 2 feet in height. There was between 1 foot and 18 inches of water in the pond. The inside section of the pond which supports the fountain is built of concrete and all round has a jagged surface. I later viewed the body of the deceased and I saw a bruise on the forehead which I presumed could have been caused by the child’s head coming in contact with the inside wall of the pond in overbalancing when

making an attempt to retrieve something from the water. To Coroner: The bruise was slight. In my opinion the bruise could cause slight unconsciousness, which would cause the child to be unable to struggle out of the water. Dr. Gerald Barry Wilson deposed: On the morning of the 5th at about a quarter to 11, I received a call to go to Spalding’s Garage. On arrival I saw the body of Charles Francis Myors. The child was apparently dead, and Mr. Phillips was performing artificial respiration. The child was suffering from asphyxia and there was a considerable quantity of water in the stomach and lungs. With the aid of others I continued artificial respiration for about an hour and a half without affect. Death was due to asphyxia, caused by

drowning. There was an old scar on his forehead. I examined the fish pond and the jagged edge of the wall. It would be possible for him to strike his head on the wall in overbalancing. A child of that age, if he were injured or not, would probably not be able to recover himself if he were in difficulties. To Coroner: In my opinion everything possible had been done to restore the boy, some of those assisting were certificated first aid men. Mrs. Norma Myors deposed: I last saw Charles Francis Myors alive at about 10,30 a.m. on Tuesday morning. He was riding round the front bedroom on his bike. My daughter was ill in the bedroom. I went on with my laundry work at the back of the premises. The next thing I heard my daughter call out to me; it was about 10 minutes to 11. I walked to the bedroom door, and one of my shoes was lying in the middle of the bedroom floor and the other one was missing. I naturally concluded that the deceased had placed it in the pond at the front of the home, and I hurried to the pond to regain possession of it before it became soaked with water. On arriving at the pond I found my baby. As I came down the steps I saw what I though to be one of the children’s dolls floating on the water, and when I walked over I saw it was my baby. He was lying face upwards in the water. I grabbed him up and screamed for Mr. Young. I took him into the garage. It was a habit of his to put everything in the pool when playing. I think Allen McMahon took him from me, and I think Mr. Young went to the telephone. To Coroner: He always played near the pond, but we had never seen him climb on to it. To Sgt.: The boy’s body was limp when I lifted him out of the water. He was a strong child. He was not insured. Walter Lyndoch Young deposed: I am a motor garage manager and reside at the Telegraph Hotel, Molong. At about a quarter to 11 on the 5th, Allen McMahon and I were standing in the shop and I heard Mrs. Myors call out for me. We both rushed out and Alan McMahon met Mrs. Myors at the door and took the child from her. I told him to place it on the counter; he applied aid and I rang for the doctor and sent a messenger for Mr. Phillips, who arrived in a few moments and he applied first aid. The doctor arrived shortly afterwards and we sent for oxygen. Resuscitation methods were applied for at least an hour; Mr. McMahon worked on the body immediately and continued until the arrival of Mr. Phillips. We obtained hot water bottles from the railway. To Coroner: There was no signs of life. Archibald James Myors deposed: I am a shop assistant and reside at Molong. I identified the body of Charles Francis Myors on the 6th inst., he was two years of age. He was known to me as a strong boy. I last saw the child alive on the morning of the 5th inst., when I had him out in the car. In returning his verdict, the Coroner expressed deep sympathy with the relatives of the child and showed it in a practical manner by saving the distressed mother from any interrogation. 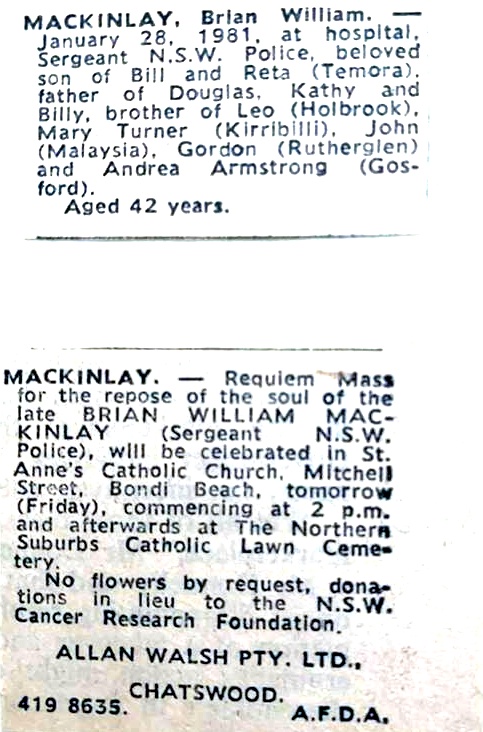 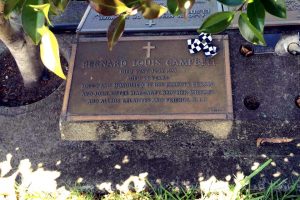 Bernie was apparently being ‘interviewed’ inside Collaroy Police Station and when he was left alone in the room, with a loaded gun in a drawer, Bernie has committed suicide with the use of the Service weapon.