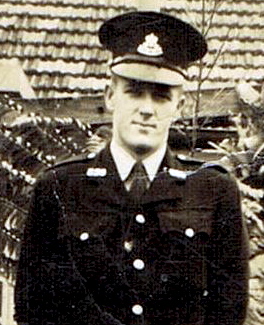 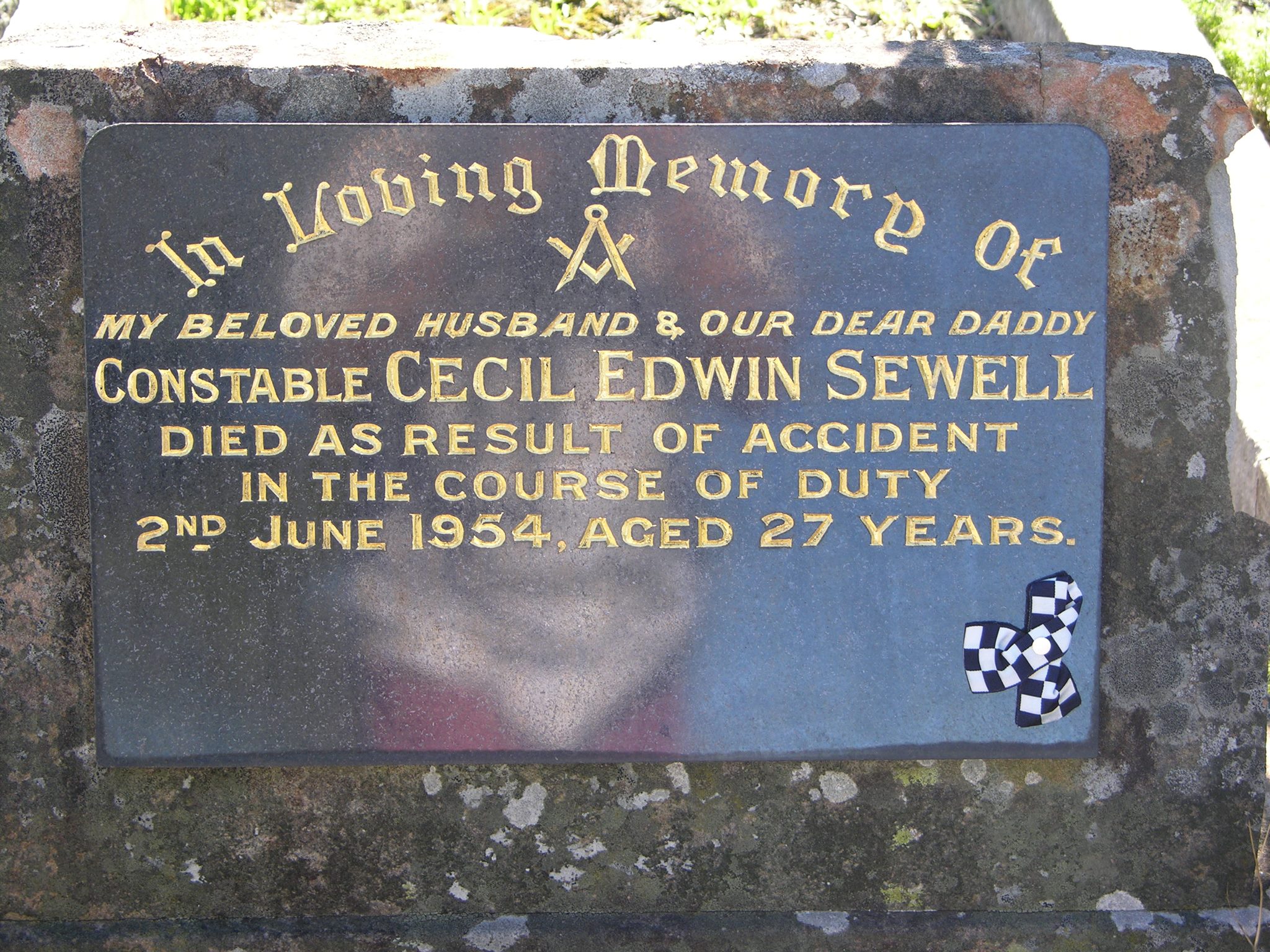 Here are some amazing photos for you,
I have attached some photos of dad in uniform also a few of funeral procession that I found. Dad was also one of the officers who escorted the Queen on her Coronation Tour in Sydney May 1954. I think that might be the photo of him on his bike. After Sydney tour he was to escort the Queen & Duke to Canberra but his bike broke down at Liverpool. A couple of weeks later he lost his life.
Thanks again.
Ron 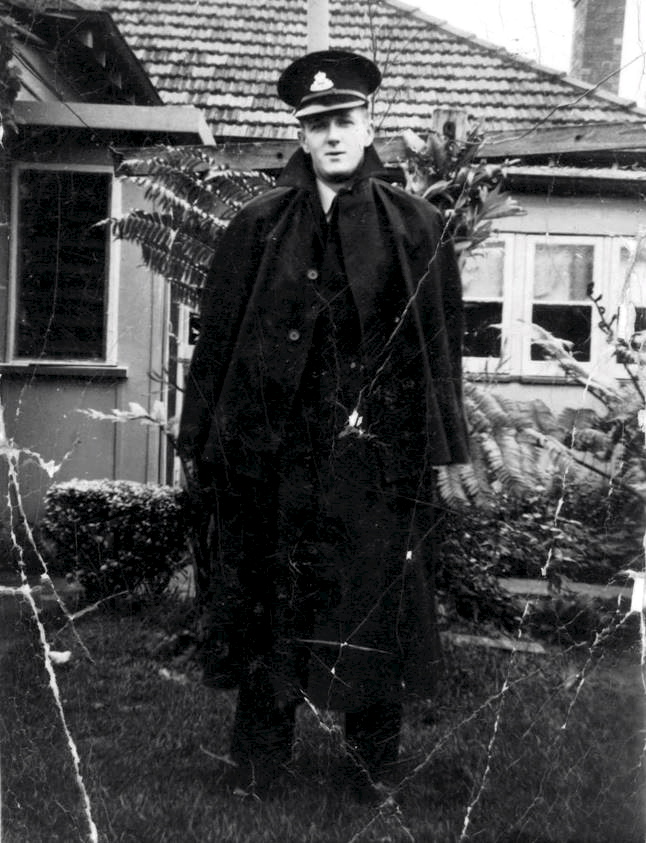 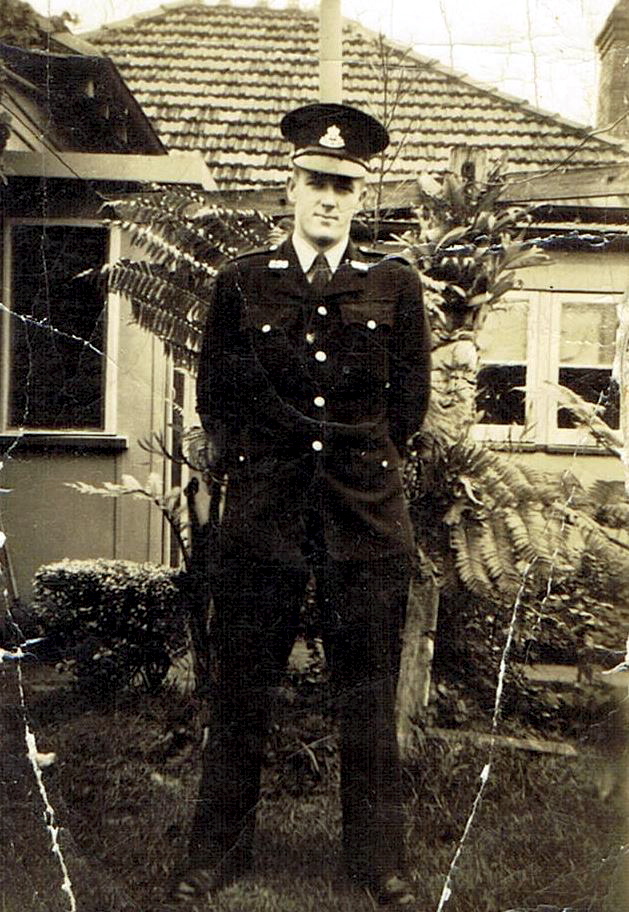 CECIL is mentioned on the Police Wall of Remembrance

( NEED TO OBTAIN PHOTO OF TOUCH PLATE IN CANBERRA )

About 4.45pm the constable became involved in the pursuit of a motor vehicle. As the pursuit neared the intersection of Farnell Street, an elderly man alighted from a bus, ran out onto the roadway and was struck by Constable Sewell’s motor cycle.

Both men sustained severe injuries and were conveyed to the Parramatta District Hospital.

The pedestrian was found to be dead on arrival and Constable Sewell died the following morning.

At the time of his death he was stationed at Parramatta.

The fund for the dependants of the late Constable Cecil Sewell, is now closed.

A donation of £5/5/- In the list published last week, should have been credited to Parramatta Musical Comedy Company.

More than 200 plain-clothes and uniformed police attended the funeral yesterday of Constable Cecil Sewell, 27, of the Public Safety Bureau.

Constable Sewell was fatally injured on Tuesday when his police motor cycle crashed after hitting and killing a pedestrian in Woodville Road, Merrylands.

Constable Sewell was chasing a speeding motor cyclist when he hit the pedestrian – John Thomas Nivens, 60, of Paton Street, Merrylands.

The Police Pipe Band led the funeral procession to Rookwood Cemetery after a service at the Baptist Church, Harrow Road, Auburn.

On 1 June, 1954 Constable Sewell was riding a police solo motor cycle in Woodville Road, Merrylands. About 4.45pm the constable became involved in the pursuit of a motor vehicle. As the pursuit neared the intersection of Farnell Street, an elderly man alighted from a bus, ran out onto the roadway and was struck by Constable Sewell’s motor cycle. Both men sustained severe injuries and were conveyed to the Parramatta District Hospital. The pedestrian was found to be dead on arrival and Constable Sewell died the following morning. The Sydney Morning Herald of 3 June, 1954 printed the following article, and funeral notices.

Constable Cecil Sewell, 27, of the Public Safety Bureau, who knocked down and fatally injured a civilian while chasing a speeding motor cyclist on Tuesday, died yesterday from injuries he received in the accident. He will be buried at Rookwood Cemetery today with full police honours. Constable Sewell was chasing the motor cyclist along Woodville Road, Merrylands, at 70 m.p.h. about 4.45 p.m. when he struck John Thomas Nivens, 60, who had stepped from a bus. Nivens, of Patons Street, Merrylands, died later from his injuries. Constable Sewell, who was thrown from the cycle after it had skidded along the road for 60 yards, died in Parramatta Hospital at 6.30 a.m. yesterday without regaining consciousness. He suffered a fractured skull and internal injuries. Doctors said his condition was too serious to operate. He was married with two children.

Constable Sewell’s funeral will leave for Rookwood after, a service at the Baptist Church, Harrow Road, Auburn, at 1.30 p.m. The Police Pipe Band will lead the cortege, and Public Safety Bureau motor cyclists will escort the funeral. The Superintendent of Traffic, Mr. H. E. Snowden, will represent the Commissioner of Police, Mr. C. J. Delaney. Among other police officers present will be the officer in charge of the Public Safety Bureau, Inspector J. J. Agnew, and the officer in charge of Parramatta Division, Inspector C. S. Jardine. Police are making a wide search for the speeding motor cyclist, whom they blame for the deaths of Nivens and Constable Sewell. A senior police officer said yesterday that the cyclist, if arrested, faced charges of manslaughter.

Mr. Snowden said last night: “Constable Sewell was an outstanding young policeman with a particularly fine character. He was a policeman the public and the Police Force could ill afford to lose. His workmates in the Public Safety Bureau are stunned by his death.” Mr. Snowden said that police would not treat reckless and thoughtless motorists and drunken drivers and speedsters with “kid glove methods”. “We are determined to exert every means at our disposal to make the roads safe for everybody,” he said.

SEWELL – Masonic Lodge Auburn No 404 U G L of N S W, The Officers and Members of the above Lodge are fraternally Invited to attend the Funeral of their late esteemed Brother C E SEWELL. For particulars see family notice. Regalia.”

A police constable who killed a man when chasing a speeding motor cyclist last night, died at 6.30 am today. Police are now making an intensive search for the speedster who caused two deaths.

Dead as a result of the chase are Constable Cecil Sewell, 27, married with two children and John Thomas Nivens, 60, of Paton St., Merrylands.

At 4.45 pm yesterday Constable Sewell was chasing a motor cyclist along Woodville Rd., Merrylands, at about 70 mph ( 180kph ).

His cycle siren was screaming but Nivens stepped out on to the road from behind a bus. The police bike crashed into Nivens, who was killed instantly.

With Nivens draped across the handlebars, the motor cycle skidded for 60 yards before Nivens and Constable Sewell were catapulted from it.

Sewell, of Wycombe Rd., Yagoona, and attached to Parramatta traffic squad, was rushed to hospital. He was admitted with a fractured skull and facial injuries. Sewell was too badly hurt for doctors to operate on him and he died without regaining consciousness.

At present there is no clue as to the identity of the cyclist responsible for the crash.

Constable Sewell was a member of Yagoona Baptist Church. His two children are ; boys — Ron, 5, and Noel, 2.

Mrs. Sewell. 25, was with her parents in Lidcombe during the night.

Constable Sewell’s father, Mr. J. Sewell, of Alice St., Auburn, said today his son had been in the police force for six years.

Traffic Supt. H. Snowden said, “Our drive throughout the State for road safety is going to be enforced with the gloves off. “Reckless motorists and road users who have no regard for the rights of other road users can expect no mercy. “Since police squads have been operating in plain-clothes and ordinary cars, there has been a noticeable decrease in the number of traffic breaches.”