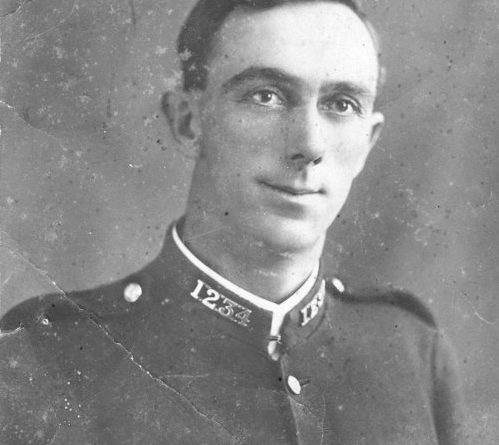 1907 to 1942 it was the ‘Police Depot’ at Bourke St, Redfern or sometimes referred to as Centennial Park. (used by Defence Force during WW2).

Rank:  Commenced Training at Academy on ? ? ?

‘Drunk whilst on duty on the 24 December 1921.  His Appointment ( to Constable ) deferred for a period of 3 months ( this would mean that he would Not be Appointed a Constable on the 9 May 1922 and would have to wait until at least 9 August 1922 to be Appointed but he was Discharged 3 weeks before that date’

Returned to Australia via ‘Karmala ‘ SW ( Shrapnel Wound ) to Right arm, from England, on 2 January 1919. 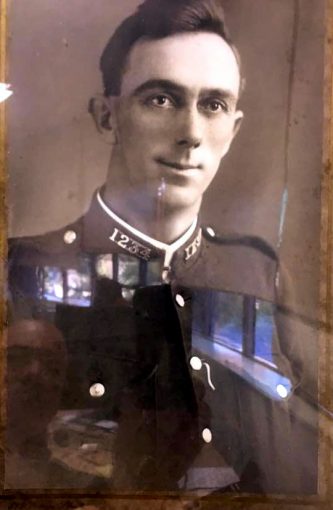 On his NSWPF Service Card, the following details are recorded:

His previous employment was a Tramway Conductor with NSW Trams.

He was a Baptist.

He was ‘Discharged’ from the employ of NSWPF on the 21 July 1922 not having his Appointment of ‘Constable’ confirmed.

Record of Offences and Special Services:

‘Severely reprimanded and Cautioned and his appointment deferred for a period of 3 months’  Noted 29.12.1921

Charles David HILAIRE #600 ( A.I.F. ) was wounded in action in France on 25/5/1918, Gun Shot Wound, right arm, severe.
After treatment in France he arrived at the London War Hospital on 2/6/1918.
He arrived back in Australia on 22/2/1919 and was discharged on 29/6/1919.
If all went to plan he should have received the 1914/15 Star, the British War Medal and the Victory Medal.
On his war service his address was given as Sinone Ave, Sandringham, A.K.A. Dolls Point.
Sinone Ave leads down to the Georges River 16ft Sailing Club.
On 8/10/1941 he was acquitted of the manslaughter of the bicycle rider Hawkins.
Just as a matter of interest a George H. Hilaire of Punchbowl, ( not that far from Dolls Point ) WW1 Service # 2516 also signed up. He was wounded ( gassed ) and returned home.
Was he a brother of Charles?
Finally, Charles was a Probationary Constable on 9/5/1921 # 1118.

APPLICATION FOR LEASE FOR OYSTER CULTURE

it is hereby notified, for general Information, that the undermentioned person has applied to lease for oyster culture the portion of land described below. A tracing, showing the position of the portion, may be inspected at this Department ( Fisheries Branch ) from Monday to Friday, between 11 and 3 o’clock, and on Saturdays between 11 and 12 o’clock. Any person may, by memorial to the Chief Secretary, within thirty days from the date of this notice, and on grounds to be stated in such memorial, pray that a lease of the portion may not be granted. All objections on account of interference with alleged hauling grounds must be accompanied by a statutory declaration by one or more of the licensed fishermen so objecting, that they have personally known bona fide hauls to have been made over the area during the preceding twelve months. They must also be prepared to make a test haul with their own nets when requested to do so.

Charles David Hilaire, of Willington Street, Arncliffe, was committed for trial in the Coroner’s Court yesterday on a charge of having feloniously slain Stanley Kevin Hawkins at Brighton-le-Sands on June 21. Hilaire was the driver of a car which collided with Hawkins’s bicycle.

Three occupants of a car stated in the Coroner’s Court on Monday that they had driven on after the car had hit a youth on a bicycle in General Holmes Road, Brighton-le-Sands, on June 21.

The City Coroner, Mr. Oram, found that the youth, Stanley Kevin Mawkins, formerly of Fleet Street, Carlton, had died as a result of injuries received in the collision and that the car driver, Charles David Hilaire, of Willington Street, Arncliffe, had feloniously slain Hawkins.

The Coroner committed Hilaire for trial, and allowed bail in £80. ”

Evidence has shown that the bicycle was dragged fully 60 yards from where the body lay on the roadway, ” Mr. Oram said: ” The fact that Hilaire did not stop is consistent with him having a number of drinks before the accident. ” Hilaire, in a statement, said that just after the accident one of the passengers had told him to go back. He went to turn back, but said: ” No, we will go on. I don’t think it, is serious. ”

He seemed to lose his nerve and was afraid to return to the scene of the accident.

Frank Joseph Butler, and Richard Leslie Bell, friends of Hilaire‘s, both said in evidence that they had had about seven drinks each before the accident.

They and Hilaire were sober when the accident occurred. Hilaire had appeared dazed after the accident. The three men had reported to the police the following morning.

” It seems a shocking thing that three young men should drive away, after a car had collided with a cyclist, without inquiring as to the condition of the victim of the collision. In this case the boy’s body was found 60 yards away from his bicycle. ”

The City Coroner ( Mr. E. T. Oram ) made this remark after inquiring into the death of Stanley Kevin Hawkins, 18, a G.P.O., mechanic, of Fleet street, Grafton, who was killed in General Holmes Drive, Brighton, on June 21.

Charles David Hilaire, laborer, of Willington Street, Arncliffe, was committed for trial by the Coroner on a charge of manslaughter.

James Morris Dew, 17, apprentice, of President Avenue, Kogarah, said in company with Hawkins he was riding his bicycle along General Holmes Drive on June 21 when something hit him on the shoulder. ” I looked up and saw a car going round a bend travelling very fast. I saw Hawkins’ bike come out from under it but the car did not stop, ” said Dew. ” I went over and saw Stan lying on his back. I called him by name, but he did not reply. ”

In an alleged statement to the police, Hilaire said that he was driving along the road with two friends, Dick Bell and Frank Butler, when he noticed the cyclists immediately in front of him as he rounded a bend.

One rider was on the right side of the roadway and the other on the left. He couldn’t go around them, but he could see there was room to go between.

Just after the accident, one of the passengers said, ” Go back, ” the alleged statement went on. ” I went to turn the car at Bestic Street to go back and then I said, ” No, we’ll go on, I don’t think it is serious. ”

” I can’t explain my feelings after the accident happened; I seemed to lose my nerve and was afraid to return to the scene of the accident, ” the alleged statement proceeded. ” I had hardly any sleep that night. I was too worried. The next morning I did not get a paper, but Frank Butler and Dick Bell came to my place and one of them told me that the chap I had hit was killed. ”

Richard Leslie Bell, laborer, Maunder Street, Regent’s Park, and Francis Joseph Butler, laborer, Clarence Street, Bankstown, passengers in the car, stated that they called upon…….. He seemed to be slumped over the Wheel in a daze.

Constable Douglas Lechlightner, of the Safety Bureau, said that when he inspected the scene of the accident he found the dead lad lying about 60 yards from his bicycle and approximately midway between two electric light poles.

Charles David Hilaire, 47, labourer, was acquitted at the Quarter Sessions ( Darlinghurst – Court 2 )  of a charge of the manslaughter of Stanley Kevin Hawkins, l8, who was riding a bicycle at Brighton-le Sands on June 21, 1941, when a car driven by Hilaire collided with it.

Charles David Hilaire, 47, labourer, was acquitted at the Quarter Sessions of a charge of the manslaughter of Stanley Kevin Hawkins, aged 18 years, of Fleet Street, Carlton, who was riding a bicycle at Brighton-le-Sands on June 21, 1941, when a car driven by Hilaire collided with it.

Did Not Stop After Accident.

For failing to stop his car and give assistance after an accident in General Holmes Drive, Brighton-le-Sands, on June 21. Charles David Hilaire, 47, labourer, Willington Street, Arncliffe, was fined £10 by Mr. Atkinson, S.M.. at Kogarah Court last Thursday.

On a charge of driving a car negligently he was fined £2. Constable Scott said Hilaire attempted to drive between two approaching cyclists, one of whom was struck by the car and killed. Hilaire failed to stop, but gave himself up next day.