by the issue of the 1969 Stud Book, Cliff had already passed his qualifying examination for Sgt 1/c 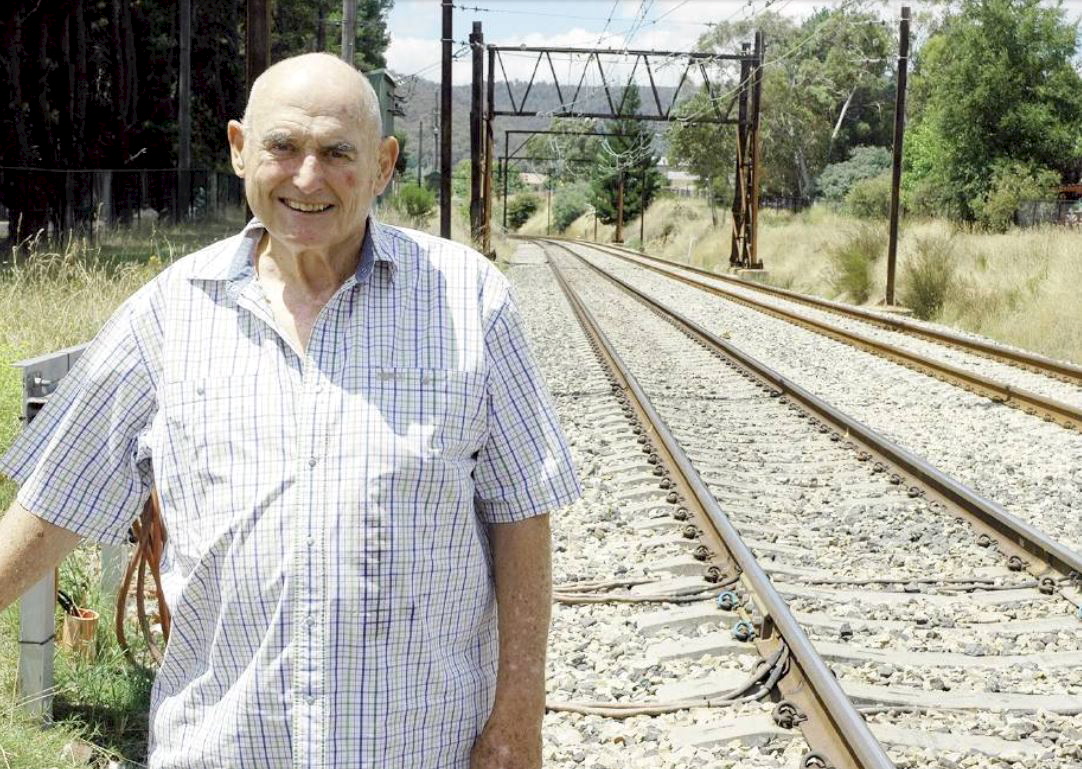 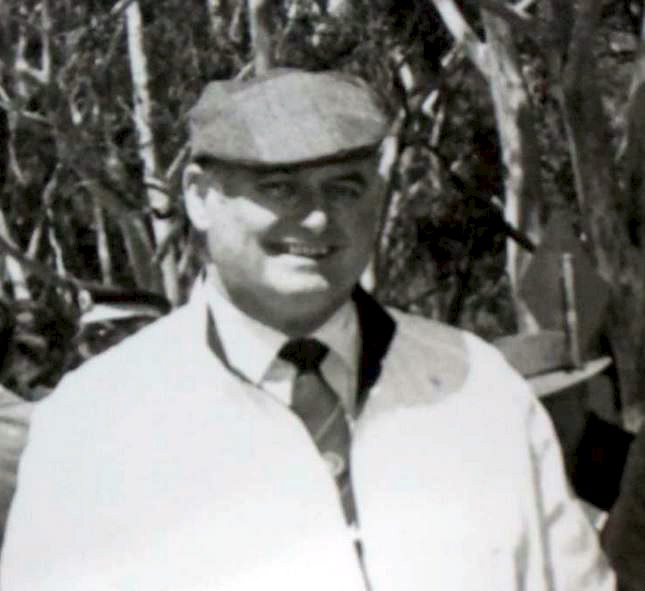 THE death has occurred at the weekend of former prominent Lithgow sports broadcaster and police officer, Cl​iff McHardy.

Mr McHardy, always a larger than life personality, was Detective Sergeant in charge of criminal investigations in Lithgow through to the mid 1970s.

He was transferred on promotion to Penrith where he retired with the rank of Detective Chief Superintendent. His retirement home was at Glenbrook but he kept in regular contact with Lithgow. Mr McHardy conducted the live broadcasts of Group 10 rugby league for Radio 2LT which were a popular feature of weekend sport at that time.

Mr McHardy told the Lithgow Mercury that one of his biggest disappointments in unsolved crime was the bizarre incident in 1970 when an attempt was made to derail the royal train during a night time passage through Lithgow with the Queen and Prince Phillip en route to Orange.

A log was placed across the tracks in a cutting at Bowenfels but was dislodged by a ‘sweeper’.  The incident was officially hushed up but 30 years later made international headlines when revealed in the Mercury following an interview with the retired detective.

The disclosure even resulted in Mr McHardy being contacted by a Hollywood producer interested in making a movie about the drama.

Mr McHardy, who was in his 90th year, is survived by wife Colleen, daughters Ann Marie and Karen and son Peter and their children. 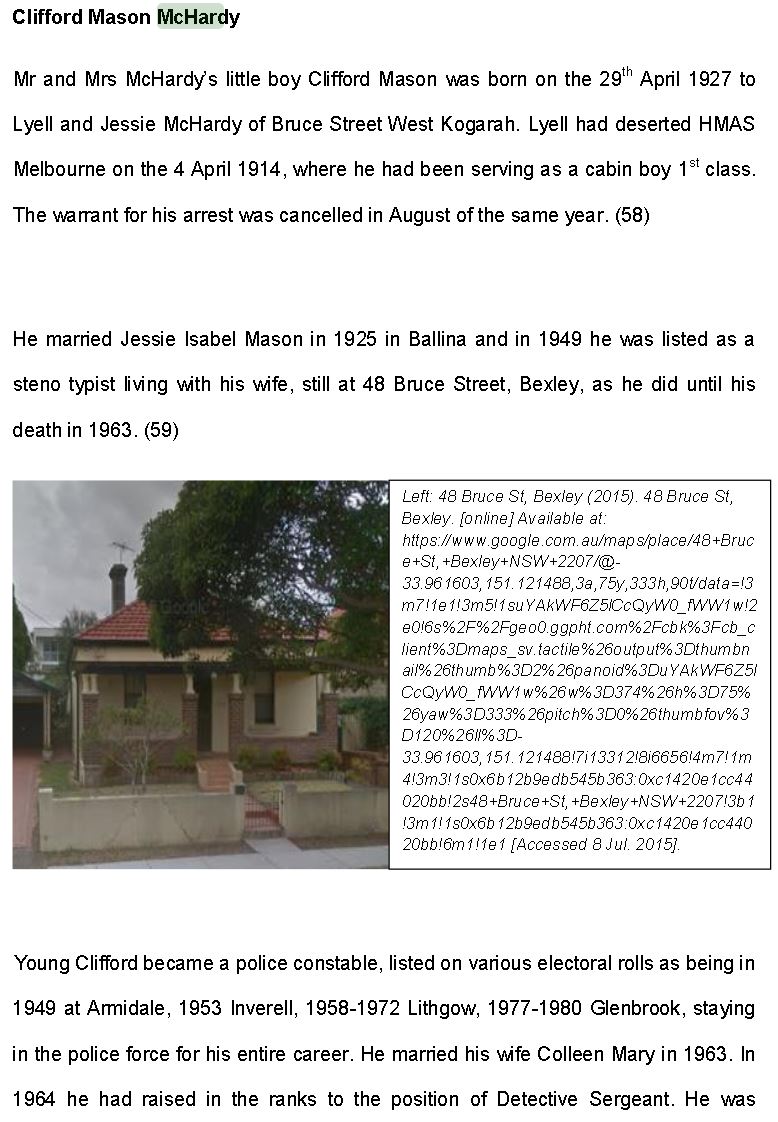 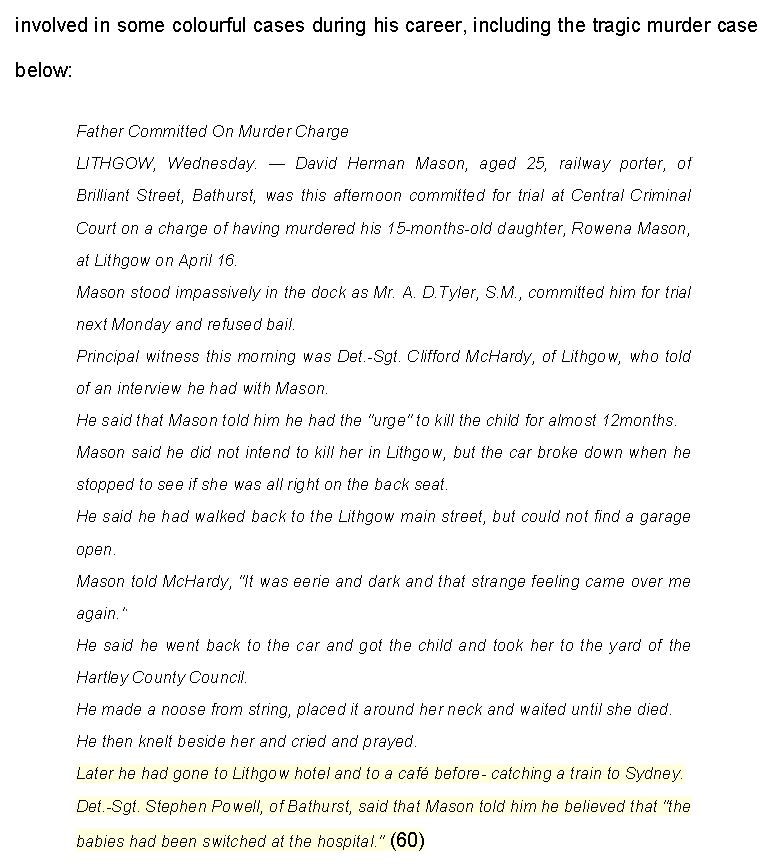 An Inverell man — described by police as ‘an absolute nuisance‘ — who was said to have assaulted Inverell Jockey Club secretary, Jack Marquart, with a stock whip, was sent to gaol for two months by two Js.P. at Inverell Court to-day.

He was William David Gordon Munsie, aged 50, of no fixed abode. Munsie pleaded ‘not guilty’ to having unlawfully assaulted John Ambrose Marquart at Inverell racecourse on December 30, 1952.

Constable Clifford Mason McHardy said about 3:20 p.m. on December 30, following a telephone call to Inverell police station, he went to the stable at the rear of Inverell racecourse, where he was told something. ”

I saw the defendant riding a horse alone a track running at the rear of the course. ” When I first saw him he would have been about 300 yards from me. ” I started to follow him in the police truck along the roadway, and at the time the defendant was walking the horse. ” He appeared to look round and broke his horse into a full gallop.”

Const. McHardy said he pursued the defendant for about two miles through the paddock and all the time the defendant kept the horse at a full gallop.

” I arrested the defendant at his camp on December 31, and when I told him it was alleged he had assaulted Jack Marquart with a whip and had tried to run him down with his horse at the back of the racecourse, Munsie said: ” I was trying to make him let go of my bridle “. Const. McHardy said Munsie was then taken to Inverell police station and charged. The whip had been recovered at the racecourse at the time of the incident.

He said he had spoken to Marquart at the course and he had a number of marks down his back. Answering the defendant, Const. McHardy said Munsie went for two miles from the time he followed him to the time he lost him.

John Ambrose Marquart, clerk, of 85 Vivian Street, Inverell, said on December 30 last he was at the Inverell racecourse. He said Munsie went to the racecourse about 3 or 3.15 p.m. ” The first salute I got from Munsie was when he rode up to the loading ramp where the horses unload, and said: ‘Good day, Marquart.’ ” ” I said: ‘Good day. Chappie’. ” He rode away to some men at the new stable doors, and the next thing I knew was that Munsie was bellowing abuse and very bad language. ” I walked over towards him and said “Get away out of the road as quick as you can.’ ” He turned towards me with the horse he was on and charged straight for me. ” He appeared to be in a very drunken state and all you could hear was very bad language coming out of his mouth.” said Marquart. ” When he charged me I stepped aside and took hold of the horse by a check rein he was using on the horse. ” I held the horse by the rein, and then Munsie got into me with a double whip. ” He tried to flog me with the whip from the horse. ” He struck me with the whip. ” The marks on my body show he struck me at least three times. He hit me on the left shoulder,” Marquart said. ” I took the whip off him during the struggle. ( The whip was produced in Court ).

Marquart said he was wearing only a shirt and took the full force of the blows. ” After the first blow, I said to him: ‘For God’s sake. Chappie, go away. If you don’t I’ll have to send for the police’. ” I got my son to inform the police.” Marquart said the defendant was not employed at the racecourse on that day. He had no authority to be in the enclosure. ” I gave him no provocation to charge me and try to run me down.”

He said he walked towards the gate to try to entice Munsie away. ” I was walking about 10 paces away when he came for me a second time. ” I heard someone say: ‘Look out. Jack.’ I stepped aside and Munsie went past me. ” It was the second time he tried to run me down. ” He saw the police coming and took to the hills.” Marquart said he had possession of the whip when Munsie charged him a second time.

Messrs B. A. Wood and J. Carmody, Js.P., were on the Bench. Sgt. J. McD. Dwyer prosecuted. Sgt. Dwyer said Munsie had a long record including a conviction for assault on December 15, 1947. for which he received one month’s hard labor, and another conviction for assault on June 24, 1949, when he received 14 days. ” He’s an absolute nuisance,” Sgt. Dwyer said. ” He’s only just been discharged from gaol. He’s no sooner out than he’s in again.”

Convicting Munsie, the chairman of the Bench. Mr. Wood, said: ” This sort of thing will not be tolerated. You have a very bad record. You will go to gaol for two months.”