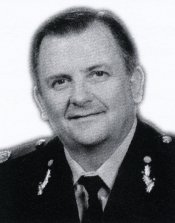 Commissioner Ken Moroney joined the NSW Police Force in 1965. Since then, period he has been stationed in both metropolitan and rural police stations in NSW where he has gained a variety of experiences in both generalist and specialist positions.

His experience to date includes general police duties, traffic and investigative studies, administrative duties and more lately, Senior Operational Command. In 1987, Mr Moroney was appointed as the inaugural Director of the Police Recruit Education Program at the Police Academy, Goulburn with the rank of Superintendent. He held this position until October 1990, he was appointed Chief of Staff to Commissioner Mr John Avery. He remained on these duties following the appointment of Commissioner Tony Lauer in March, 1991.

In 1992, the Commissioner was awarded the Australian Police Medal for distinguished service.

Mr Moroney was appointed to the position of Executive Director, Education and Training in June, 1993. As such, he was responsible to the Commissioner and Police Board for the education and training of 13,000 police officers and 3,500 public servant support officers. The nature of this training extended from recruit to command level and to generalist and specialist areas of the Force.

In March, 1997, Mr Moroney was appointed by then Commissioner Ryan as Commander, City East Region with Headquarters at the Sydney Police Centre. His responsibilities included the Sydney Central Business District, Eastern and Southern Suburbs and Sydney and Botany Harbours.

In 1997, the then Assistant Commissioner Moroney was highly commended by the NSW Cabinet for his role in the Rescue Co-Ordination effort at the scene of the Thredbo disaster.

In 1992, the Deputy Commissioner was highly commended by the Commissioner of Police as the Commander of an operation mounted to negotiate the release of several hostages held at gunpoint and during a prolonged siege at Liverpool. The hostages had been held at a Department of Community Services office by two persons threatening suicide by use of an explosive device.

Between 1977 and 1987, Deputy Commissioner Moroney was an executive member of the New South Wales Police Association and prior to his appointment to Commissioned Officer rank, was the Deputy President of that Association. In recognition of his service to the Association, he was granted life membership in 1987.

Mr Moroney is married with three sons, two of whom are members of the New South Wales Police Force.

Back to Management Index