Techniques For Fingerprint Detection
And Enhancement

INTRODUCTION
The latent fingermark is visible and hence, for its exploitation, it must be given characteristics which differentiate it from the surface on which it is found. Traditionally, this differentiation is obtained in the form of a coloured material, applied to the print by either a physical or chemical process. In order for a latent fingermark to be detected, a contrast must be produced between the print and its support that exceeds a certain threshold corresponding to the sensitivity of the eye or the photosensitive detector utilised. The minimum amount of latent residue required to observe a coloured print by chemical processing is approximately 100 to 200 ng (1 ng = 1 nanogram = 0.000000001 g ), while 500 to 1000 ng is necessary for the satisfactory adherence of a powder. When the quantity of residue in the fingerprint deposit is below such levels, the developed print is normally weak and/or partial, and may be unsuitable for identification purposes regardless of the colorimetric technique employed and the precautions taken to optimise development.

Among the range of techniques based on an interaction between light and matter, those which are followed by an emission of electromagnetic radiation (in the present case, light) permit a detection sensitivity considerably superior to that obtained by absorption techniques (10 to 100 times higher – i.e., a valid result can be obtained with 10 to 100 times less sample). Photoluminescence is such a technique. It has allowed a sensitivity in fingerprint detection that was not possible 20 years ago. Photoluminescence is the emission of light by certain chemical species after exposure to a flux of light energy of a given wavelength, known as the excitation wavelength. Photoluminescence techniques can sometimes detect latent prints directly, but are generally more successful when used in conjunction with specific chemical processes as detailed later.

The combination of optical methods, (diffusion, luminescence, UV absorption and reflection), physical methods (powdering, small particle reagent, vacuum metal deposition), physico-chemical methods (physical developer, multimetal deposition, iodine, cyanoacrylate) and chemical methods (ninhydrin and its analogues, metal complexation after ninhydrin treatment, DFO, silver nitrate, etc…), permits a rational and highly efficient processing of the secretions deposited by the fingers on various surfaces. It is the treatment of these natural secretions, exposed to the assault of time and the environment, that permits the detection and development of latent fingerprints.

The first step in fingerprint detection at a crime scene is to examine all surfaces and objects and photograph or collect all visible fingermarks. Some laboratories suggest the use of laser or other high-intensity light source in the search for luminescent fingerprints. Then arises the choice of development techniques for the detection of latent fingermarks – the choice is not always easy given the wide range of procedures currently available. The most efficient approach is to allow for a sequence of techniques which complement one another but are not mutually exclusive. To the extent that is possible, all objects or pieces of evidence that can be taken from the scene should be removed, with all the normal precautions, for optimum fingerprint treatment in the laboratory. On non-transportable objects having smooth, non-absorbent surfaces, the traditional development technique is powdering.

For a given set of circumstances, the choice of the best detection techniques, or sequence of techniques, would depend on several factors that would include the following:

One notion that is often ignored or misunderstood is that, depending on the history of the evidential object, it may be useless to proceed with certain examinations. For example, it is futile applying a technique which relies on the detection of eccrine secretions eg, amino acid detection using ninhydrin, if the object has been wet since this component of the deposit is water-soluble and would no longer be present!
If the correct choice of technique, or sequence of techniques is made at the start, the chance of revealing any latent print that may be present on an object is optimised. On the other hand, the application of the wrong technique can ruin any possibility of fingerprint detection.

FORENSIC LIGHT SOURCES
The efficient optical detection of both latent fingermarks and prints treated by physical or chemical processes is dependent on the availability of a suitable high intensity light source capable of operating at a range of different wavelengths. A Forensic Light Source (FLS) is defined as a high intensity light source that has been specifically designed for forensic applications that may include crime scene examination, fingerprint detection, and questioned document analysis.

To obtain the best contrast from a luminescent fingerprint, it is important that the incident light (excitation) is at the wavelength of maximum absorption, and the luminescence observation is in the spectral region of maximum emission. The required wavelength for the incident light (the excitation) may be obtained by filtering a broad band light source or by using a light source which is monochromatic at that wavelength, i.e., a laser.

Observation should be made at the wavelength of maximum photoluminescence emission. This emission, which occurs at a longer wavelength than the excitation light i.e., lower energy, is observed through a filter which transmits all, or the majority, of the light emitted, but blocks or absorbs, the incident light and/or other undesirable radiation. In this manner, a bright luminescence against a dark background can be observed, giving the maximum possible contrast between the luminescent mark and the support. 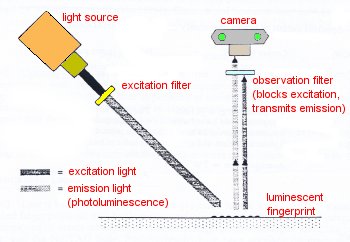 LASERS
The word laser is an acronym derived from “light amplification by stimulated emission of radiation”. The main physical differences between laser light and light produced by other light sources is that the former is monochromatic, i.e., single wavelength, coherent and very intense. The coherence of light is a property which is not, at present, employed for the detection of fingerprints. In contrast, the high intensity is necessary when the excited compound exhibits a low quantum yield.

Monochromatic light, as supplied by a laser, is only an advantage if its wavelength corresponds to, or approximates, the maximum absorption of the compound under investigation. However, each type of laser only operates at a limited number of wavelengths. The selection of laser “lines” (specific monochromatic laser emissions) is often such that their wavelength is far from being optimum for the excitation process. A 50 per cent loss of efficiency is not uncommon and it is only the power of the laser that can compensate for this limitation in the selection of an excitation wavelength. This high power can, however, introduce other problems such as evidence destruction (holes burnt into dark surfaces, for example). Lasers therefore suffer from a lack of flexibility which, combined with their relatively high cost, has led to the development of a number of “alternative” light sources based on high intensity globes or arc lamps.

There are several classes of laser used in fingerprint detection work. The argon ion laser is the most versatile laser and it can be operated in two main modes: the “all lines lasing” mode which produces a beam of light having light of different wavelengths, or alternatively the laser can be adjusted to produce individual lines of light, i.e., monochromatic.

NON-LASER LIGHT SOURCES
A light source for fingerprint work should be capable of giving a narrow band of intense light at any wavelength from and including the UV through to at least 550nm. If the light source is to be used for other applications such as document examination, infrared light from around 700nm is an additional advantage. No one laser can satisfy all of these requirements and few laboratories can afford the purchase of several different lasers. For some applications, such as the search for visible fingerprints or for the detection of footwear marks on smooth surfaces, strong white light is also a useful tool. This can never be obtained from a laser. As a result, a number of non-laser light sources, or “alternative” light sources (ALS) have been developed specifically for fingerprint applications.

The versatility and relatively low cost of a conventional light source compared to the laser has lead many laboratories to prefer the former for fingerprint work. For example, the use of a modified and filtered xenon arc lamp can give results comparable with those obtained with a laser for a range of techniques. Better results can be obtained with a filtered lamp if the required excitation wavelength does not correspond to one of the available laser lines. Another advantage, associated with the use of interference filters, is the possibility of adjusting the bandpass (region of transmission) by varying the angle of the filter in the light beam, i.e., varying the angle of incidence – this “fine tuning” of the excitation, or observation, can be used to optimise the signal-to-noise ratio. The use of this phenomenon can give remarkable results in the detection of luminescent fingerprints on printed or multicoloured surfaces. The PolilightÂ®, a forensic light source produced in Australia, is the only commercial system offering this fine tuning capability