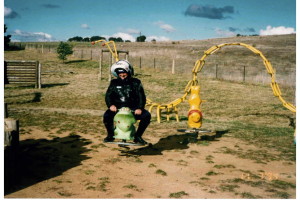 At 2.30pm on 15 August, 1994 Senior Constable Tidyman, a senior motor cycle instructor, was riding at the rear of a column of trainee police cyclists. While travelling along the Lachlan Valley Way, Boorowa he was struck by an oncoming vehicle and fatally injured. The offending driver had apparently lost control of the vehicle before veering across the roadway and colliding with Senior Constable Tidyman’s cycle.