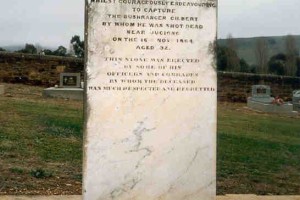 On 16 November, 1864 Sergeant Parry, Sub Inspector O’Neill and Constable Roche formed the mounted police escort for the Gundagai mail coach on its journey to Yass. Roche was seated beside the coach driver, Gundagai Police Magistrate Mr Rose was inside the coach and Parry and O’Neill followed on horseback. Shortly before 3pm as the coach approached the township of Jugiong, the escort was attacked by bushrangers Hall, Dunn and Gilbert. Sub Inspector O’Neill closed with Dunn and Hall and when he had emptied his rifle he hurled the weapon at Hall, striking him on the head. He then drew his revolver and fired at Dunn. Meanwhile, Parry and Gilbert fired on each other, with the bushranger calling on the sergeant to surrender. Parry continued to fight until he was fatally shot in the head.

The Australian News for Home Readers dated 19 December, 1864 carried the results of an inquest into the sergeant’s violent death, informing its readers that “An inquest was held before Mr Rose, at Jugiong, on the body of the brave sergeant of police, when the jury returned the following verdict: ‘That on the 16th day of November, in the year of our Lord 1864, at a spot about four miles to the south of Jugiong, in the colony of New South Wales, the deceased Edmund Parry did die from the effects of a gunshot wound, at that time and in that place wickedly, maliciously, and feloniously inflicted upon him by one John Gilbert, and that two other certain persons, named Benjamin Hall and John Dunn, were then and there unlawfully aiding and abetting the said John Gilbert in so feloniously destroying the life of the said Edmund Parry.”

The murderer Gilbert and accomplice Hall would later be shot dead by police in separate incidents, while Dunn (who would murder Constable Samuel Nelson at Collector less than two months after this incident) was destined to be hanged for his crimes.

The sergeant was born in 1832 and joined