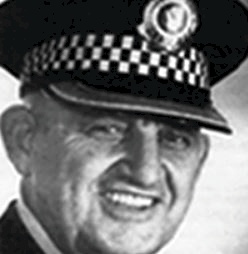 Edward (Ted) Cahill served the Police Association as Maitland Branch secretary, conference delegate and Executive member 1952–c1970.
As an associate member he represented retired police in the Newcastle Branch from 1979–1988.
Ted was attested on 3 July 1939. In 1948 he was appointed a police prosecutor and, in 1952, became the district police prosecutor for the Hunter region. Ted was a fine all-round athlete and, in retirement, a keen lawn bowler. He retired on 10 May 1975 with the rank of inspector 2nd class and died on 13 January 2011.
https://pansw.org.au/about/life-members/life-member-biographies/cahill-edward-vincent-1915-2011
[divider_dotted]

Sergeant E. V. Cahill, a member of the prosecuting staff from the C.I.B., began duty in the Maitland district this week as police prosecutor. His territory includes the Coalfields and extends as far as Scone. Sergeant G. King, who has been appearing as prosecutor, made his last appearance at East Maitland Court on Friday last. He is returning to general duty. Sergeant King appeared as police prosecutor at a recent Scone coronial inquiry.

Warning On Speed At Crossings

Sergeant Cahill said this action had been taken because there had been four fatal accidents in 12 months at the level crossing on the New England Highway at Four Mile Creek each attributable to speed.

More than 70 motorists had been reported for speeding at the crossing since the regulation appeared. ” Unless the position at the crossing improves, I will ask the Court for heavier penalties. ” he said. ” The limit was not introduced to persecute people, but to protect them, and police have been instructed to tighten up supervision of the crossing. ”

Three people charged with having driven at speeds in excess of that provided each stated he was unaware of the 15 mile-an-hour limit. Kenneth Clarke, of Jackson-street, Balgowlah, and Howard Vincent Maughan, of White-street, Gosford, were each fined £2/8/, with 12/ costs. The charge against William Jenkins, of Spencer-street, Cessnock, was dismissed under Section 556A after Mr. W. A. Enright ( for Jenkins ) had said he had been driving for 40 years without a conviction.

Blood Tests For Drivers Urged Blood tests for drivers charged with driving under the influence were advocated by Sergeant E. V. Cahill, of Maitland, guest speaker at Kurri Kurri Business Men’s Club dinner. He said these tests would be the best for all parties. They would show the amount of alcohol consumed and would prove the capabilities of a driver. This would help the driver and the Court in determining these cases, he added. A vote of thanks was given by Mr. P. Johnson, supported by the President (Mr. R. Dick).

Scott Ellis:   Ted was my Grandfather on my mum’s side. Some of the question marks in red:

He was a Prosecutor at Maitland before making Inspector and was then OIC at Cessnock. Later moved to OIC Gosford where he retired from.

He featured prominently in a couple of big stories around Maitland, firstly the 1955 flood disaster, and a double decapitation murder of a couple, The Shelley’s, which was the subject of a book.
He prosecuted the offender and the investigation was run by his brother, Pat Cahill who was a Det Sgt at Newcastle CIB. They were nicknamed the “brothers in law”.

The solving of the murder pretty much turned on ballistic evidence presented by then expert Barney Ross, after a series of coincidences turned up one of the heads in Newcastle Harbour and a bullet was recovered. Fascinating brief! ( see part of the story below – Cal )

They were interesting blokes and part of our families history of NSW Police Service which includes Ted, Pat ( P.J. Cahill ), my dad Ike, Ted’s nephew Wal Taylor, also a prosecutor and myself.

I will see how many more of the red question marks I can get answered by the family mate and come back to you. Thanks for posting this.

Police investigating the ” headless bodies ” murder to-night issued an urgent appeal for help from any motorist who gave a lift to a man carrying a suitcase or sack in Maitland district on Saturday night.

Police think that a psycopathic (sic) killer, who axed the heads off an East Maitland man and his wife in their lonely placed home on Saturday morning, fled from the district carrying the heads and murder weapon with him.

The dead couple, in the most horrifying murder in the annals of N.S.W. crime, were Sydney Sylvester Shelley, 34, and Elva Shelley, 21.

Their baby, eight-month old Louise, was found alive, but suffering from concussion, buried under two blankets and a suitcase in her cot.

Police have a theory that the mother, seeing her husband being murdered, hurriedly hid the baby under the blankets and suitcase to save the baby’s life.

The detectives believe that the killer first shot Mr Shelley and then beheaded him on the front doorstep of the tiny home. They think he then killed Mrs. Shelley.

More than 150 police have been swung into the search for the killer.

Police are making a house to-house check of Maitland, Newcastle and areas further out. They have ” turned over ” all known criminals.

Det. Sgt. R. E. Lendrum ( Regd # 3919 )said, ” Police have spent today scouring the country near the scene of the murder looking for the heads of the murdered couple and the murder weapons.

A coroner’s report to-day disclosed that the Shelleys could not have been murdered before 5 o’clock yesterday morning. .

Maitland police also said that there was now clear evidence that the Shelleys had been shot first and then decapitated.

The Shelleys‘ baby is now in hospital and its condition is satisfactory.

Police have been told that a man visited, the Shelley home late on Friday afternoon and there was an argument. The visitor left.

Police are checking the possibility that the visitor returned later that night, after the Shelleys had retired, and knocked on the front door.

Police said at an inquest today that a man charged with the murder of a married couple at East Maitland had tried to put the blame on another man when they accused him of the crime.

The coroner was inquiring into the deaths of Sidney Sylvester Shelley, 34, and his wife, Elva Shelley, 21, whose beheaded bodies were found in their house on April 23.

Sergeant Cahill said he arranged for O’Connor to confront Russell and repeat his allegation.

O’Connor had said to Russell, according to Sgt. Cahill: ” I think you shot them and cut off their heads.”

Russell had replied, ” You are a liar. Now I know that you done it.”

Sgt. Cahill said O’Connor had admitted to police that he had received from Russell a .32 calibre Colt revolver which Russell had borrowed from Shelley on Easter Monday.

When asked what he had done with the gun, O’Connor said that he had thrown it into the sea off Nobby’s Lighthouse, Sergeant Cahill said.

O’Connor had denied that he had shot the Shelleys with the gun, even after police had told him that bullets fired from the gun for practice into a post in the Shelley‘s back yard matched the bullets taken from Mrs. Shelley‘s head when the head was found.

Det. Sgt Cahill said that when police asked O’Connor why he and Russell wanted the gun from Shelley, O’Connor had replied, ” We only borrowed it. We heard he had one and we wanted to do a job.”

A detective sergeant said in the Maitland Coroner’s Court to-day that he told a man accused of a double murder that two bullets dug from a post in the yard of a house at East Maitland showed identical firing markings to two bullets taken from the decapitated head of a woman which was found floating in Newcastle Harbour.

Det. Sgt. Jack Bateman, of the Sydney C.I.B., said this when giving evidence in an inquest into the deaths of Sidney Sylvester Shelley, 34, and his wife Elva, 21. Their bodies were found, decapitated, in their East Maitland home on April 23.

Before the court was Terence Patrick O’Connor, 32 married, of Maitland. O’Connor is in custody on charges of murdering the Shelleys.

At the sixth day of the inquest to-day Sgt. Bateman said he put it to O’Connor that police, by comparing the bullets from the post at the Shelley home with the bullets taken from Mrs. Shelley’s head, had established that Shelley and his wife had been killed by a pistol which Shelley had owned.

Sgt. Bateman said he further told O’Connor that police had established that a man named Jack Russell had borrowed the pistol from Shelley and had given it to O’Connor.

O’Connor had replied, ” Yes, he gave it to me, but how do you know it is the one that killed her “? Sgt Bateman said.

The hearing was adjourned to to-morrow. To-morrow all evidence is expected to be completed and the Coroner, Mr. Jenkins, is expected to record a finding.

Mr. Jenkins committed O’Connor for trial ” I am satisfied beyond any ( reasonable doubt ) that in each instance the killing was done by O’Connor, ” Mr. Jenkins told the court

Mr. Jenkins also found that Elva Shelley died from bullet wounds in the head. Sidney Silvester Shelley had died from some injury inflicted on the head.

The beheaded bodies of the couple were found in their East Maitland home. Mr Jenkins said the head of Elva Shelley had been identified to his complete satisfaction.

” I can find no evidence which implicates either John Vile Russell, or Alan Dawson, ” he said. ( Two counsel earlier said ” two other men ” could be said to have motive for the killings. )

The accused, Terrence Patrick O’Connor, was sentenced to penal servitude for life.

The jury found O’Connor guilty of having murdered Sidney and Elva Shelley at their home at East Maitland on or about April 23.

After the jury delivered its verdict, Mr. Justice Brereton asked O’Connor if he had anything to say.

O’Connor who appeared distressed, said, ” There is nothing I can say Your Honour.”

The judge then delivered his sentence and O’Connor was taken to the cells below the courtroom.

Mr. Justice Brereton said that there was nothing in the case which even faintly suggested justification for the deed.

” Then it seemed that Shelley‘s body was dragged out, his head was cut off and put in a bag.”