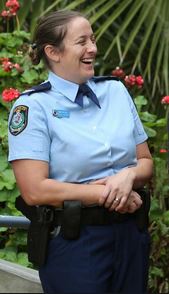 Awards:  No Find on Australian Honours system ( under either name )

Requested that no children attend

ELISE IS NOT mentioned on the Sydney Police Centre Memorial Wall, Surry Hills Although appears to be entitled to be mentioned.

Campbelltown Touch regret to announce the passing of Elise Monjo.   (Grommy).
Elise played with Campbelltown Touch some time ago and was well liked around the club.
Grommy also assisted with refereeing at club level as well as at local school gala days.
Please respect the privacy of the family in this sad time.

Emergency service workers, police, residents, community groups and students said no to domestic violence during the White Ribbon Day convoy through the Campbelltown and Macquarie Fields regions on Friday.

EMERGENCY service workers, police, residents, community groups and students said no to domestic violence during the White Ribbon Day convoy through the Campbelltown and Macquarie Fields regions on Friday.

The two convoys met at Campbelltown Sports Stadium in a show of support before men took the White Ribbon Day oath to say no to violence against women.

Attendees also took part in a tug of war to build comraderie.

“Everyone came together on the day for this very important issue,’’ she said.

“When we were driving around there were always people there supporting us on the route.’’

Now in its third year, the convoy aims to foster community cohesion, trust and respect for all participants.