Memorial Service:  A Celebration of Life will be held Wednesday 12 July 2017 at Caddens Retirement Village, 21 Braeburn Street, Caddens at 2.30 pm.

Frank Killen passed away and funeral notice in this mornings Daily Telegraph. He was a senior officer and the family well entrenched in Police history with siblings Louise F. KILLEN (Cummings) ( Regd # 11006 ) with John Francis KILLEN ( Regd # 19176 ) and Martin P. KILLEN ( Regd # 17965 ) former members too. R I P.

Born in Nabiac NSW, Australia on 15 February 1925
Passed away in Kingswood NSW on 14 June 2017
Late of Penrith District
Aged 92 years

Forever in our Hearts

A private funeral service will be held on Tuesday 20 June 2017. A Celebration of Frank’s Life will be held on Wednesday 12 July 2017 at Caddens Retirement Village, 21 Braeburn Street, Caddens at 2.30 pm.

Published in The Sydney Morning Herald on June 17, 2017 – See more at: http://tributes.smh.com.au/obituaries/smh-au/obituary.aspx?n=francis-leonard-killen-frank&pid=185822696#sthash.ZPEgyiu1.dpuf 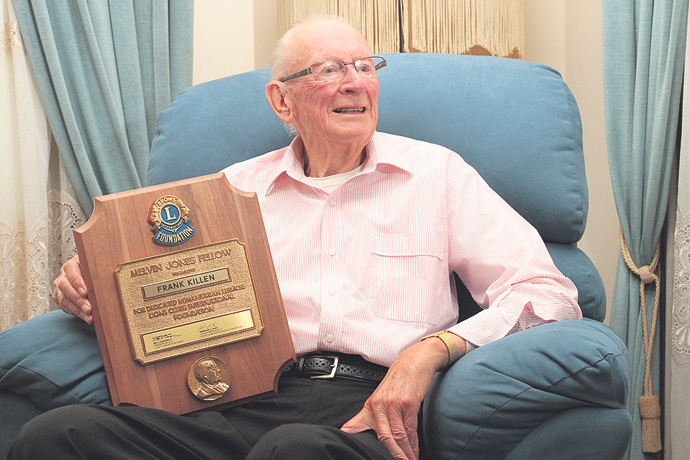 Lion Frank Killen, one of two founding members of the Penrith Lions Club, has been awarded the highly prestigious Melvin Jones Fellowship award for his ongoing dedication to the club.

Mr Killen started the Lions Club in 1957 and after more than 50 years of dedication, the Lions International’s Head Office in Oak Brook, Illinois, America bestowed on him the Fellowship.

“I appreciate the award but never set out to win it,” Mr Killen said.

“I started the Lions Club in 1957 and was formerly the president and then also the secretary for 17 years straight.

“One of our longest lasting community initiatives has been support for the Nepean Neonatal Intensive Care Unit. Each year for nearly 20 years we have provided them with finances to help import expensive equipment that they may need.”

Fellow Lions Club member, Barry Leavett-Brown said that Mr Killen has served the Penrith Lions Club earnestly with great determination and, as one would expect, had very high standards in his position of club secretary for more than twenty years.

“He has been a stalwart on the committee that runs the Chocolate Wheel project in the Westfield Plaza,” he added.

Charged with Murder of Brother-in-law

Appearing in Penrith Court last week on a charge of murder at Springwood, a Woodford man was alleged to have told police that he also intended killing the wife of the dead man.

The man charged, James Frederick Burne, 23, of Woodford, was committed by Mr. A. Cummerford, S.M., for trial at Central Criminal Court sitting to commence on February 26.

For the defendant, Mr. E. O’Loughlin said Burne would plead not guilty and reserved his defence.

Burne was charged with having murdered his brother in-law, Allan Frederick Edwin Wright, 27, at Springwood on January 15, 1962.

In evidence, Sergt. Ronald F. Stewart, of Lawson, said a man rang him at the Lawson Police Station early on Monday morning, January 15. The man had told the sergeant his name and said he had just killed Allan Wright.

Sergt. Stewart said Burne had told him that Wright was married to his (Burne’s) sister.

Burne had said: “I intend ed to kill them both. She bullied me, and they both annoyed me.”

Police also alleged that Burne had said Wright had sat up in bed and pushed the barrel of Burne’s gun away. “I pulled the trigger and he fell over the end of the bed,” Burne is alleged to have said.

Detective-Sergt. Francis J. Killen, of Penrith, told the court he went to a house in Springwood at 2.20 a.m. on January 15. A body was lying on the floor of the bedroom.

A post-mortem showed two gunshot wounds in the head, either of which could have caused death, Dr. E. Scott Young said in evidence.

Detective-Sergt. Killen, who had been accompanied to the house by Sergt. Stewart and Senior Constable W. Power, of Springwood, said Burne had told him at 3.40 a.m. he had not been at work the previous day.

After reading magazines and thinking a lot, he had decided to kill Allan Wright and Mrs. Wright, Burne told Detective-Sergt. Killen.

Widow of the dead man, Mrs. Eileen Wright, employed as a casual nurse, said she had been at work on the night of the shooting. There had been frequent disagreements between her and her brother, Mrs. Wright said.

“To be careless and reckless costs lives.

This is the winning safety slogan by Mr. D. E. Porter on car No. 29 in the Shell Safety Tour on Sunday.

He Is Malcolm Joseph Noonan, 36, a married man with five children, now a member of the R.A.A.F. station at Glenbrook.

Noonan was charged with: Stealing £155 from Tallaganda council between April 2 and April 7 while a servant of the council.

Stealing £164 from Tallaganda Council between April 17 and April 20.

Tallaganda Shire Council has its headquarters at Braidwood.

Mr. Finlay committed Noonan for trial after hearing evidence on both charges in Goulburn Court of Petty Sessions yesterday. The trial will be held at next Goulburn Quarter Sessions to commence on September 13.

The defendant has been allowed £50 bail on each charge. He reserved his defence.

Detective Francis Leonard Killen, of Penrith, said he had seen the defendant at R.A.A.F. Headquarters at Glenbrook on May 20 this year. The defendant had told him he had been in the Air Force since June 4 last year. Prior to that he had been Shire Clerk for the Tallaganda Shire Council.

He had told the defendant he (Killen) had a warrant for his arrest on a charge of stealing £155 from the Tallaganda Shire.

Cleve James Taylor, an A grade clerk employed by Tallaganda Shire Council, said he had been employed by the council for five years and knew the defendant during that period. On the morning of April 7, 1953, a Miss Morris, who is now Mrs. Gowen, told him something as a result of which he checked the receipt books and checked cash for the takings on April 2 in a drawer in the strong room. He had found a deficiency of £155.

There was a note in the drawer with Mr. Noonan’s initials, M.J.N., and £155 written on it. He would say the note was in Noonan’s hand writing. He had seen the defendant on April 9 when Miss Morris told Noonan there was a deficiency of £155 in the cash drawer Witness said the defendant had told him he knew it was missing. “He did not give a reason for it being missing,” witness said.

“He said he expected to receive a cheque in a day or so and would repay the money them ‘ Witness said he had found a further deficiency in cash in the strong room to the extent of £164 .on Monday, April 20. He did hot see the defendant that day and did not see him again as an employee of council. On May 8, 1953, Mr. Noonan had come to the shire office with his father and handed him a bank draft drawn on the Commonwealth Bank for £365 and 5/- In cash.

Witness said he had made out a receipt for £46/5/- for goods purchased from the council and given it to the defendant.

During the period from April 2 to April 20, he and Noonan were the only persons with keys to the strong room. “Only I and Mr. Noonan would have access to the safe after it was locked. “Money placed in the safe had been received on behalf of the Tallaganda Shire by the various employees in the office.”

“NO DOUBT MONEY WOULD BE REFUNDED”

The defendant, Noonan, asked the witness if he at any time had had any doubt that the money would be refunded. Witness : “I had no doubt at all.” To Noonan, witness said the Shire Clerk Would be “overall” responsible for any deficiency.

SYDNEY : A 22-year-old farm worker had become too scared to take delivery of a motor truck which he purchased from a Sydney firm with two forged cheques for £1318, Det. Frank Killen, of Parkes, said in the Quarter Sessions today.

John Whitfield Dunstan, of Cowra, pleaded guilty to having forged both cheques, one for £860 and the other for £458, in the name of his employer, Roy Attenborough. grazier, of Parkes. Dunstan also pleaded guilty to having uttered the cheques. Judge Redshaw sentenced Dunstan to 12 months’ gaol and said that after Dunstan had served a reasonable part of it, he might recommend release provided Dunstan’s family arranged to establish him on the land.

Detective Killen said that Dunstan, a former fireman in the N.S.W. railways, had, after separation from his wife at Newcastle some months ago, become farm laborer in the Parkes district. Stole Cheque Forms In December last while employed by Mr. Attenborough, Dunstan had stolen two cheque forms from Mr. Attenborough’s cheque book, made passable imitations of Mr. Attenborough’s signature and had negotiated the cheques in the purchase of a motor truck. ‘I think he is more foolish than criminal,’ Det. Killen told Mr. Trevor Martin (for Dunstan).

When arrested, said Det. Killen, Dunstan was employed as a laborer at the Cowra gas works and in his spare time assisted in the training of trotting horses. In refusing to grant Dunstan a bond, the judge, referring to a previous conviction against Dunstan in 1950 for cattle stealing, said: ‘This is your second step in crime.’

They found the body of his wife, Elizabeth Gertrude, aged about 40, in the kitchen, with a deep gash in the throat.

The couple’s three children, aged nine, six, and three, were in a bedroom adjoining the kitchen. They were unharmed.

Police said that Nicholls told his brother on the telephone yesterday morning that he had killed his wife and intended to “do away with himself.”

The brother telephoned the police.

They found Nicholls’s body in the washhouse.

Mrs. Nicholls’s body was covered with a tablecloth.

Police believe that Nicholls murdered his wife on Saturday.

During the week-end, he made the children stay in the bedroom.

He cared for them, washing them and preparing their food.

The police took the three children to the homes of neighbours.

Neighbours told the police that Nicholls, a hard working man, worried unnecessarily about his farming affairs.

Three detectives, whose CIB car was in a collision at Matraville last night with an oil waggon, each received injuries to the spine and fractures of the pelvis, an X-ray showed today.

The detectives, Norman Thomas, Thomas Quinn and Frank Killen, have all shown improvement since their admission to Prince Henry Hospital.

Det.-Sgt. Bennett Toms, who was also a passenger in the police car, was treated in hospital for severe shock. He is still too ill to resume duty.

In the collision, which occurred in Bunnerong Road, the police car was wrecked.

Detectives In Mangled Car SYDNEY, Friday.- Four Sydney detectives were in a police car when a 10-ton oil tender capsized and crushed it to-night at Matraville.

The tender loaded with 500 oil drums, is believed to have got out of control while rounding a corner in Bunnerong Road. The tender veered across the road and capsized on the police car, crushing it.

The car was a total wreck.