Zagami ( Frederick John):
Fred passed away at home on 02.12.2016.
Freddie was a true gentleman, loving husband to Penny, fantastic dad to Jemal and Natalie, and much loved Poppie to Matthew, Noah, Amy and Daisy.
Poppie, the world is a lesser place without you in it. You have left an indelible mark on the lives of all that knew you. You leave a proud legacy and memories that will be cherished forever.
Rest in peace, our beautiful Poppie.
All our love, Penny, Jemal, Natalie, Damien, Matthew, Noah, Amy and Daisy xxxxxxxx

Fred you were a true gentleman, your kindness and love of life and family will never be forgotten. We will miss you terribly and you will live in our hearts and memories forever. All our love and sympathy to Penny, Natalie, Damien, Amy, Daisy, Matthew, Noah and Jemal. Brian and Rita, Francesca and Marc and Rebekah and Ben

ZAGAMI (Frederick):
Our deepest sympathy to Penny and family on the sad passing of Fred. A respected work colleague over years gone by.
Bill and Pam Carpenter.

ZAGAMI (Fred):
A great friend, a devoted family man, liked a joke, a laugh and always ready to help. A good man. You will be greatly missed by many people. CIB and Bunbury Commercial Club Bowls.

ZAGAMI (Fred ): Sympathy to Penny and all his family and friends.
Great mate and Colleague.
Bill and Jean Burnett
DET. INSP. RET.

ZAGAMI (Fred ): Deepest sympathy to Penny and family. An old workmate whose practical jokes will always be remembered.
Jim and Judy Migro

ZAGAMI (Fred):
Our deepest sympathy to dear Penny and family on the sad loss of Fred.
Frank and Gaye Yakas and family

ZAGAMI (Fred):
Our deepest sympathy to Penny and family. Fred will be remembered always. Peter and Barbara Walsh

Zagami ( Frederick John):
Farewell to our long-time friend and great mate Fred. We shared many happy times together, from boyhood, through our teen years and throughout our lives. Deepest sympathies to Penny, Jemal, Natalie and families.
Graeme, Don, John and Bruce of the Shack Mob, East Fremantle

ZAGAMI (Fred ): With great sadness, we say goodbye to our respected friend and colleague, Fred. Our deepest sympathy to Penny and family. He will be missed. Offender Review Unit/Prosecuting WA Police.

ZAGAMI (Frederick ): Our deepest sympathy to Penny, Natalie, Jemal and families on your sad loss. Uncle Freddy, we cherish the love and happy memories you gave us. May the angels embrace you in their wings. Your love and light will warm our hearts forever. Lynette, Tom, Thomas and Jemma.

ZAGAMI (Fred):
Our deepest sympathy to Penny, Jamal, Natalie, Damien, Lorna and Colin. Our thoughts and love to you all on the loss of our dear cousin Freddie. He will be sadly missed. Stephanie, Eileen and families. Always a smile and a joke

Zagami (Frederick John):
Happy memories of our fun loving “Freddie” taken from us too early.
Our deepest sympathy and love to Penny and family on their sad loss.
He will be greatly missed.
Fred, Wendy and Family

WA POLICE UNION Members are invited to attend the Memorial Service for our Retired Member Fred John Zagami 3854 at Bowra & O’Dea Hilton on FRIDAY (9.12.2016) at 2.30pm. 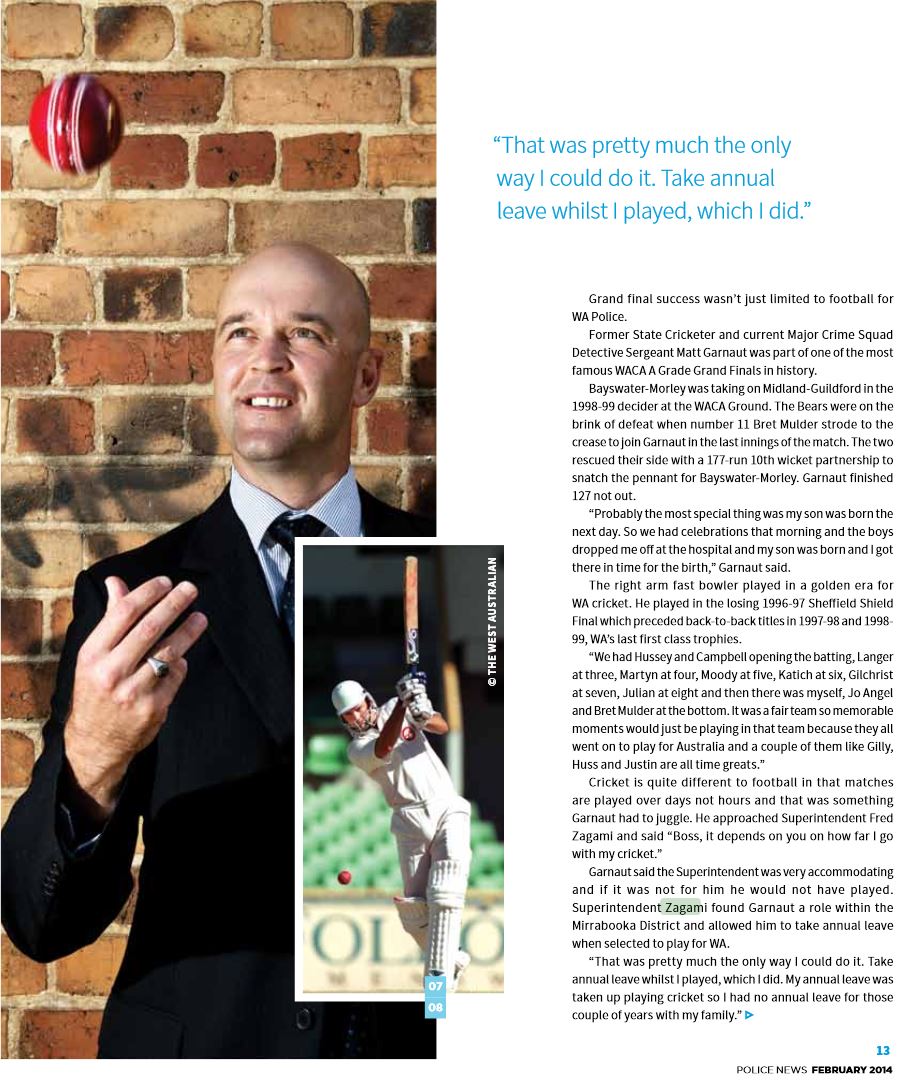 A convicted rapist shot dead by a police officer in Western Australia was wanted by Victorian detectives over the stabbing murders of two sisters in Melbourne.

Melbourne man William John Watkins, 38, was fatally shot in the chest yesterday after he bashed acting Sergeant Shane Gray on a highway south of Karratha, in WA’s remote Pilbara.

Watkins was pulled over by Sgt Gray on suspicion of stealing petrol, but it emerged today he had a history of convictions for rape and assaulting police.

He was also wanted by Victorian police for questioning over the murders of Colleen Irwin, 23, and her sister Laura, 21, who were neighbours of Watkins in the Melbourne suburb of Altona North.

The sisters were found dead from stab wounds in their home in Millers Road on Saturday evening. They may have been dead since the previous day.

Watkins lived in a block of flats in the same street.

“He (Watkins) is a person of interest in Victoria for a double homicide that happened there last Friday,” WA police Superintendent Fred Zagami, of Karratha police, said today.

However, when he pulled over Watkins yesterday, Sgt Gray did not know the Melbourne man was wanted for questioning over the murders because Victorian police did not issue an alert until this morning, said Supt Zagami.

Watkins was shot when stopped for allegedly speeding away from the Fortescue Roadhouse, south of Karratha, without paying for petrol for his Victorian-registered white Toyota station wagon.

He was killed during an altercation with Sgt Gray, who suffered a broken nose and suspected head fractures.

“We can tell you that at least two shots were fired and at least one of the projectiles struck the person who is deceased in the upper chest area and we are not too sure about the second shot,” said Supt Zagami.

“I have personally spoken to the deceased’s sister and his father in the eastern states and explained to them how the incident has unfolded here.”
Sgt Gray, an experienced officer who trained others in the use of force, was traumatised by the shooting, he said.

“The last thing a police officer wants is to shoot somebody and death results … it’s a split second decision between saving their life or the life of a member of the public.”

Sgt Gray was flown to Perth overnight for treatment but today was still too ill to be questioned.

Both WA and Victorian police called for public help to piece together Watkins’ journey after he left Melbourne.

Police said officers who searched Watkins’ car yesterday found little or no luggage, suggesting he may have fled Victoria in haste.

“The vehicle may have travelled from the WA/SA border at speed over the last few days,” said Supt Zagami.

“With his dark cap and red shirt and dark glasses and tattoos on his arms he should stand out.”

Meanwhile, the parents of Colleen and Laura Irwin said news of Watkins’ death did nothing to ease their grief.

“The Victorian police are still investigating circumstances of Colleen and Laura’s death and will continue to do so,” a family spokesman said in a statement.

“This news does nothing for the grief in Shirley and Allan’s hearts.

“Shirley and Allan would like to thank the Victorian and West Australian police and all involved for the wonderful work they have done to find Colleen and Laura’s killer.”

Watkins’ neighbours said he had lived there for about a year and kept to himself.

Peter Schroder said he passed him in the stairwell occasionally and he was no trouble.

This is a transcript from PM. The program is broadcast around Australia at 5:10pm on Radio National and 6:10pm on ABC Local Radio.

This is a transcript from The World Today. The program is broadcast around Australia at 12:10pm on ABC Local Radio.

KAREN PERCY: Police in Victoria are under fire this afternoon for not putting out an all-states alert for a murder suspect who was ultimately shot and killed by a Western Australian police officer on Tuesday.

38-year-old William John Watkins was a suspect in the double murder of two sisters in Melbourne, but only police officers in Victoria had been asked to look out for the man.

Victoria’s Police Assistant Commissioner, Simon Overland, has been defending his force, saying it would not have been appropriate to put out an all-states alert based on the evidence available at the time.

LYNN BELL: 38 -year-old William John Watkins has, in the past, been convicted of rape and assault. And from the early stages, he was a person of interest to police investigating the murders of Laura and Colleen Irwin, who were raped and stabbed to death on Friday night.

He lived next door to the sisters, who were 21 and 23, and this morning the Assistant Commissioner for Crime with Victoria Police, Simon Overland, told 3AW’s Neil Mitchell, that DNA tests have now been done on blood samples.

SIMON OVERLAND: It was DNA testing of blood samples or blood that had been found.

NEIL MITCHELL: What, of his blood, or victims’ blood?

NEIL MITCHELL: So victims’ blood was found in his house?

SIMON OVERLAND: Yes. Well, that will be the allegation, yes. I mean, I make the point that all of this will need to be subject to inquiry here in Victoria, but that’s what will be alleged.

LYNN BELL: A bulletin went out to all police in Victoria at half-past-one on Tuesday, telling officers to detain Watkins if they saw him, and call the homicide detectives. But Victorian police did not notify officers interstate about the investigations.

William John Watkins was shot dead by a police officer in Western Australia on Tuesday morning, after he drove away from a petrol station without paying for fuel.

It’s alleged Watkins hit the officer with a wheel brace when he was pulled over, and Acting Sergeant Shane Gray fired two shots.

And he says there was no reason to notify interstate officers earlier in the week.

It wasn’t until yesterday afternoon, when we got the forensic test back, that he went from being a person of interest to a firm suspect, and we were then in the process of disseminating that information across the rest of Australia when we were then able to make the connection with the events in Western Australia.

LYNN BELL: But Simon Overland says that deciding when to disseminate information is a matter of professional judgement that is open to interpretation.

SIMON OVERLAND: Did we get it right in this case? We’ll never know. I mean, had we actually put that information out into the public domain, and that shooting then happened in WA, you would quite rightly be asking us questions of did we go too early?

It’s difficult in certain circumstances such as this to know did we do… you know, was the right decision made? All I can say to you is that I’m satisfied with the way this matter has been handled.

KARL O’CALLAGHAN: Victoria Police, to my knowledge, didn’t become aware this person was travelling until Monday in any event. So by the time those alerts come out it takes some time to do that. So I don’t think there’s any miscommunication, I just think it’s the turn of events.

FRED ZAGAMI: We’d expect around Australia that police, if a person is on the run for a murder, that we put out timely information to protect the community and also the police (inaudible) they have a traffic stop.

LYNN BELL: In Western Australia, Sergeant Gray is recovering from the head injuries he suffered on Tuesday.