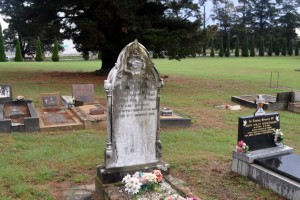 On the evening of 17 December, 1920 neighbours rang Moss Vale police to say that they could hear shooting coming from Major Thomas La Bartes house, Old Castle, near Bowral. Sergeant Mackie then rang La Barte, and asked him anything was wrong, however all the major would say was, Ive gone over the line, Ive gone over the line! Suspecting that something serious was occurring, or had occurred already, the sergeant quickly sent Constable Mitchell out to the house on a motor cycle while he (Sergeant Mackie) followed on a push bike. On the way to the house Constable Mitchell met Constable Edward Charles Finch of Moss Vale police, and they both went out to La Bartes home together.

At the dwelling, which appeared quiet and deserted, the three policemen consulted for a few minutes and then decided to search inside. They crept up to the front bedroom window, and looking through, could see Mrs La Barte lying on her back on the floor. The police then separated, with Mitchell going to the back door and the other two going to the front door. Constable Mitchell then entered the house through the door and into a hallway. A few moments later a shot was heard, followed by a heavy thud on the floor. Fearing that Mitchell had been shot, Sergeant Mackie immediately ran in through the back door and, reaching the end of the hallway barely escaped being shot in the head when another shot dislodged plaster from the wall near his head. Although both Sergeant Mackie and Constable Finch made several attempts to enter the hallway they were driven back each time by the unseen offender.

Police reinforcements had begun to arriv