A POLICEMAN has been killed on his way to work in a tragic car crash in Shepparton.

Acting Sergeant Gavin Sproule, 37, from Kialla, was driving to work when he collided with another car at the intersection of Verney Road and Nightingale Way just after 9pm on Saturday.

He was flown to hospital but died on arrival. The Shepparton-based officer is being mourned by loved ones.

“He had recently spent a period of time carrying out duties as a supervisor and he was well on his way to achieving his goal of promotion.

“He was much loved and respected by all. He is remembered by his wife and children.

“Our thoughts are with his family and friends at this tragic time.

“It will have an impact on our local members who do a wonderful job and who have lost a colleague and a friend.

“Victoria Police will continue to support our members in these tough times.”

Friend Annette Newman wrote on Facebook: “Rest in Peace Gavin. You will be sorely missed by everyone that knew you.”

“You will be forever missed but never forgotten. Will always love ya mate you were one in a million! And I was very lucky to call you my friend,” read another post.

“The Police Association is deeply saddened by the death of one of our members, who was killed while on his way to working night shift in Shepparton,” a spokesman said.

“We offer our deepest condolences to his family, and we have reached out to them, and to the member’s colleagues who attended the scene, to offer any assistance and support they require.

“A senior Police Association representative is in Shepparton today to help guide affected members through this tragic time.”

The female driver of the other car was taken to hospital with minor injuries.

The vehicle flipped and came to a rest on its roof.

A police officer killed in a car accident while on his way to work on Saturday night has been remembered as a “true legend”.

Acting Sergeant Gavin Sproule, a member of Shepparton Highway Patrol, was on his way to night shift when a car collided with his Toyota ute about 9pm.

The Kialla man, a father of two young children, was airlifted to Melbourne but died on arrival.

“He was vibrant and well-respected member who is sadly missed,” he told reporters.

“[He] has been a local member for a number of years having worked in Shepparton and most recently in an acting in the role as a supervisor.”

Inspector Hargadon said a number of officers who had attended the scene on Saturday night were friends and colleagues of Mr Sproule.

“It is a significant event when people lose their lives on our roads and no doubt it always has an impact on the wider community,” he said.

“The complexity for us is that it is a colleague, and unfortunately, some of his peers and his friends, they responded to the horrible scene we were faced with on Saturday evening. They did so in such a manner that was outstanding and [I’m] certainly extremely proud of the efforts that they put in on that evening.”

Inspector Hargadon also praised the efforts of other emergency services and the greater community who provided the support on Saturday night at the scene of the crash.

He said officers who were traumatised by the incident were receiving ongoing care and counselling.

Mr Sproule, 37, has been remembered as a much-loved officer, with The Police Association said they were “deeply saddened” by the tragedy.

“We offer our deepest condolences to his family, and we have reached out to them, and to the member’s colleagues who attended the scene, to offer any assistance and support they require.

“A senior Police Association representative is in Shepparton today to help guide affected members through this tragic time.”

Tributes have poured in on social media for Mr Sproule, who was described as “a really great bloke” and “true legend” who would be sadly missed.

Investigators believe that a vehicle travelling on Nightingale Way turned right onto Verney Road and collided with Mr Sproule’s Toyota.

The female driver of the other vehicle was transported to a local hospital with minor injuries.

[divider_dotted]
SPROULE Gavin Matthew
Acting Sergeant 36488
Passed away tragically as a result of an accident on Saturday February 17, 2018.
Dearly loved husband of Jayne, adored father of Max and Beau,
beloved son of Paul and Shirley,
loved brother of Brad.
Forever Loved Sadly Missed
.
February 22, 2018
I remember Gavin as a young man growing up. Gavin was always a happy and polite young man with a wonderful outlook on life. He will be sadly missed. Our thoughts and prayers are with the family, Paul,Shirley,Brad and their families.
Brendan Gellion,
Geelong
February 23, 2018
SPROULE Gavin Matthew
Acting Sergeant 36488
The funeral service to celebrate the life of Acting Sergeant Gavin Matthew Sproule will be held at the Sir Ian McLennan Community Centre Echuca Road, Mooroopna on Monday February 26th, 2018 commencing at 1.00pm.
A private cremation will follow.
In Lieu of flowers donations can be made to the Victoria Police Legacy.
Envelopes will be available at the Service.
POLICE HONOURS.
Owen Mohan Funerals

Gavin, 37, died after a car crash at Shepparton on Saturday night.

He had worked as an acting sergeant for the Victoria Police, based in the Goulburn Valley, for about 10 years.

Gavin grew up at Pimpinio before his father Paul took the reins as the police officer at Minyip.

“He was very adventurous, very boisterous, full on, flat out. But then he also had a very soft side,” he said. “He was very caring and loving.”

Brad said Gavin took those traits into fatherhood and became an exceptional parent.

Gavin and wife Jayne have two sons, Max and Beau.

“He and Jayne were a really good couple. There are always highs and lows in relationships and they just got through everything.They worked together,” Brad said.

Brad said Gavin wanted to follow in their father’s footsteps as a police officer, but tried several jobs before he embarked on that journey.

“He was a farm hand and did a bit of truck driving, but he loved the police force,” he said.

Gavin started his policing career in Horsham and later worked in Shepparton.

“When he was younger he pushed a lot of boundaries but he ended up being a very respected and very good police officer,” Brad said.

“He loved the job and was good at it.” 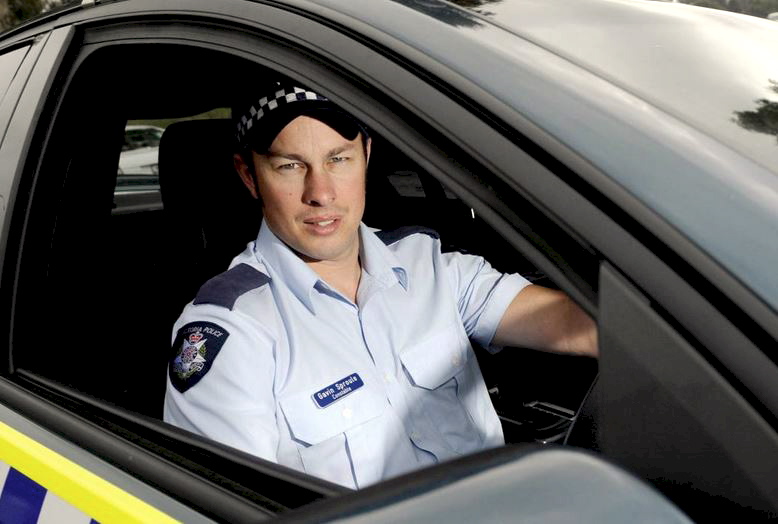 The life of Shepparton police Acting Sergeant Gavin Sproule will be celebrated at a funeral service in Mooroopna on Monday.

Acting Sgt Sproule was killed when his car and another vehicle collided at the intersection of Verney Rd and Nightingale Way just after 9pm — on Saturday, February 17.

Earlier this week colleagues remembered Mr Sproule as a ‘‘vibrant and respected’’ man.

‘‘He’s a brother, he’s a father, he’s a husband, and he’s a valued member of our organisation,’’ Shepparton police Inspector Troy Hargadon said.

‘‘To lose a life at any circumstance is a tragic event, and it has a significant impact on anybody, whether it’s a member of the police force, or a community member.

‘‘I’d like to thank the community for their support. Please stick with us, we are here, we are dedicated to serving you. We will continue to do that day in, day out, regardless of the circumstances.’’

Insp Hargadon said traffic diversions would be in place on Monday with vehicles expected to be diverted on Echuca Rd, Mooroopna.

‘‘Respectfully, we ask the community to be mindful,’’ he said.

Hundreds of people are expected to attend the full police honours service including police horses, motorbikes, vehicles and a pipe band.

Acting Sgt Sproule had been stationed at Shepparton and Mooroopna, for a number of years, and also had connections to the Cobram and Wangaratta forces.

The funeral service will be held at the Sir Ian McLennan Community Centre on Monday, February 26 commencing at 1pm.