Memorial located at: a large ‘Tablet’ to the Memory of George placed in the Bourke St ( Sydney ) church – Sunday ? December 1905 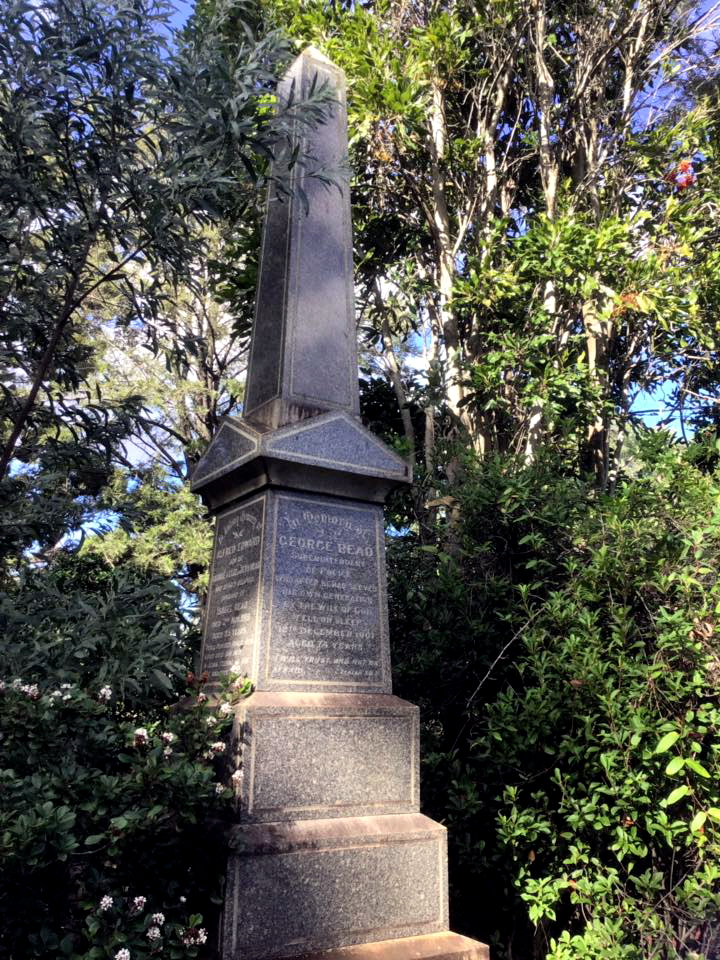 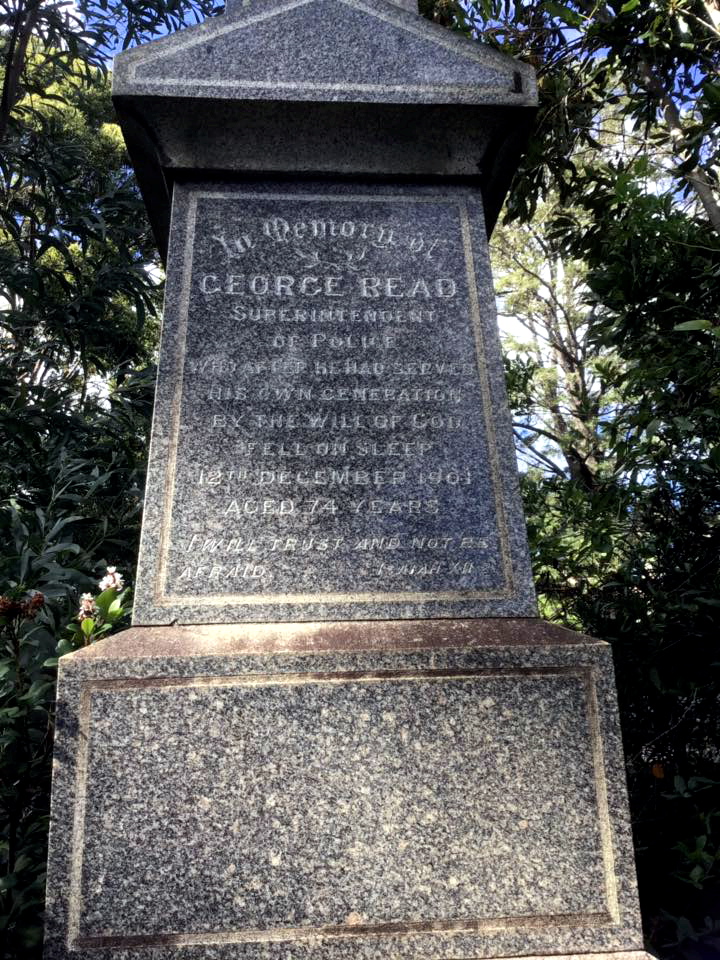 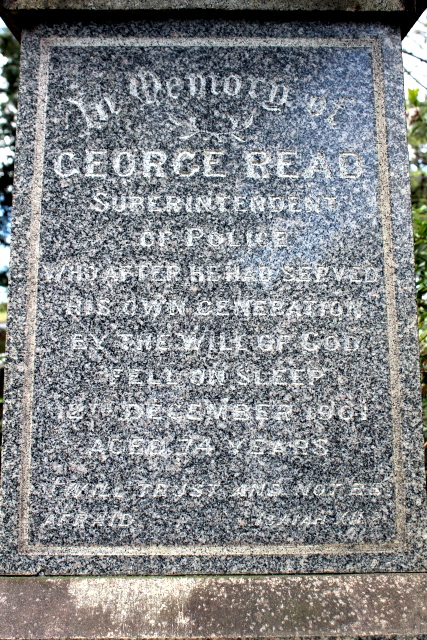 Cause of death, senile decay.

At the time of his death he was the oldest serving Policeman in New South Wales.

1855:  Arrived in Sydney with fellow London Police Officer SAUNDERSON who was later to become Superintendent at Bathurst District. Both READ and SAUNDERSON were part of an original detachment raised in London to form the nucleus of the present Force. READ was the Officer in Charge of the detachment, SAUNDERSON was his second in charge and joined the NSW Police.

1875: READ was promoted to Superintendant

12/12/1901: Died at his residence 507 Dowling St, Moore Park. Among the many senior members of the NSW Police mourners was Inspector General FOSBERY and Superintendent SAUNDERSON, Bathurst.

It would know appear that Superintendent SAUNDERSON with whom READ arrived in 1855 may be the oldest serving NSW Police Officer at the time in 1901.

George was married twice in Sydney. His first wife died 1873 and they had 4 children. He married again in 1875 and had 5 more children. His last born was a daughter in 1886 when he was 58 years old.

Spanning over 5 levels, this updated registered 10 room boarding house with approval for a maximum of 20 occupants offers single, double & extra-large rooms, some with balcony’s and bathrooms & city skyline views. A sought after and rare find with consistent income stream and strong growth investment opportunity.

Set within a fine pocket of Surry Hills and moments from famed eateries, Moore Park, Centennial Park and transport.

A memorial tablet to the memory of the late Superintendent George Read has been placed in the Bourke-street (Sydney) church by the officers and men of the police force.

The ceremony of unveiling the tablet took place on Sunday night ( 24 December 1905 ) in the presence of a large congregation; which included a number of officers and members of the police force.

An address in appreciation of the deceased, who was a member and trustee of Bourke-street, was delivered by Rev. J. W. Collier.

The late Superintendent Read was the honoured father of Rev. George Read of the Homebush Circuit.

The Executive Council on Tuesday approved, on the recommendation of the Inspector-General of Police, of the following police promotions : —

Acting-Superintendent Stephen J. Cotter, appointment to that rank confirmed, and to take effect from December 13 last.

Acting Sub-Inspectors A. A. Hojel, A. A. Sykes, H. Trenchard, J. McVane, and Thomas Kendall (storekeeper), appointments confirmed to the rank of sub-inspector from July 1 last.

The oldest policeman in New South Wales, as far as length of service is concerned, died on December 12, when Superintendent George Read, who for over a quarter of a century controlled the metropolitan district, breathed his last at his residence in Dowling-street, Moore Park. The end was not entirely unexpected by either his family or his colleagues, for Mr. Read had been in ill-health for the past six or eight months, and it was generally recognised that the end of his useful career was at hand. The deceased gentleman shared with Superintendent Saunderson, of Bathurst, the distinction of being, as stated, the oldest policeman in this State, and of the two Mr. Read held the senior position. Both officers came to New South Wales in the fifties, in a detachment of police who had been engaged in London, and who formed the nucleus of the present force. Of this detachment Mr. Read came out as officer-in-charge, having had several years’ experience previous to that in England. He and Superintendent Saunderson joined the police here on January 13, 1855. By degrees the merit of both gentlemen won for them promotion, and on January 1, 1875, Mr. Read was appointed superintendent, which is the highest position next to that of the Inspector-General. For a good many years before this, however, he had had the control of the police of Sydney. In April last year he obtained nine months’ leave of absence, and this was afterwards extended. Mr. Read, who died from senile decay, was 73 years of age. He was married twice, and several children, besides his second wife, survive him.

Mr. N. Larkin, who has been performing the duties of superintendent of the metropolitan division for some time past, was recently permanently installed in the position, and his appointment as Mr. Read’s successor has proved to be generally popular with the men of the police force. Speaking of Mr. Read’s death, Mr. Fosbery, the Inspector-General, said:-“I cannot speak in terms too high of Mr. Read’s public services, and of his integrity of purpose, and knowledge of, and close attention to, his duties during his very long and very useful career.” It may be mentioned that Mr. Read, for some months, carried out the duties of Inspector General of Police, during the absence of that officer, in 1888, from New South Wales.

Superintendent George W. Read, one of the oldest members of the force in New South Wales, who was in charge of the metropolitan police district, died yesterday at 1 30 pm, at his residence, 507 Dowling-street, Moore Park.

The deceased officer, who was highly respected throughout the service, had been in bad health for some little time, and was granted leave of absence lately with a view to his retirement.

Dr. Piton, the Government Medical Officer, was his medical adviser. The late Mr. Read leaves a widow and several children.

The late superintendent arrived in Sydney in January, 1855, he being one of a number of the London Metropolitan Police who came out to the colony in that year.

He was placed in charge of the Sydney police as sub-inspector in March, 1862 – nearly 40 years ago.

On the recommendation of Inspector-General Fosbery, who always regarded him as a very worthy and conscientious officer, he was advanced to the position of Inspector on January 1, 1875, and subsequently he was made superintendent of the metropolitan district.

The deceased officer was 72 years of age.

In April last year he obtained nine months’ leave of absence, which was subsequently extended. On one occasion he carried out the duties of Inspector-General of Police during Mr. Fosbery’s absence form the State.

Mr. Read’s position was recently allotted to Mr. N. Larkin, who had been for some time in temporary control of the metropolitan police.

It is hereby notified that the undermentioned Police Officers have been appointed by the Board of Health to be the Local Authorities under action 9, sub-section 1 (b) of the ” Public Health Act, 1896,” for the respective Police Districts mentioned, namely:—

Superintendent George Read was appointed to act as Inspector-General of Police during the absence of Mr. Edmund Fosberry on a trip to Europe.

Excellency the Governor, with the advice of the’ Executive Council, has been pleased to approve of the following promotions and appointments in the Police Force,