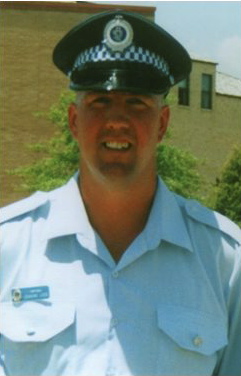 Cause:  MVA – Driver – Travelling to work 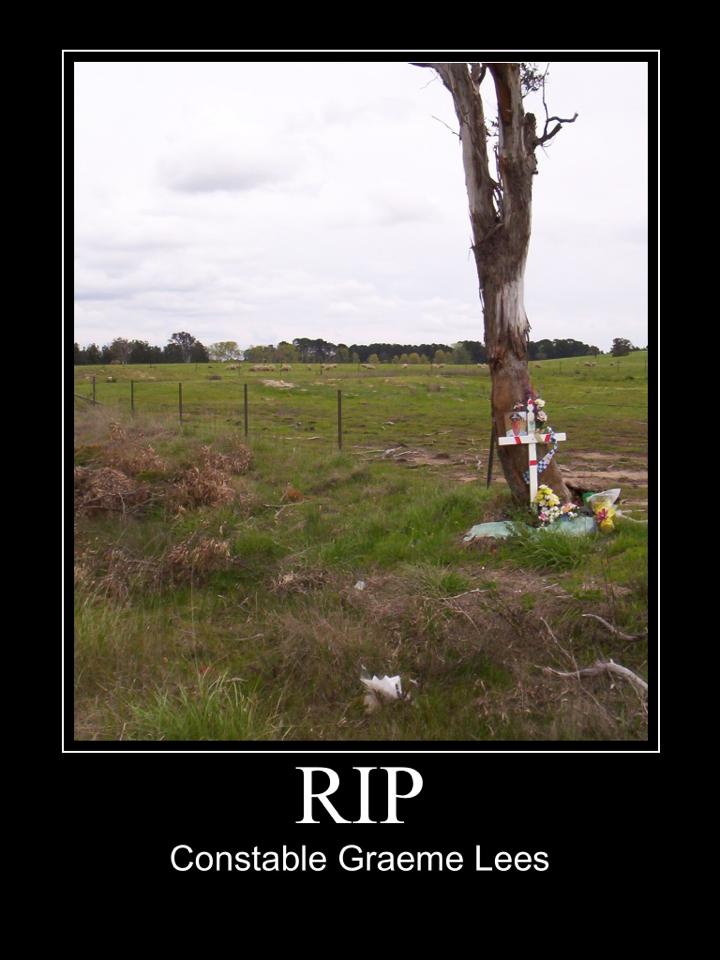 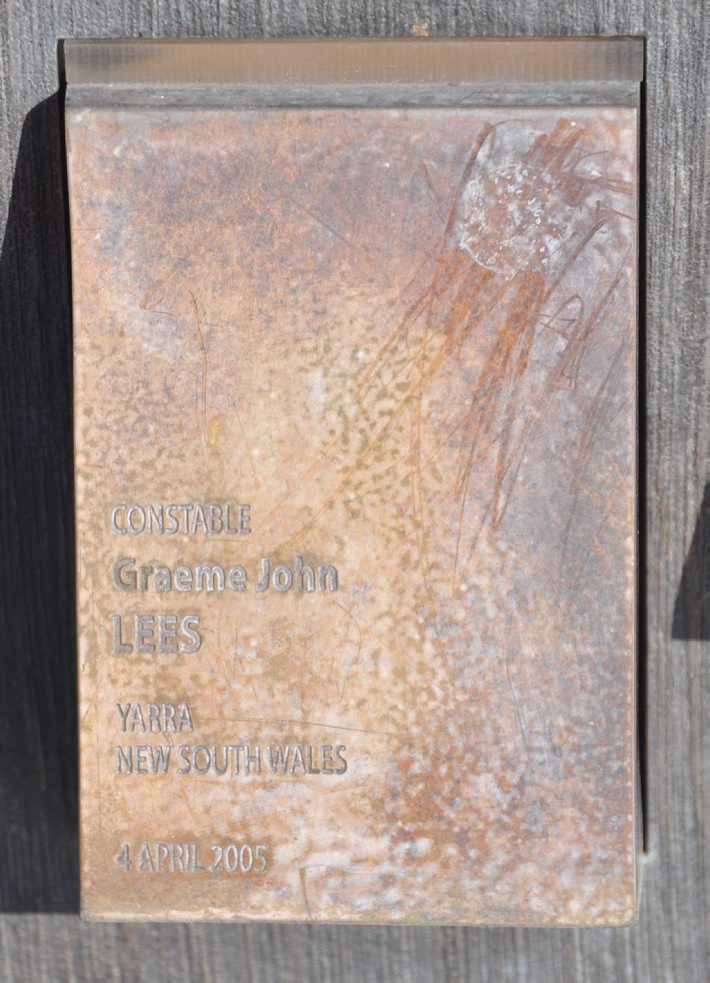 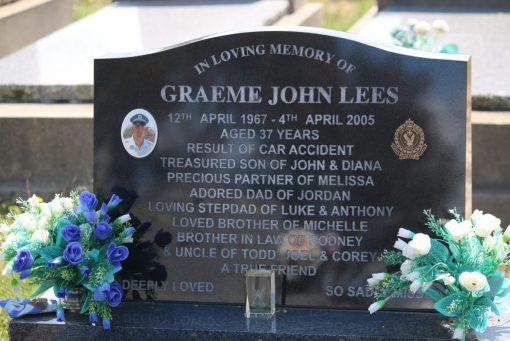 GRAEME IS mentioned on the Police Wall of Remembrance

On 4 April, 2005 Constable Lees was driving along the Federal Highway, just south of Goulburn, on his way to Queanbeyan Police Station to commence duty.  As his vehicle was negotiating a series of bends at Yarra, the vehicle left the roadway and collided with a tree, fatally injuring the constable.

The constable was born in 1967 and was sworn in as a probationary constable on 20 December, 2002.  At the time of his death he was stationed at Queanbeyan.

Graeme John Lees
12.4.1967 ~ 4.4.2005
How lucky we were and very proud too, to have such a wonderful son as you.
This day is remembered and quietly kept, for the memories of you Graeme, we will never forget.
So deeply loved, so sadly missed Mum & Dad

His light will always shine

ONE of the city’s shining lights and a mentor within the police community has lost his life in a single-vehicle accident on the Federal Highway on Monday morning.

Constable Graeme John Lees‘ death has shocked and saddened the Goulburn community who knew him as a loyal and caring person, an accomplished cricketer and hockey player, a tall man with a big heart and an easy going nature.

The 37-year-old was travelling from his Eastgrove home to work at Queanbeyan police station on Monday when his car left a straight section of the southbound lane of the Federal Highway, 1km north of Rowes Lagoon, at about 5am.

His light-coloured Commodore sedan careered down a slight embankment and crashed into a tree in a paddock on the western side of the road. Police said he was killed instantly.

A motorist discovered the accident and contacted emergency services shortly after 6am.

Goulburn born and bred, Mr Lees was the only son of John and Diana Lees of Kelso St, sister to Michelle and a loving father. He attended Goulburn South Primary and Goulburn High schools and worked in several jobs before training as a psychiatric nurse.

He was a giant in the local sporting community, having played through the local and representative hockey and cricket ranks, forming enduring friendships along the way.

The Anglican Diocese of Canberra & Goulburn

We remember those in our Cathedral Book of Remembrance: Annie Jean Docker, Graeme John Lees.

Graeme LEES passed away in Goulburn, New South Wales. The obituary was featured in Goulburn Post on April 1, 2019.

There’s not a day goes by that I don’t think of you!
You would so proud of the boys.
What an AMAZING guy you were & the lessons you taught me along the way!
And although our marriage didn’t work I was so very lucky that we ended up with a beautiful friendship that makes me smile when I get to sad!
I miss you!
Love Always

A police officer has died in an car accident in southern New South Wales early this morning.

Constable Graeme John Lees, 37, died when the car he was driving crashed into a tree off the Federal Highway, south-west of Goulburn.

Constable Lees was on his way to work at Queanbeyan police station.

He leaves behind a partner and two children.

Inspector Ian Davey from Queanbeyan police says Constable Less was a valued member of the force.

“He surely will be missed, he’s the type of person that we certainly do like to see in the police force and he was very well respected by his colleagues,” he said.

“He’s certainly a great and valued member of the police who will be lost and thought of dearly.”

Constable Lees’ colleagues are being counselled.

Police officer to be farewelled today

A police officer who died in a car accident in the NSW Southern Tablelands will be farewelled today.

Constable Graeme John Lees, 37, died on his way to work on Monday when his car left the Federal Highway and hit a tree near Collector.

Constable Lees’ colleagues have paid tribute to him, remembering a dedicated officer who had a promising career.

A police funeral will be held this afternoon at the Anglican St Saviours Cathedral in Goulburn.

This was published 15 years ago

Four people, including a police officer, were killed in separate crashes on NSW roads over a 24-hour period.

One woman died when her car ran off the road and hit a tree south-west of Sydney.

The NSW Ambulance Service said the woman, whose age was not known, died instantly when her vehicle crashed on Mount Hercules Road at Razorback, near Picton, about 5.50pm (AEST).

Passers-by pulled the woman from her wrecked car before it burst into flames, but she was already dead, an ambulance spokesman said.

The woman was the vehicle’s only occupant.

Earlier, a 59-year-old female British tourist was killed when the car in which she was travelling collided with a truck in southern NSW about 11.45am (AEST).

The vehicle veered onto the wrong side of the Monaro Highway at Bredbo and into the path of the truck, a police spokeswoman said.

The driver of the car, a 67-year-old man from the United Kingdom, was being treated in Canberra Hospital after suffering serious fractures in the crash.

A NSW police officer died in a single-vehicle crash in the state’s south.

Constable Graeme John Lees was believed to have been on his way to work at Queanbeyan police station when the crash occurred about 6am (AEST) today, a police spokesman said.

It appeared the sedan he was driving left the Federal Highway at Rowes Lagoon and crashed into a tree, the spokesman said.

A motorist found the crashed vehicle and called emergency services.

“Constable Lees was an outstanding police officer who was well liked by his colleagues and he will be sadly missed,” Superintendent Worboys said in a statement today.

“Our deepest sympathies go out to his family and friends.”

Constable Lees, who lived in the Goulburn area with his family, started work with the Monaro local area command in December 2002.

He worked previously at the Goulburn Base Hospital.

And police are appealing for witnesses to a fatal single vehicle collision at Bellevue Hill at about 1.30am this morning.

The 57-year-old male driver from Vaucluse was taken to St Vincents Hospital, where he was pronounced dead on arrival.

Anyone with information about the incident, or the events leading up to the fatal collision, is asked to contact Rose Bay Police or Crime Stoppers on 1800 333 000.

Notice of Motions & Orders of the Day.

That this House expresses its deep sympathy to the family, friends and work colleagues of Police Constable Graeme John Lees who died in a single vehicle accident on the Federal Highway on 4 April 2005 while driving to Queanbeyan Police Station.