Next of kin:  Son of Henry & Mary Jane Chadban 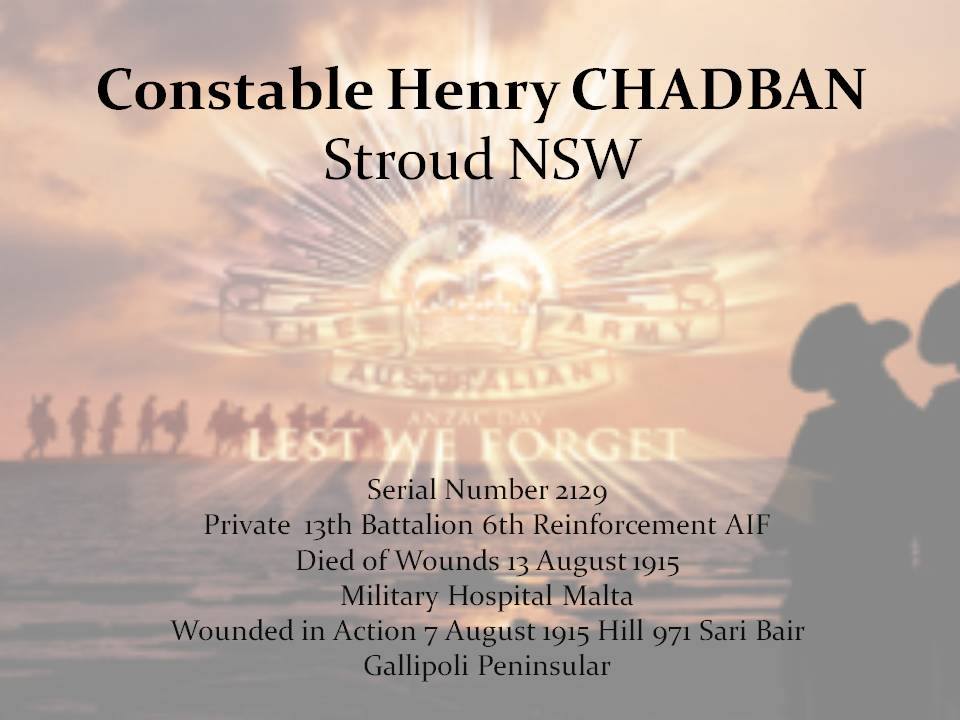 Victory Medal – posthumously received by his father on 25 December 1922

A Violent Customer. Olaf Anderson (21), seaman, was charged with maliciously damaging one door and two windows, the property of Cenuto Gabriel Anderson. Accused said he pleaded guilty to breaking one window, but to nothing else.

Prosecutor stated that the accused came to the Blue Bell Hotel, of which witness was lessee, somewhat the worse for liquor, shortly before eleven o’clock on the previous evening. He smashed in the panel of the door, but whether he kicked it in or struck it with a stone he did not know. He also broke two of the windows with a stone.

William Craig was charged with having been drunk and disorderly in a railway carriage on October 26. Defendant, who was represented by Mr. A. H. James, pleaded not guilty.

Constable Chadban said he was a passenger on the train which left Toronto for Newcastle at 6p.m. on October 26. Defendant got in the train at Cockle Creek. He was very much under the influence of drink, and went into the guard’s compartment. He sat on the guard’s seat, and when asked to go into the other part of the compartment refused to do so. He stopped arguing with the guard for five minutes. Witness told the defendant he was a constable, and took his name and address.

To Mr. James: The guard’s compartment was the end portion of a long American car.  Defendant could walk straight, and board the train. Defendant denied that he was drunk, or in any way disorderly. He was not aware that the compartment was reserved for the guard. He had been to Speers’ Point to see some friends, and had spent an hour and a half watching White law training. He had five medium-sized glasses of beer, but was by no means drunk. He put his foot on the guard’s tucker tin, and apologised for doing so. He had not travelled in such carriages before.

Thomas Gould said that the defendant was not drank. There were other people drinking beer out of bottles in the carriage, and they were pretty jolly. Neither defendant nor witness took any part with them. Evidence was given by E. Hunter, and the case was dismissed.

On the 7 October 1916, Henry’s father received his meager belongings.

Private Henry Chadban (died of wounds) was 28 years of age, and a son of Mr. and Mrs. H. Chadban, of Stroud. He was educated at the Stroud Public School and afterwards worked in the Gloucester and Bellinger River districts as a timber-getter gaining a reputation as a wood chopper.

Deceased was a prominent member of the East Raleigh Football Club and was also a good cyclist, and the holder of several gold medals won at those sports. In 1912 he joined the police force and was stationed at Newcastle until war broke out when he enlisted with the 13th Battalion. Private Chadban was in 1913 awarded the Royal Humane Society’s certificate for life saving.

The late Private Henry Chadban, reported killed at the Dardanelles, was 28 years of age, and a son of Mr. and Mars. H. Chadban, of Stroud. In his youthful days, Private Chadban was working about Gloucester, and afterwards went to the Belinger River, where he was engaged in the timber industry.

In January, 1912, he joined the Police force in Sydney, and later went to Newcastle. He was a prominent footballer and sportsman generally, and held the certificate of the Royal Live Saving Society. Private Herbert Chadban, a brother, is in hospital in Malta.

Constable Harry Chadban, who, enlisted from Newcastle, where he was stationed for some months, died on August 13th of wounds received at the Dardanelles. His parents live at Stroud, and he was the first member of the Newcastle branch of the Australian Natives Association to be killed, although about thirty members have enlisted, a great many of whom are already at the front. At a meeting of the branch this week a special minute was passed appreciatively recording Mr. Chadban’s services, and the mortuary allowance of £20 was passed for payment to his next-of-kin.

Mr. C. H. Tonkin, the secretary of the branch, has formulated a scheme, which is to be considered at next meeting, whereby the members who are remaining at home will by special contribution keep those who have gone to the front financially good on the books during their absence. This scheme, which appears to be generally approved, will have the twofold effect of avoiding the need for the branch calling upon the ‘headquarters’ funds for the purpose, and of ensuring to members’ relatives the mortuary allowance of £20 in the event of them being killed or ensuring to members, in the event of injury, the full benefit of £1 1s per week for 52 weeks, and 5s per week for life should they be permanently incapacitated.

Whilst in Newcastle last week, the writer observed opposite the post office, in Hunter Street, a marble monument, erected in memory of the fallen of Newcastle. On ‘ Anzac Day ‘ the stone was covered with most beautiful wreaths; on looking over them, I discovered a magnificent wreath from the police of Newcastle to the late Pte. Chadban, of Stroud, who was in the police force at Newcastle at the time of enlisting. I was pleased to note that the police of Newcastle did not forget their comrade on that memorable day, who was so brave to give his life for King and country.

A beautiful marble honor roll, one of the finest of its kind, will be unveiled at the city police station on Wednesday night. The names are inscribed in gold lettering on a black marble scroll, and this is set on a white marble tablet. The roll faces the public entrance to the station, and at present it is draped with the Southern Cross. The words: ” Our Heroes, ” surrounded by a wreath of laurel in bas-relief, with the words ” Newcastle District Police Roll of Honor ” beneath the wreath, are chiselled into the head of the white tablet. At the bottom of the same tablet is chiselled the inscription, ” The Great War, 1914-19. ” So the police apparently believe that the war will conclude next year.

NEWCASTLE POLICE. ROLL OF HONOUR UNVEILED. A roll of honour to the members of the Newcastle police who have gone to the war was unveiled at the police station last night, in the presence of a very large muster of members of the force.

The officers present were: Superintendent Goulder, who has entered on leave of absence prior to retirement; Superintendent Childs, his successor; Inspectors Cook, Buzacott, Hood, and Hojel.  There were more than 40 police present.

On his return he rejoined the force, but had felt the call so strong that he had again resigned and enlisted. The names are inscribed on a scroll of black marble, which is mounted on a white polished panel, and surmounted with a white marble pediment richly carved, with a laurel wreath and the flags of the Empire and Australia. At the top is inscribed ” Our Heroes, ” and immediately below ” Newcastle District Police. ” Below the names are the words, ” For King and Country, ” and lower down, ” The Great War, 1914-19, ” space being left to fill in the year in which the war ends.

Superintendent Childs. who unveiled the roll, said it was with feelings of pleasure mingled with regret that he performed that function, pleasure because he felt proud of belonging to the same force as the men whose names were inscribed on the roll, and regret that four of them had laid down their lives, two in Gallipoli and two in France. When the Empire was in danger these men did not hesitate, but freely and voluntarily gave their services to their King and country. They had the satisfaction of knowing that the Empire was fighting for a righteous and just cause. He took that opportunity of mentioning that since the war began 158 members of the police force had enlisted, 40 had died on active service, 32 had returned, and 81 were still on military service. In addition, six clerks, who were attached to the Inspector-General’s Office, had enlisted. One of them died on the way to the front, another was invalided home, and the four others were still on active service. The Mayor briefly supported the remarks of Superintendent Childs, and paid a warm tribute to the patriotism of the men who had enlisted. He expressed his appreciation at being invited to take part in the function.

Superintendent Goulder said he felt it a great privilege to say a few words regarding their honoured comrades who had offered their lives on the altar of duty and patriotism. He always felt a thrill when he saw two or three soldiers who were voluntarily prepared to give their lives without any advantage whatever to themselves, apart from the satisfaction of knowing they had done their duty in the highest and fullest degree. ” I have always said ” added Superintendent Goulder, ” that military offenders who are going to the war, or have been, should not be treated in the same category as civilians guilty of similar minor offences. I would ask, as a special personal favour, if you have occasion to interfere with soldiers, do it as kindly and as charitably as you can, remembering the sacrifices they have made and the hardships they have suffered “.

In unveiling the roll, Superintendent Childs said he would apply words used by the Governor-General recently in unveiling a roll of honour, ” I unveil this roll to the honour of those connected with the Newcastle Police Force. I dedicate it to the glory of God, to the memory of those who have fallen, who have been wounded, who are returning to us, and who are about to serve in our renowned Australian Divisions. ” Inspector Cook paid a tribute to Constable J. Chandler, from whom the idea of having the memorial emanted, and who, once the superintendent’s permission was obtained, pushed the matter ahead with great energy. Constable Chandler expressed his pleasure at seeing such a large muster, and said when the movement was started the money was rapidly subscribed.

He rose responsive to his country’s Call

And gave for her his best, his life, his all.

He fell a hero in the deadly strife,

For, King and Country he laid down his life.

Inserted by his loving Mother and Father, Sisters and Brothers.

He gave his life for one and all.

Inserted by his loving father, mother, brothers and sisters.

From ‘The Sydney Sun”

The names on the roll are H. Chadban, F. M. Doonan, H. W. Hancock, T.  Connell, all of whom have made the supreme sacrifice, and C. W. J. Grant, D. J. Long, V. Dicre and S. Pender.   Many other Newcastle policemen volunteered for active service, but were rejected.