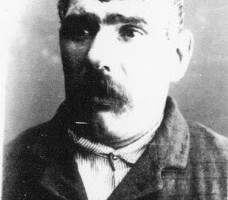 Police death in the course of duty
Senior Constable Henry Murrow (1869–1897) of No 4 Station died from an injury received on duty. Born in England, Murrow had settled with his parents in New Zealand where he joined the New Zealand Police Force before moving to Sydney and joining the NSW Police Force in 1883.

On 4 October 1897, Murrow, while on duty in The Rocks was hailed by Jane Jones, publican of the Orient Hotel who was having trouble with a drunken patron, Daniel Conway. Jones asked Murrow to move Conway along. This he did, requesting that Conway go home. Conway left with another man, walking south along George Street, closely followed by Murrow, as witnessed by George Howlett. Nearing the Port Jackson Hotel (now the Russell Hotel) on the corner of Globe Street, Conway’s companion was swearing, at which point Murrow overtook them and clasped his hand on the man’s shoulder. This resulted in a fight during which Murrow struck his head on the woodblock paving of George Street. Howlett intervened, helping Murrow to his feet. Conway then fled back towards Argyle Street and Howlett assisted Murrow to the nearby No 4 Police Station.

Murrow was escorted to Sydney Hospital where wound was dressed. It appeared to be minor so Murrow was dismissed. Meanwhile Conway was delivered into the custody of water police Constable William Cleugh who took him to the Water Police Station in Phillip Street where he was charged with assaulting Morrow while he was on duty.

At 10.30pm at his home at Paddington, Murrow lost consciousness and died around 12.30am. Doctors were summoned and determined that he had concussion, an autopsy confirmed it. Conway, was charged with murder but convicted on the lesser charge of manslaughter and sentenced to six months hard labour at Darlinghurst Gaol.[9]