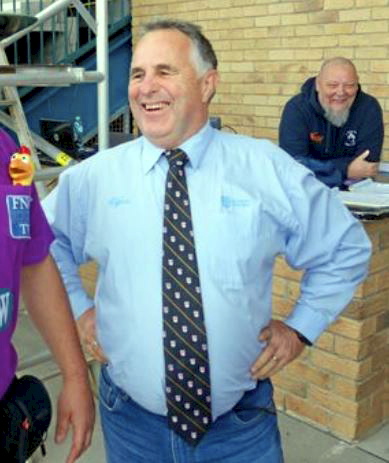 Ambulance crews were called to the grounds after Mr Hooper, 58, collapsed seven minutes into the senior reserve grade game between Lennox Head and Ballina.

While waiting for the ambulance to arrive qualified off-duty professionals from both clubs assisted immediately with first aid protocol and united in a community effort to keep Mr Hooper alive.

Current president of the Far North Coast Rugby Referees Association, Allan Thomas, said Mr Hooper stepped in to referee the game at late notice after another referee was unable make the appointment.

“The incident occurred very early into the first half where Hoops suffered a significant heart attack, they tried to resuscitate him, which they did,” he said.

“That just goes to show his devotion to the game, which was his passion and something he loved doing,” Mr Thomas said.

Mr Hooper, a former NSW Police officer in Sydney for more than 20 years, relocated to Georgica before joining the FNCRRA and becoming a life time member.

He is recognised by FNCRRA as a past President, current Chairman of Coaching & Grading, current Referee Appointments Officer, Referee, and Referee Coach for this Zone & NSWCRRA who helped mentor and develop Junior and Senior Referees over many years.

“Last year he gave that up so he could focus on the development and mentoring of junior and senior referees on the Far North Coast,” Mr Thomas said.

“Hooper has made an instrumental and massive contribution to the Far North Coast Referees Association and has left a big hole in our association.

“He was a very happy fellow and got on well with all his peers. He touched people’s lives and he will be sadly missed.

“He used to play rugby union in Sydney and I was told he was a very cheeky halfback. He was charismatic.

“From a zone’s perspective, he will be sorely missed as a friend, mentor, a coach, a referee and a devoted father and husband.

Long-term friend and fellow life member of the Far North Coast Rugby Union Referee Association, Stephen Miller, said Mr Hooper was not only imperative to the development of a strong referee group, but a family man who acted with the utmost integrity throughout his career.

“The conviction and devotion that he had for the country referee development program was remarkable,” he said.

“He was absolutely devoted to his partner Julie and his two boys Tom and Max.

“He was never a plain critic, but when he saw that something was wrong, he saw the opportunity for someone to right it.

“So good to work with, so dependable, so reliable.”

Mr Miller said Mr Hooper was a man who had his priorities straight and was always open to a glass of red wine and a few jokes.

Fellow member of the FNCRRA, Will Palmer said he was also an integral part of the Byron 7’s Carnival for years and co-ordinated the appointment of Referees from across Australia & Overseas.

“Without which the event couldn’t happen,” Mr Palmer said.

“Apart from being a cheeky half back in his Rugby playing days, Hoops also was a Police Officer for many years and made a valued and significant contribution to the citizens of NSW. He touched many people’s lives and will be sadly missed. RIP Hoops.”

A spokesperson from NSW Ambulance media said Mr Hooper was revived on the field by an off-duty officer before crews arrived to take him to Ballina hospital.