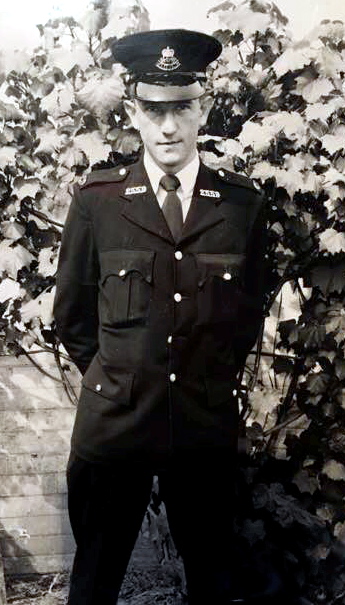 Greg Kelly‎ to Ex NSW Cops Who Want To Enjoy Their Time On FB.

August 16 at 5:02pm ·
I’m wondering if anyone can point me in the direction of getting one of these police caps. In 1989 I was approached by Ian Beckett in this photo below, who had become a fraud squad detective, resigned and was then the National Investigations Manager at NZI Insurance. Ian has been a friend and mentored me in civil and insurance law areas until his retirement. Ian passed away yesterday following a stroke about 12 days ago. His family would like to borrow one of these caps to place on his coffin for the funeral service next week. I S Beckett, RIP mate, always respected and respectful of Police and Fire Brigade officers, thanks for the many smiles, laughs and much guidance to this bloke over the last 28 years

????you will be missed especially by your wife Barb, kids Craig and Michelle, their families and your great grand kids.
https://www.facebook.com/search/str/ian%2Bbeckett/keywords_posts?esd=eyJlc2lkIjoiUzpfSTEyNDUyNTg5MDY6Vks6MTU2NzYyNTUyOTk2NjU5MiIsInBzaWQiOnsiMTI0NTI1ODkwNjoxNTY3NjI1NTI5OTY2NTkyIjoiVXpwZlNURXlORFV5TlRnNU1EWTZWa3M2TVRVMk56WXlOVFV5T1RrMk5qVTVNZz09IiwiMTI0NTI1ODkwNjoxNTY4NTI4Mzc5ODc2MzA3IjoiVXpwZlNURXlORFV5TlRnNU1EWTZWa3M2TVRVMk9EVXlPRE0zT1RnM05qTXdOdz09In0sImNyY3QiOiJ0ZXh0IiwiY3NpZCI6IjlmYzE2MTI5ZGE0MDA1ZGY1NGM0Mzc2MzcwM2Q1ZjEzIn0%3D
[divider_dotted]

If you contact William (‘Bill’) Purdon, an ex-Cadet and former Detective, who is now a practicing solicitor in Engadine, he may well have one of the old caps that you’re seeking to use at Ian’s funeral service. Bill has a small ‘museum’ of police memorabilia in his office, which includes some caps. I’m sure he’d be prepared to lend a cap for this purpose if he has one.