Other means of identification.

Other than the engraving or U/V pen marking of valuable items, two other methods of marking may be an option for tools, trailers and other solid or robust items. Both have been used by ‘industry’ for years.

1. The use of ‘steel marking stamps’ on hard steel or metal objects.
Stamping will result in an indented number which is difficult to hide or obscure. If the number is ground off, such grinding is quite evident (and obviously suspicious). If an identification number is ground off a metal object, scientific methods do exist which may restore it sufficiently for the original owner to identify it. 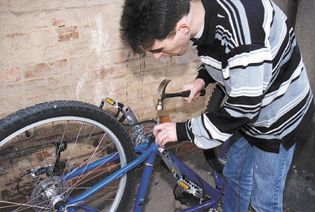 ‘A’ frames on trailers and other solid steel or metal objects can have an identification feature welded onto them. Such an identification marking will stand proud of the metal work and quite obvious. If such weld is ground off and then painted over, evidence of such grinding can be readily found, and again scientific methods exist which may restore the original weld feature.

Both methods are very useful because they both alter the structure of the metal of the object which cannot be deleted or changed by a thief. The main consideration would be what to stamp or weld onto the items in question. If the stamping or welding of the full license number is not be possible, due to the size of the objects being marked, then it is suggested that initials could be used.