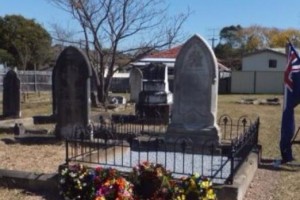 TERRIBLE TRAGEDY. A terrible tragedy was enacted this afternoon at Penrith. A coloured man, a stranger in the town, was observed by Sergeant Beatty to be throwing stones at passers-by. The officer warned him to desist, and was in the act of arresting him when he drew a knife and stabbed Beatty in the chest, the weapon going completely through his body. Beatty called out, and Constable Mosley came to his assistance, armed with a revolver. Mosley [Moseley]fired at the coloured man, who was in the act of running away, but missed. A second shot, however, took effect, and the fugitive reeled and was about to fall, when a young man named Zolliner [John Zahnliter] seized him. Both men rolled over on the street, and the coloured man drew the knife again and stabbed Zolliner. He was ultimately seized and taken to the lock-up. Sergeant Beatty, who is not expected to recover, has had his dying depositions taken. Zolliner’s wound is not serious.