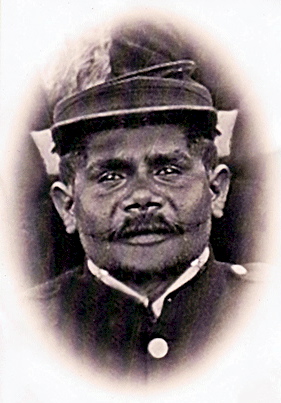 the First Wiradjuri black tracker with NSW Police in Mudgee. 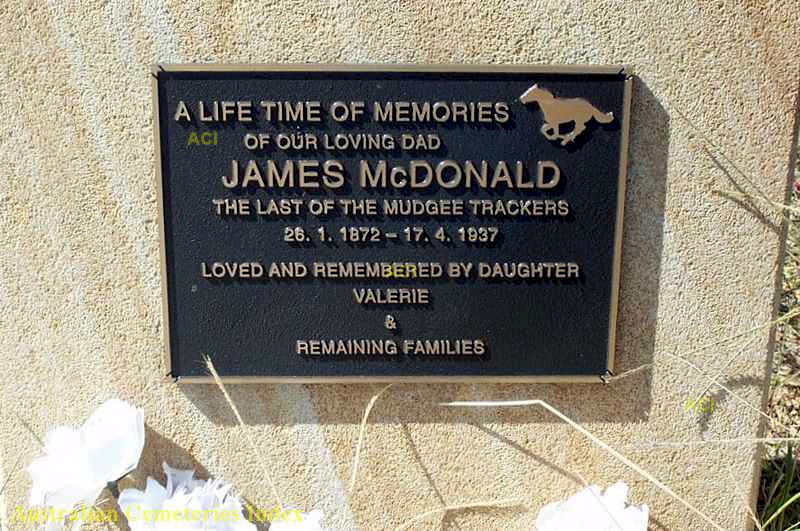 THE death of Mr. James Gillis McDonald (66), of Perry street. Mudgee, occurred on Friday night. The late Mr. McDonald, who had been a tracker in the police department for 40 years, passed away in his sleep. Born at Cobbora, he had lived in the Mudgee, Wollar, and Rylstone districts all his life.

In his younger days he was a noted athlete, boxer, and swimmer, and had won the famous Botany foot running handicap.

A well respected citizen, his passing will be mourned by many. A widow and eleven children survive.

The funeral was held yesterday afternoon, the interment being carried out in the Salvation Army portion of the Mudgee Cemetery by Messrs. J. C. Swords and Son.

The rites were conducted by Major Gibson.

Among those at the funeral were members of the local police force, who also acted as pall-bearers.

-Sixteen Defendants Before the Court.

The Rest Get Stiff Sentences.

An Object of Suspicion.

On Friday the Mudgee police received word that a burglary had been committed near Wellington, and a description of the bold bad men was sent here by wireless telegraphy or some other up-to-date means.

The local suppressors of crime and bad language were soon all alert, and on Friday evening Constable Tully and James Gillies McDonald, the well known tracker, had their cunning constabulary optics on a couple of strangers who had driven over from Wellington that day and were stopping at a local hotel.

The rules and regulation provide that a constable shall always act with caution, and therefore Constable Tully did not rush affairs but engaged a room at the hotel and, presumably, sat up all night with one eye on the back door and the other on the front.

The name of the unconscious object of constabulary cunning was Mr. W. V. Bradley, the representative of the Two Bays Nursery Co., Melbourne.

After consuming a very gratifying breakfast he strolled outside his hotel, and was accosted by a man who was a stranger to him, and asked him some tricky little questions as to who he was, where he came from, and where he contemplated going to. Mr. Bradley stated that he was going to the post office, and the stranger at once revealed his official identity, and intimated that the requirements of justice necessitated that the visitor should be searched, for he was suspected of being mixed up in a burglary near Wellington.

Mr. Bradley said he had not the least objection to being searched, and informed the constable that his Gladstone bag was upstairs and contained the usual assortment of clothes soiled and otherwise, and that he had £60 in notes in his pocket, and a fully loaded revolver, which he playfully introduced to the notice of the guardian of the peace.

Constable Tully carefully examined the socks, bicycling knickers, etc., and then sadly abandoned the case as far as Mr. Bradley was concerned. So far as we have heard the genuine desperado has not yet been arrested, but the police are keeping a very wide eye open.

Hi, My name is Jule and I am the great granddaughter of Jimmy McDonald. He was a tracker for the police and I am trying to find information on him.

I know he married Harriot Cooper. I do remember her but I would like to know where is is buried. Thank you  I really enjoyed reading your site too.  Jules.

I also think he had a police funeral – Jule.

Yes Jule. His family have also seen a photo of him in a NSW Police publication. they are finding out more information – editor.

Mickel Cowie answers: I don’t know anything about Tracker but have noticed that his name has been mentioned in a judgement re Warrabinga-Waradjurie that is accessable via Google using that as the search . Jules could read the judgement and contact the people  who have made the claim. Mickel

My name is Edwin McKenzie and I am the grandson of Jimmy ” Tracker ” McDonald and Harriet Cooper.  I’m 65 now, living in Cairns and moving to Brisbane at the end of June –  I would love to find out as much as I can about my family and descendents before I die.  I would appreciate any information or leads you can give me. Edwin McKenzie

Jimmy McDonald is also my Great Grand Father, my Grandmother (His daughter) Alice Valerie Honeysett (nee McDonald).  Jimmy is buried in Mudgee Cemetery in the Salvation Army section.  There is still family in the area.  The direct Children of Jimmy & Harriet McDonald are: Jimmy, Edie, Doobie, Davey, Jeanie, Donnie, Gertie, Valerie, Dawn, Malcolm McDonald 80 still living in Toronto. I have a photo of them all together which I would be happy to share if you wish.  Who are your parents, we must be cousins? Regards, Marina Honeysett

Answering Jules re Jimmy McDonald – he is buried in the Salvation Army section of Mudgee cemetery Row B Plot 50. (unmarked still I think) He lived at 13 Perry St where the RTA now stands and was the last tracker at Wollar between about 1906 to 1919 living there in the trackers hut, then at Rylstone. his obituary.  – Anonymous

20/4/1937 (mon) Death – Mr J G McDonald – The death occurred of Mr James Gillis McDonald (66) of Perry St. Mudgee occurred on Friday night. The late Mr McDonald who had been a tracker in the police dept. for 40 years, passed away in his sleep. Born at Cobbora he had lived in the Mudgee, Wollar and Rylstone districts all his life. In his younger days he was a noted athlete, boxer, and swimmer and had won the famous Botany foot-running handicap. A well respected citizen, his passing will be mourned by many. A widow & eleven children survive. Funeral took place Salvation Army section Mudgee cem. Among those at the funeral were members of the local police force, who also acted as pall bearers.

Dear Diane, thanks for your email and yes I do have that information. James is buried in the Salvation Army section of the Mudgee cemetery and he has a plaque which was put there by his daughter Valerie . It is available on the Mudgee cemetery website.

Please pass on email address to Jule , I too am a great grand daughter of Jim McDonald. His son James Henry Crawford McDonald is my grandfather Tanya Scrivener

My name is Edwin McKenzie and I am the grandson of Jimmy “Tracker” McDonald and Harriet Cooper.  I’m 65 now, living in Cairns and moving to Brisbane at the end of June –  I would love to find out as much as I can about my family and decendents before I die.  i would appreciate any information or leads you can give me.

Thank you for your great site . Thanks to you I have found more relatives and some I didn’t know I had And I plan to catch up with all of them Congrats on a great site  Jule

Around the Black Stump.

His mother being Eliza McNabb, and his father Thomas McDonald, who was employed by James Falconer as a shepherd.

After his wife’s death Thomas McDonald went to Queensland, leaving his young son James with the Falconers. He was reared by the Falconers growing up with their children Mark & Mary.

Sergeant Buckley of Rylstone, his reputation began the day he arrived, for he had brought his milking cow with him.

During the trip the cow produced twin calves, one of which he gave to his tracker Jimmy McDonald, who owned a rogue cow.

Jimmys cow was the terror of the town and was nothing short of a blooming menace, always breaking into everyone’s garden. Yet she fulfilled a much needed role by providing milk for Jimmys extensive brood.

Although Jimmy was a full blood Aborigine his wife was not, and their twelve happy children came in varied colours.  Jim could see the humour when he chuckled, with my kiddies, it’s never any use killing a fowl, it would have to be a centipede because everyone begs for a leg.

NSW Aboriginal Trackers James McDonald was the tracker at Wollarah when the Governor brother were on the run. He lived in a four room hut in the police paddock. James knew Jimmy and didn’t shoot him when he had the chance.

Jimmy once fired a warning shot at James which struck his saddle, the children later played with saddle when growing up.

Mudgee Jimmy Mack and others.

Jimmy Mack and others.

Wages for black trackers varied from four to seven pounds a month.

Police tracker James McDonald stationed at Wollar, who has been doing police duty at Gulgong. Whilst sweeping the yard at the police station here a few days since, picked up a nice nugget of gold , weighing ?? wts.

Police tracker McDonald, for many years stationed at Wollarah, who recently retired from the service, has it will be learnt with satisfaction rejoined it. Tracker McDonald will resume duty on July 10th. He will be stationed at Rylstone, which will henceforth be the tracker station and depot for the Mudgee Police District.

The late Mr McDonald who had been a tracker in the police Dept. for 40 years passed away in his sleep.

Born at Cobbora, he lived in the Mudgee, Wollarah & Rylstone district all his life.

In his young days he was a noted athlete, Boxer, swimmer and he won the famous Botany foot running handicap.

A well respected citizen, his passing will be mourned by many.

Funeral Salvation Army section of Mudgee cemetery. Many at the funeral were members of the local police force, who acted as pall bearers.

Information from Jeannette Evans, ( on 12 March 2021 ), granddaughter of Tracker McDonald, says that the family have a letter, written by Jeff Falconer, whose family raised Tracker McDonald, and the letter states that Tracker McDonald was given a lifelong job by the Governor after saving two small girls from a bolting horse.

Hi
I am the granddaughter of James and Harriet McDonald my father was Malcom McDonald. My father passed away Jan 2017. He was the youngest child. My father always told me there 13 children in his family. Before my father died we had long conversations about his mother and father family and life growing in Mudgee. I would like to connect with any relatives.
My birth name was Lisa Gay McDonald my parents separated when I was 5yrs old and my step father adopted me so my family name changed.

Error in above info letter written by Mark Falconer not Jeff

I’m the granddaughter of James Gillis McDonald my father was James Henry Crawford McDonald . The family have lots of information of his life in Mudgee Rylstone Wollar area .He was a well respected black Tracker .
Jeannette Evans

Hi I am great granddaughter of James Gillis McDonald.

My grandmother was Gertrude and my father Ronald Gillis. Have made contact with a few cousins but would like to meet others.

If you are related to my great grandfather please make contact.