In 2000 the regional dog units were combined into the one NSW Police Dog Squad with HQ being at Menai.

Does NOT appear on Australian Honours system

Cause:  Heart attack at home

Full Medals to be worn.  Funeral will finish at 11.30am.  “Debrief” will be held at Cronulla Leagues Club – downstairs.  461 Captain Cook Dr, Woolooware.  Buy your own food and drinks. 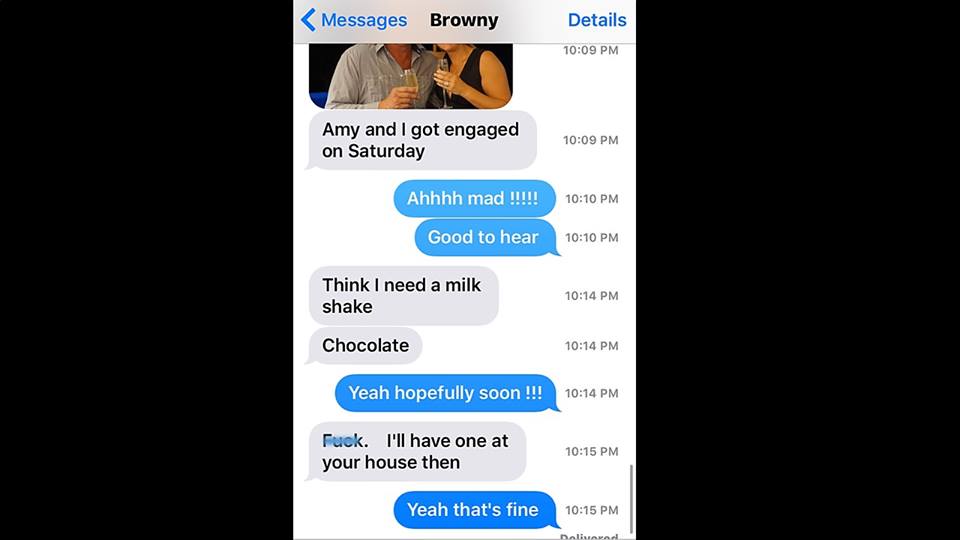 Jeff and his mate ‘Shadow’ 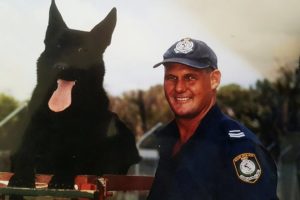 Our deepest condolences to the family, fiancée and son, William ( only 2 years old ) on the loss of Browny.  Condolences also to Ashleigh ( 27 old ), Browny’s daughter from his first marriage and also to his granddaughter – Natty ( Natasha ) – daughter to Ashleigh.  There has been nothing but praise for this man and who he was and what he stood for during his time with NSWPF.

Sudden death: Couple’s happiness snatched away in a heartbeat

IT was meant to be the happiest weekend of their lives — a surprise engagement followed by a celebration with family and friends.

But by the next day Jeff Brown was dead, leaving behind a devastated Amy Turbill and the couple’s two-year-old son William.

“In 48 hours I went from thinking we were going to be planning a wedding to planning his funeral. It was surreal,” Ms Turbill, 38, said.

“All the dreams you have for each other are suddenly gone.”

Mr Brown, a decorated and well-­respected former NSW police officer, died suddenly in his sleep from heart failure in the early hours of October 31, less than two days after proposing to his partner on a surprise getaway on the NSW south coast.

The pair had been staying at a Bannisters Beach resort at Mollymook when Mr Brown popped the question beside the pool, presenting his overwhelmed fiancee with a spectacular diamond engagement ring.

“He took me away for the weekend and wouldn’t tell me where we were going,” Ms Turbill said. “He never did things in halves, so of course the ring is huge.”

The 50-year-old, known as “Browny” to his mates, retired from the force for medical reasons in 2011 after 25 years as a police officer, ­including 16 years as a general purpose dog squad officer, where he was on the front line of the Cronulla and Macquarie Fields riots in 2005.

Ms Turbill, also a former NSW police officer who met her fiancee on the job, said he was “larger than life”.

“He was so brave. You have to be brave in the dog squad but he was the first person to stand up and be in front,” she said.

“So many people have said to me the Macquarie Field riots was one of the scariest things they went through, but when he stood in front of them, they never felt safer, because he was there. His proudest achievement was his dogs.

“He trained them so well and cared for them so much.”

Ms Turbill said Mr Brown had two police dogs throughout his career, ­including veteran dog Buzz, who ­retired with his handler and still lives at their Engadine home.

Before Mr Brown’s early retirement he had also trained a new dog named Chuck, which went on to help track down double murderer Malcolm Naden with his new handler Luke Warburton in 2012.

But Ms Turbill said when he was off duty, Mr Brown was just a loveable larrikin, a keen surfer, an avid sports fan and a devoted father to their young son and Mr Brown’s 27-year-old daughter Ashleigh.

“He was such a special person, everyone who met him just gravitated towards him,” Ms Turbill said. “He had such a generous spirit and such a zest for life. And a wicked sense of humour.

“It blew my mind how many people he was genuinely friends with. There were close to 400 people at the funeral. I was always so proud to be with him.”

Despite the pair meeting at work in 2002 and forming a close friendship, they did not start dating until just over four years ago, before having their son in 2014.

They had planned to move to a property in Port Macquarie early next year before planning the wedding.

“He used to tease that it took him 10 years to get me to say yes to a date,” she said. “We had an amazing love. An intense love. A once-in-a-lifetime love. One that will last my lifetime.’

Its still hard to believe you have left us Browny.

You were one of those genuine mates, whom you could count on your hand.

Until we all meet again Pal…

Rest in peace my friend.

Thinking of your loved ones in these testing times.

How tragic for this poor family, hopefully he didn’t suffer.