He Resigned from NSWPF as of 9 November 1968

Discharged Medically Unfit as of 13 May 1976

Police Awards:  No find on It’s An Honour

I can’t find John in the 1979 or 1989 issues of the Police Stud Books but the registered numbers fall within the dates – as above.

John was former Liverpool (22 Division). In 1973 John was riding home from work on his motorbike when he was involved in a car accident.

John suffered severe head injuries and I vividly recall us driving his wife to visit him at Lidcombe when he was in re-hab. John never recovered from his brain injury.

I also remember John visiting us at the SWOS office.

Prior to the accident John was an extremely fit fella and from memory was previously an Army P.T.I.

From Steve Reeves: His photo in his Boxing gear was displayed in the foyer of the South Sydney Police Boys Club. He is a Vietnam Veteran. A distinguished gentleman who was always immaculately dressed. John was on his way home from work along Elizabeth Drive and when at the intersection of Flowerdale Road a car turned right in front of him. Tragedy. He used to train his children on the grass athletic track alongside Cabramatta Sports Ground. We worked together in the Court Cells at Liverpool. RIP mate.

John was, apparently, a regular visitor to the Redfern Police Academy and Mounted Unit.

VALE
219046 CPL John Henry HEAD
31 March 1942 – 10 August 2017
Aged 75 Years
Sadly, John HEAD passed away after a long illness caused by a motorcycle
accident many years ago.   John was a NSW Policeman who joined the Army
because he was to old for National Service and wanted to serve his country
in Vietnam.   Because of his police background, John was a direct enlistment
into RACMP and served in Vietnam from May 1970 till May 1971.   On
completion of his six year engagement, John took his discharge and returned
to the NSW Police Force.   During his Police service, John was involved in an
horrific motor cycle accident which resulted in him having to retire from all
forms of employment.
John was a well respected and well liked member of RACMP and of the
NSW Police Force.   He was and will always be remembered as a top bloke.
LEST WE FORGET
Funeral Details.                   1100 hrs, Friday 18 August 2017
North Chapel
Forest Lawn Memorial Gardens
Camden Valley Way
Leppington   NSW
Condolences to :                    Jackie Doulis   (Daughter)
739 Duncans Creek Road
Duncans Creek   NSW   2340

When joining NSW Police Force in 1961, John was described as being 5′ 10″ tall, 11 stone 6 lb with blue eyes, brown hair and medium complexion.

Prior to joining “the job” he was a labourer for 2 years 2 months, a Garage attendant for 3 months and shop assistant for 9 months.

He Passed his Constable 1st Class exam on 22 September 1964.

He was Roman Catholic.

The following note was recorded on his Service Register:

Commended for his good Policemanship whist off duty on 1st February 1962, when on entering a Milk Bar in Crown Street, Surry Hills, he overheard a man named Paul Wishart inform tow youths he had bought a wireless set cheap from an unknown person and he believed it was stolen.  The Probationary Constable then questioned Wishart who subsequently accompanied the Probationary Constable to No. 21 Division Headquarters.  Wishart was later charged with having a transistor wireless set in his possession reasonably suspected of being stolen or unlawfully obtained, and convicted.

He returned just under 1 stone heavier, at 12 stone 5 lb and was still married.

On the 15 September 1972 he passed his General Duty Cars & Utilities / Light Trucks course at the Drive Training Centre. 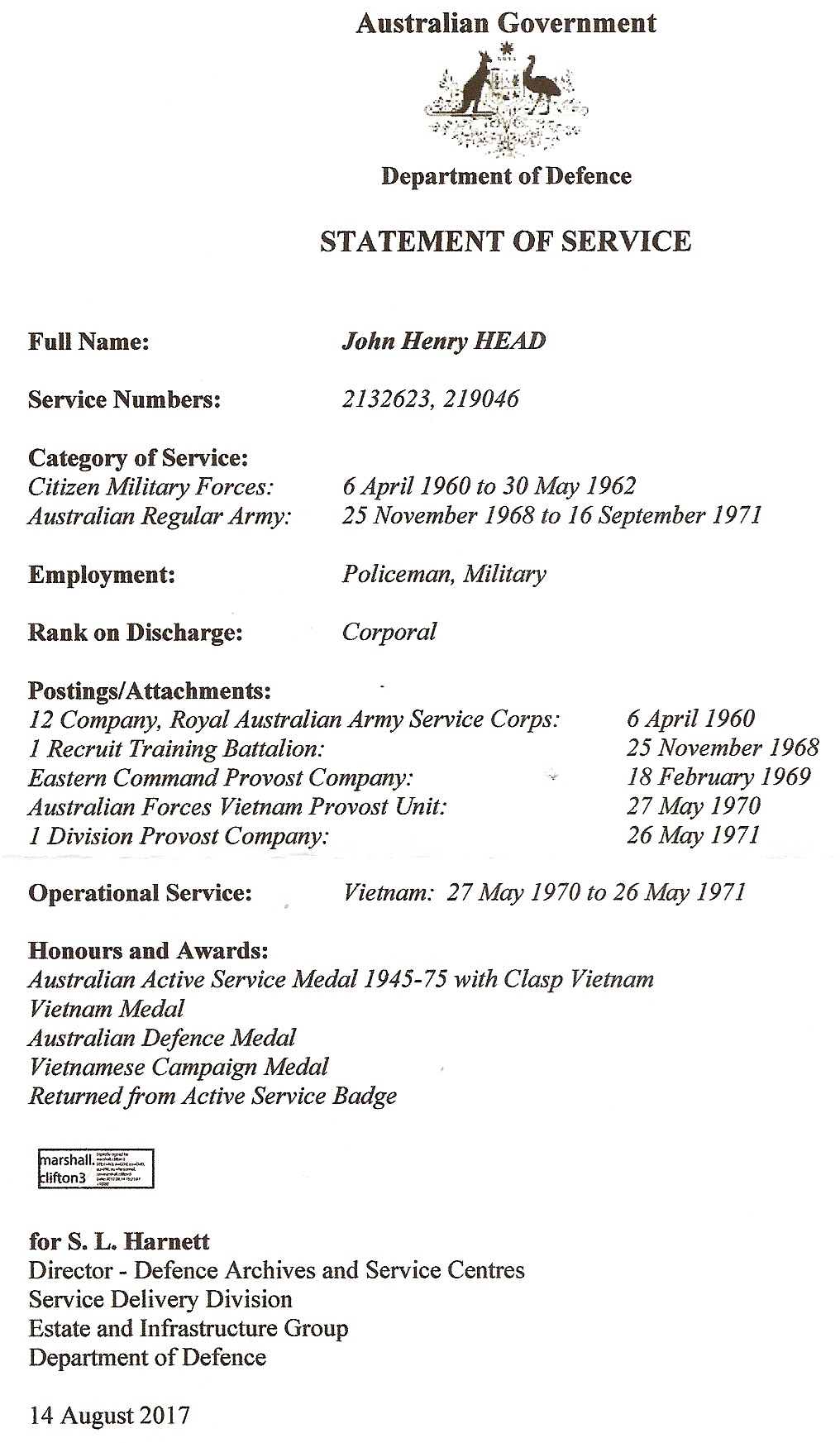