Intelligence was received on Saturday morning last, at the Detective Office, that on the preceding Thursday, the 16th inst., two of the mounted police force, Sergeant [John] McNally and Constable Moore, proceeded at seven o’clock on the night in question to a tent believed to be occupied by the notorious William Turner, alias Gipsy Smith, who stands charged with various acts of highway robbery, and with dismounting a constable from his horse near Castlemaine several months ago, and with escaping from custody.

On approaching the tent, the officers recognised Turner, who attempted to make his escape. The officers immediately closed with him, and, during the struggle, shots were fired from the tent, one of which entered the breast of Sergeant McNally, who fell dead on the spot. Several other shots were fired, and wounded the constable (Moore) severely in the face and other parts of the body.

As soon as the intelligence reached the Camp at Mount Ararat, the police went in search of the bushrangers, who, however, succeeded in eluding their vigilance. A woman was arrested in the tent. An active search is in progress, and it is thought the criminals cannot long escape detection. The gang, supposed to be under the leadership of Turner, is, without doubt, the same as that which committed the late daring acts of bushranging near Moliagul. 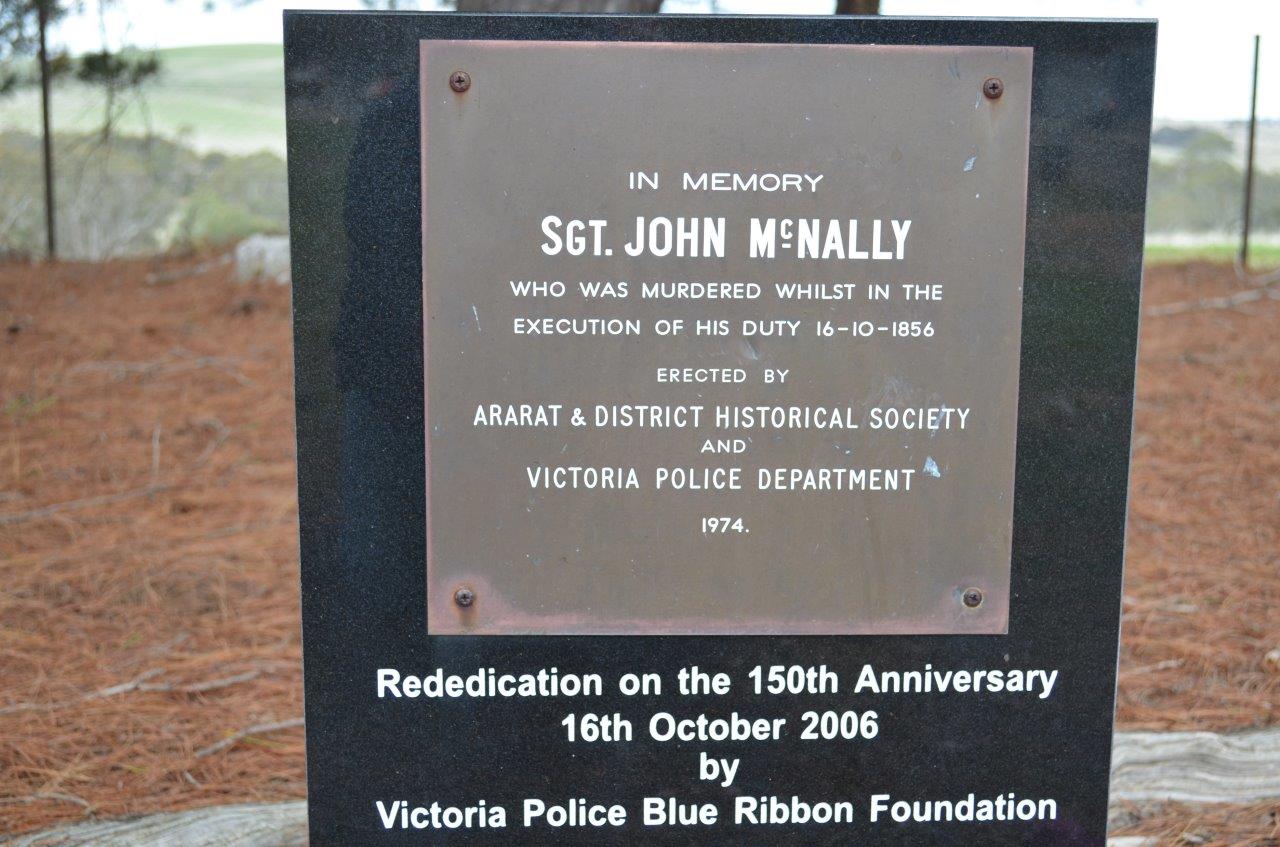 Sergeant John McNally became the first member of the Victoria Police to be feloniously slain in the line of duty when he was murdered at the Cathcart diggings on 16th October, 1856.

Whilst trying to arrest a suspect (Gypsy Smith) over a string of armed robberies, an associate of the suspect intervened and fired his shotgun, killing Sergeant McNally and seriously injuring his partner, Constable John Moore. The two offenders then made their escape. Seven days later, the pair were arrested near Amherst and charged with the murder of McNally. One of the offenders was hanged in 1857 and the other received a sentence of fifteen years hard labour.

The offender, William Smith (Gypsy Smith) was transported to Botany Bay at the age of 15 for stealing a handkerchief. He went on to become a hardened bush ranger who, between the years of 1852 and 1856, became the notorious ‘Gypsy Smith’, a subject of fascination for the newspapers and police as he and his gang of desperate convicts created fear among the gold diggings of Victoria.

Sergeant McNally is buried in Cathcart Cemetery on a hill known as McNally’ Hill. The Cemetery is in a natural bushland setting and is very well maintained.

The emergency department at Ararat Hospital is known as the John McNally Emergency Department.

Cathcart is approx. 4.6 km from Ararat and is approx. 345 m above sea level. There is no town at Cathcart, it is only an area. It was a large attraction for Gold Miners in the early 1800′s.  People from England, Ireland, Scotland, America, Switzerland, Germany, France, Russia and China descended on Cathcart to look for gold. Also many other from Australia took their families there as well.

There were many stories about horse thieves and murderers in the old days and these were dealt with tough justice by a self-established vigilante committee.
After the first rush the lead was lost and most miners moved on to other diggings except one of the original party J. P. Rodd who was in partnership with an American Negro Richard Davis (alias Black Harry). They traced the gold deeper and hit another lead calling it Blackman Lead. This attracted 3,000 diggers to the area, other leads were discovered each causing a new rush of miners.
The general area became known as Cathcart and with time the name was given to the Township where stores, school, hall and hotels had sprung up. There were many tents and lean-to shanties.
Today there is little evidence of the hustle and bustle of the frenzied gold diggers and their lively community of dreamers. Except maybe the Cemetery, which is on the Ararat- Pomonal Rd. 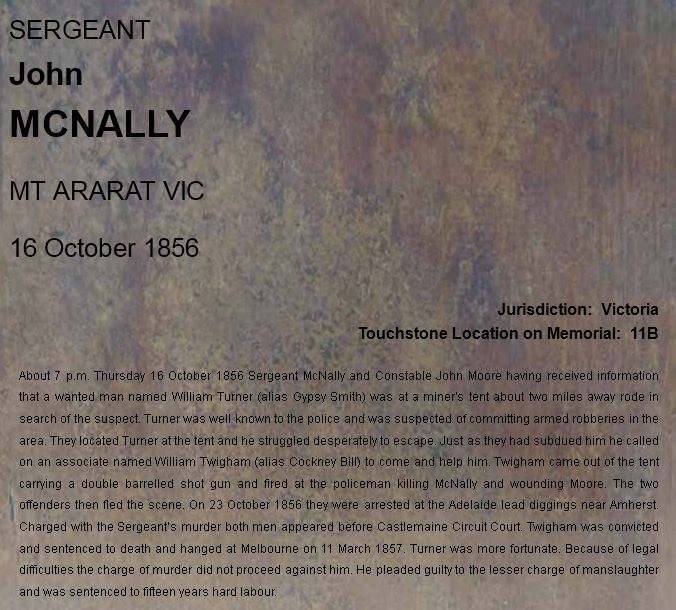 Sergeant John McNally:  The system of registered number for police hadn’t been introduced when Sergeant John McNally was murdered on the Mt Ararat goldfield in 1856.  He had joined the Victoria Police Force the previous year after service with the Royal Irish Constabulary.

On October 16, 1856 Sergeant McNally and Constable John Moore where told that William Turner, a wanted robber was staying in a tent in a camp about two miles away.  Turner tired to flee but the police wrestled him to the ground.  Turner called for help from his associate, William Twigham.  Also known as Cockney Bill, Twigham came out of the tent armed with a double-barrelled shotgun.  He fired, killing Sergeant McNally and wounding Constable Moore.

Turner and Twigham escaped and a reward of  £400 was offered for their arrest.  They were arrested a week later at the Adelaide diggings after being recognised by a shopkeeper.

After a trial held at Castlemaine, Twigham was convicted of murder and sentenced to death.  he was hanged at the Melbourne Gaol on March 11, 1857.

Turner pleaded guilty to the lesser charge of manslaughter and was sentenced to 15 years hard labour on the roads and other public works.

ARARAT – A book chronicling the life and times of the man responsible for the murder of police sergeant John McNally in 1856 is nearing completion.

The text, which is yet to be titled, tells the story of William Sydenham Smith and how his life of crime led to him crossing paths with Sergeant McNally.

Sergeant McNally was the first member of the Victorian Police force to be slain in the line of duty.

The research team of Marion McAdie, Greg Vivian, and Ian Batty along with author Laurie Moore have spent over 12 months on the book.

Mrs McAdie said she along with the genealogical society wanted to find the facts surrounding the murder of Sergeant McNally.

“Unfortunately, after much research we still know little about McNally or his partner Constable John Moore, who was wounded in the same incident,” she said.

The book uses Smith’s history to provide a broader context to the death of McNally.

“Like the public perception of most Australian bush rangers, Smith comes across in most accounts as a one-dimensional person,” Mrs McAdie said.

“His origins from England as a transported convict at the age of fifteen, his brutal treatment for minor misdemeanours at the hands of a ruthless system, his heroism in saving lives during his imprisonment, and his eventual participation as a free man in colonial New South Wales and Victoria, have never been mentioned before.

“As in many cases of murder by bush rangers, the victim hardly rates a mention and we hope that this book may help recognise the heroism and positive contributions made by the early police on the goldfields.”

Mrs McAdie said she believes it is an important story because it tells of how a young William Smith was transported to Botany Bay at the age of 15 for stealing a handkerchief.

“It traces his experiences as a convict around Sydney, Norfolk Island and Tasmania before he escaped in a whale boat from Tasmania,” she said.

The book goes on to show how the young boy became a hardened bush ranger who, between the years of 1852 and 1856, became the notorious ‘Gypsey Smith’, a subject of fascination for the newspapers and police as he and his gang of desperate convicts created fear among the gold diggings of Victoria.

The story culminates in the events at Cathcart diggings on October 16, 1856 when the bush rangers were confronted by Sergeant McNally and Constable Moore, leaving one dead and the other wounded.

“After the eventual capture of the bush rangers near Maryborough, Smith’s mate was hanged but a strange fate awaited Smith, and this is detailed in the forthcoming book,” Mrs McAdie said.

Although the story revolves around a bush ranger, it is set among the goldfields of 1850s’ Victoria.

It touches on the lives of many ordinary people, the legal system, the squatters, and the impacts of convicts who came in large numbers to look for gold and rob and terrorise the infant community.

“It is a good read and one that is set in Sydney, Norfolk Island, Tasmania, Melbourne, Yackandandah, Moliagul, Maryborough, Amherst, Beaufort, Ararat, Cathcart and Hay in New South Wales,” Mrs McAdie said.

The book’s author, Laurie Moore retired from Sydney to live in Western Victoria thirteen years ago.

It told the story of the last declared outlaw in Australia, Jimmy Governor, who was the fictional character, Jimmie Blacksmith, in the book written by Thomas Keneally.

Since then he has written ‘Shot for Gold’, a bush ranging story that happened near Smythesdale, a draft for a book on the Clark Gang of Braidwood, and has now put together the history of the killing of the policeman, Sergeant John McNally, and the convict and bush ranging events that led to his death in October 1856 at Cathcart.

Mrs McAdie said despite all the hours of research the team still can’t place an exact location of the burial site of sergeant McNally.

“We would love to hear from people about the exact location,” she said.

“We think the site is located in the north west corner of the now Cathcart cemetery.”

The team hope to have the book finished by the 157th anniversary of the event on October 16 this year.

Plaque at gravesite commemorates Police Sergeant John Mc Nally who was murdered whilst on duty in October 1854.

Sergeant John McNally became the first member of Victoria Police to be feloniously slain in the line of duty when he was murdered at the Mt Ararat goldfields on 16th October, 1856. Whilst trying to arrest a suspect over a string of armed robberies an associate of the suspect intervened and fired his shotgun, killing Sergeant McNally and seriously injuring his partner, Constable John Moore. The two offenders then made their escape. Seven days later, the pair were arrested near Amherst and charged with the murder of McNally. One of the offenders was hanged in 1857 and the other received a sentence of fifteen years hard labour.

Front Inscription
In memory Sgt. John McNally who was murdered whilst in the execution of his duty 16-10-1854. Erected by Victoria Police Department 1974.

With substantial donations from the Victoria Police Blue Ribbon Foundation the Ararat Hospital was able to purchase an image intensifier for its surgical department and new X-Ray equipment for the Medical Imaging Unit. This was a joint project between the Blue Ribbon Foundation and the local community through the Ararat Branch and was dedicated as a Police Memorial in memory of Sergeant John McNally who was murdered at the Mt Ararat Goldfields in 1856.

In 2003 works commenced on a complete redevelopment of the Ararat Hospital and the Victoria Police Blue Ribbon Foundation was able to contribute to the re-building of the emergency department. This was completed as a joint project in partnership with the local community through the Ararat Barnch of the Blue Ribbon Foundation. Today the Ararat Hospital Emergency Department can provide state of the art emergency & trauma care to the people of Ararat and surrounding districts. This project, commissioned as a Police Memorial in May 2004, was the first stage in a continuing relationship with the community of Ararat and their public hospital.

Sergeant John McNally became the first member of Victoria Police to be feloniously slain in the line of duty when he was murdered at the Mt Ararat goldfields on 16th October, 1856. Whilst trying to arrest a suspect over a string of armed robberies an associate of the suspect intervened and fired his shotgun, killing Sergeant McNally and seriously injuring his partner, Constable John Moore. Sergeant McNally’s sacrifice is acknowledged through this an other projects installed at the Ararat Hospital.