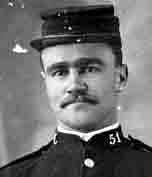 Molly Hunt
2019  NSW Fallen Police FB Group
The headstone for Constable John Woods is at the top end of the Old Police paddock, (don’t know who might own it now), which faces Roseberry Street, just off the junction of Dalmorton Street ( Woodenbong, NSW ).
His listed cause of death was Rheumatic Fever at age 29 on 21-2-1893. (The Warwick Argus, Tuesday 28-Feb. 1893)
He was the first Constable appointed to Woodenbong in 1887.
He married Sarah Margaret Fletcher at Killarney, Qld on the 22-Nov. 1892.
His Parents were John & Eliza Woods.

A native of N.S.W., was single when he joined the Police and was previously employed as a farmer.

Woodenbong Police Station was in existence by 1888 as recorded in the NSW Legislative Assembly Distribution of Police Force on 31st December 1888.

In 2006 the Woodenbong Police Station was located in the Richmond Local Area Command in the Northern Region. Its address was Unumgar Street, Woodenbong. (1)Endnotes(1) NSW Police Website http://www.police.nsw.gov.au/about_us/structure/operations_command/local_area_commands/northern_region/richmond (accessed 30 October 2006).