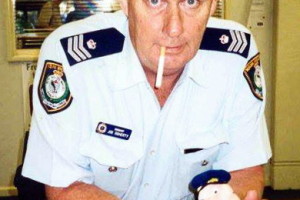 Sgt Joe Doherty ( a real nice bloke ) was stationed at Helensburgh Police Station, as the OIC, for years, until around 1999 when he was transferred to The Rocks Police Station, Sydney.

Note from Gordon Kelly ( whom I don’t know )

Joe Doherty. Died aged 54. He was a proud supporter of not Canterbury but.. “The Berries”. Joe knew he was not going to beat the cancer & organised the pall bearers for his funeral by asking them personally before he finished up at work. I was one asked to do this & I’m still proud of that. He was a great bloke & is missed by many in his blue family I am sure.