( Late of Fairlight and recently of Kokoda House at the War Veterans’ RSL Village, Narrabeen. ) 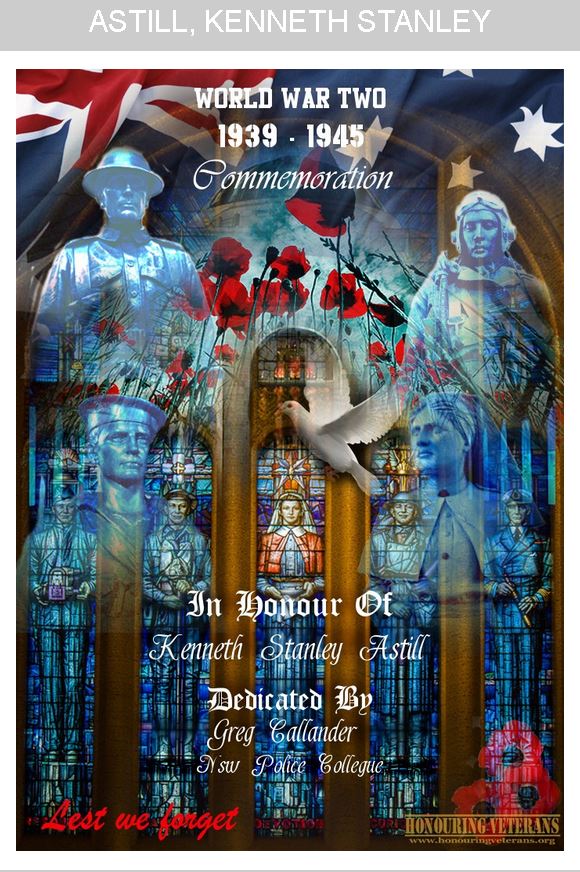 Army records have him born same day / month but in 1920

In lieu of flowers, please consider a donation to NSW Police Legacy.

Passed away peacefully in his sleep. Late of Fairlight and recently of Kokoda House at the War Veterans’ RSL Village, Narrabeen.

Loving father of Julie, Debra and Ian, father-in-law to Phillip and grandfather and great-grandfather to their families.

Ken’s family would like to thank the wonderful staff at Kokoda House for their kindness and compassion shown to him.

In lieu of flowers, please consider a donation to NSW Police Legacy.

Published in The Sydney Morning Herald on July 2, 2016

MORE than 20 retired police officers were awarded the National Police Service Medal at the War Vets Village at Collaroy Plateau on Wednesday, including one officer – 1980’s – who retired 30 years ago.

Former officer Bill Bush, who retired in 1998, said the Retired Police Association had lobbied the State Government for some time for a medal to be awarded to officers who had served the community well.
“We eventually convinced the Government that retired cops who served with distinction should be awarded these medals for their contribution to society,” Mr Bush said.
The National Police Service Medal is a special service award within the Australian honours system to provide “recognition for the unique contribution and significant commitment of those persons who have given ethical and diligent service as a sworn member of an Australian police service”.
Northern Beaches local area commander Superintendent Dave Darcy presented the medals.
Mr Bush said this was the first occasion the medals had been awarded to retired officers on the northern beaches but expects further award ceremonies in the future due to the number of retired police officers living in the area.

> Hello Warren and Phyllis,
>
> I am not sure if there is a connection with my husband’s Uncle Jim
> Noonan’s
> family (now deceased).
>
>>
> Also, my husband’s family had a good friend by the name of Kenny ASTILL.
> He was a Detective in the NSW Drug Squad in the 1950s 1960s. Kenneth Stanley ASTILL married Norma May WEEKS in 1952 and the marriage was registered in BURWOOD. The family lived at Stanmore and later were living in Manly.
>
> Regards,
> Janice

Addict ” lucky to be alive “

SYDNEY, Wednesday. — A magistrate told a drug addict today that he was lucky he had been taken to hospital and not to the morgue.

The addict, Leigh Francis Caines, 24, formerly of the Lithgow area, appeared in Central Court on charges of administering heroin to himself and possessing indian hemp.

The court was told that Caines had taken “a massive dose” of heroin, at least 10 grains.

Detective Sergeant Ken Astill, of the CIB drug squad, had said Caines had been found unconscious in a locked toilet after injecting himself with the dose.

When told that the defendant had spent two days in hospital, Mr W. Lewer. SM. said, ” You just missed getting into the morgue “.

Mr Lewer felt that what Sydney lacked most of all was a lock-up hospital.

He remanded Caines in custody until October 21 ordering that a psychiatric report be completed.

IT is hereby notified that Detective Sergeant 1st Class Kenneth Stanley Astill has been appointed as ex-officio member of the Poisons Advisory Committee, vice Inspector C. R. Abbott, resigned, as the nominee of the Commissioner of Police.

( bottom paragraph in second column of p 11 )……In the large office occupied by Detective Sergeant Ken Astill, chief of the Drug Squad at the CIB, there’s a baby’s feeding bottle – complete with teat. But a hole has been drilled at one end of it and a pipe bowl fitted into it. The drug addict (sic) who once owned it used to put his ‘pot’ into the bowl, light it. shove the teat in his mouth and suck as eagerly as any baby.

…………  Ken Astill, from Sydney was also a guest. He is Australia’s foremost collector of police memorabilia and badges and a life member of the Police Insignia Collectors of Australia, and of the Police Historical Society. ……….

Thank you very much for letting me know of Ken Astill’s passing.  Ken was a friend of the Doughty family, through my uncle Jack Doughty, who for many years was a serving Police Officer at Coolabah.

Many years ago when I was a teenager, Ken, Jack, the Doughty brothers and myself, went on many pig shooting expeditions around Coolabah. I am attaching a photograph of Ken taken with my Uncle Bob Doughty and also a photograph of the Doughty family at the back of the Police Station at Coolabah.

When Uncle Jack retired be and his wife Joan, lived at the back of Manly Lighting on Pittwater Road in Manly, where Joan worked as the company’s Bookkeeper.

Jack passed away in 2006 in Manly Waters Private Hospital aged 81.

35 years ago I was a junior trainee at the Drug Squad where Ken was the 2IC to Mr. Lawrence. I was fortunate that he took the time to take me under his wing, being extremely helpful, knowledgeable and a great bloke who I had a lot of respect for. I acquired some of his work library as he approached retirement, and yes, each of the books contained his personal stamp. May he rest in peace.

[…] you very much for letting me know of Ken Astill’s passing.  Ken was a friend of the Doughty family, through my uncle Jack Doughty, who for many […]