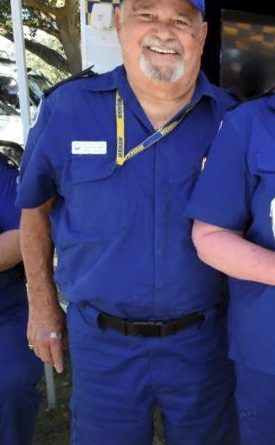 Future Wake location:  ( Due to current Govt. restrictions of 2 persons only at ‘Gatherings’,  there won’t be an immediate Wake )

At the time of publication, I have no further information about this mans life after he left NSWPF.

The Crowdy Harrington unit thanked Bek for all her hard work over the last 18 months as unit commander and wish her all the very best in future endeavours.

The unit also congratulated Leon and Cheryl in obtaining their new positions and wished them every success in their new roles.

It’s out with the old and in with the new. Crowdy Harrington Marine Rescue has welcomed two, new emergency vehicles to their ranks on the back of a grant and fundraising efforts.

The organisation received $72,000 from the Emergency Volunteer Support Scheme that was put towards the purchase of the vehicles.

Further fundraising efforts completed the purchase and ensured the vehicles could be fitted with required accessories such as a toolbox, canopy, roof racks, electric brakes and tow package.

Unit commander Bek Brown said the vehicles are a crucial asset to the crew’s operations.

One of the key roles for the new ute is to transport a large fuel tank to the rescue boat.

“After each rescue, the tank needs to be refueled,” Bek said.

The vehicles were picked up from Mid Coast Automotive Group earlier this week after Marine Rescue livery was completed.

Crew members have said goodbye to an outdated land cruiser and an obsolete ute. They have each clocked up more than 350,000 kilometres.

The land cruiser joined the Crowdy Harrington family before the new millennium while the ute dates back to when Paul Keating was Prime Minister.

He said changes to the command, fresh ideas and a strong effort from volunteers has created a tight knit group.

You couldn’t wipe the smile off his face when talking about what the new vehicles bring to the table.

The organisation is the eyes on the water between Diamond Head and Black Head.

As a volunteer group, they welcome all funds and assistance. About three-quarters of funds held by the organisation are raised by members.

A PIECE of Australian soccer history will be up for grabs at Ingleburn next month.

Ingleburn Rotary Club is holding a fundraising event at Sweeney’s Function Centre where a pair of Socceroo and local hero Brett Emerton’s football boots from the 2006 FIFA World Cup will be auctioned.

Emerton, a former Gunners player and Macquarie Fields High School student, is expected to be a part of the Australian team at this year’s World Cup in South Africa.

All funds raised on the evening will go towards the PCYC’s Burn Rubber Burn program, which helps people in wheelchairs develop training regimes.

“The boots were made for Brett at the last World cup and are only one of six pairs in existence.”

A similar pair of Emerton’s boots sold for about $2000 recently.