Buried at:  Cremated at Pinegrove, NSW 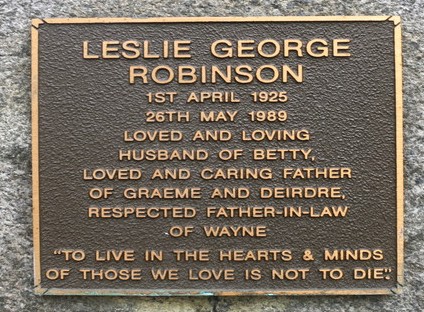 AN Albury man, who today lost a Quarter Sessions appeal against convictions for resisting arrest and assaulting a constable, alleged that he was bashed by police.

James William Gehrig, 53, woodcutter, of Prune lane, Lavington, an Albury suburb, told the Court he was about to go to bed on October 17 when police arrived.

They said, ” you have been kicking up a bit of a disturbance and are drunk, ” he added.

Gehrig said he told them it was his brother who had caused the trouble.

The next he knew he was being hit on the head with a baton.

Gehrig said he fought off the constables and kicked one in the knee.

When he reached the police station, another constable punched him under the chin while he was still wearing handcuffs.

When the handcuffs were taken off, he was knocked to the ground, and ” they stuck the boot into me, ” Gehrig said. He had been kicked and punched almost senseless. One policeman had jumped on his chest.

Dr. Felix Favaloro, Albury doctor, had treated him, and he had spent eight days in hospital.

Dr. Favaloro told the Court that when he examined Gehrig, he had a swollen face, blackened eyes, and numerous bruises on the back and shoulders, four broken ribs, and a probable contusion of the lung.

Constable Leslie George Robinson and Constable John Raymond Curtin ( # 7287 ) denied that Gehrig had been punched or kicked inside 0r outside the police station.

Constable Robinson said Gehrig had kicked him in the face, chest, and stomach.

Gehrig’s ribs might have been broken when he fell on him during a scuffle, he said.

Judge Brennan reaffirmed the Court of Petty Sessions convictions on November 13 on charges of resisting arrest, assaulting Constable Robinson, and causing malicious damage to a pair of police trousers.

He varied the sentence 0n the assault charge from 12 months’ good behaviour bond to a 10/ fine. He confirmed fines on the other two charges of 10/ each.