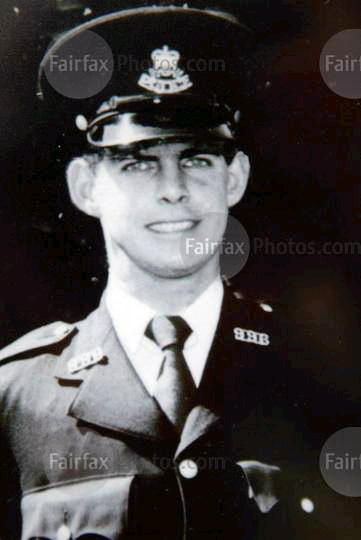 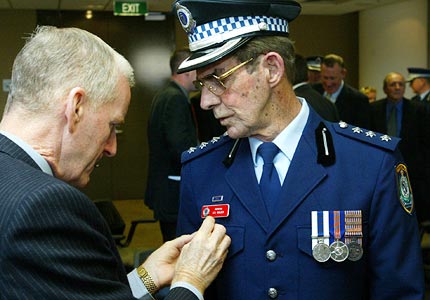 WALKER, Leslie William October 12, 2013 Late of Cherrybrook Beloved husband of Lorraine. Loving father of Cameron and Sarah. Poppy to Lee, Mal and Beau and pets Ginge and Belle. Aged 74 Years A chapter completed A page is turned A life well lived A rest well earned. Family and friends of LES are invited to attend his Funeral Service to be held at Castlebrook Crematorium Chapel, Windsor Road, Rouse Hill, Thursday (October 17, 2013) at 11.00am. UNITY FUNERALSAustralian Family Owned All Suburbs 9747-4000 – See more at: http://tributes.dailytelegraph.com.au/notice/3192278#sthash.eTMYvidW.dpuf

Loving father of Cameron and Sarah.

Poppy to Lee, Mal and Beau and pets Ginge and Belle.

A chapter completed A page is turned A life well lived A rest well earned.

Family and friends of LES are invited to attend his Funeral Service to be held at Castlebrook Crematorium Chapel, Windsor Road, Rouse Hill, Thursday (October 17, 2013) at 11.00am.

A first on his last day in the force

As a young constable Les Walker had to dodge trams in a city without traffic lights when he took up directing motor vehicles through where Pitt and King streets crossed.

With only one month’s initial training followed by another five weeks at the end of his probationary time, Walker had no radio linking him to back-up when first sent out walking alone on the beat.

“It was a bit frightening, I suppose, for a young fellow,” he says.

Five decades later as Walker’s career finally came to a close, senior police and politicians invoked Elvis Presley, Robert Menzies and Edmund Hillary in attempts to put into perspective the career of the country’s longest-serving cop.

The 65-year-old retires as the only man in NSW, probably Australia, and at one estimation possibly the English-speaking world, to reach 50 years of continuous policing.

The feat is so extraordinary the father of two left NSW Police as the first officer ever awarded a 50-year clasp to his National Medal.

With police now routinely retiring at 55, it is not a milestone that will be reached again, as each speaker noted in an anniversary and retirement ceremony at police headquarters in Parramatta 11 days ago.

Born in Lakemba, Leslie William Walker became a police cadet less than a month after his 15th birthday, on May 20, 1954, and a probationary constable on February 25, 1958.

He went on to serve under eight commissioners between Colin Delaney and the present commissioner, Ken Moroney, both of whom he knew personally.

A duty officer at Eastwood for his last years on the force, the still lean tennis player reached the rank of inspector in 1986 after more than 10 years as a traffic sergeant. He had not sought further promotion for various reasons.

Moroney, who served under Walker as a probationary constable in 1965, had been in third class at St James Primary School, Forest Lodge, when the now retiree joined the force. “When you reflect on 1954, when the greatest shock jock on radio was Gary O’Callaghan and Sammy Sparrow, we seem to have come an enormous way forward,” Moroney said. “Or maybe we’ve gone back.

“1954, when a young fellow paid $40 out of his own pocket to cut a record because he thought he had some musical talent and his name was Elvis Presley. 1954, when the names of Petrov, Evatt and Menzies were in the daily news.”

“To get up every day and put your uniform on and go out and do it again, despite what happened yesterday, despite what you saw, despite the belting you may have got, takes great strength, and Les has that.

“He’s found these great personal reserves of strength to get out and do it again and again, day after day, throughout his career.”

The shadow attorney-general, Andrew Tink, was so eager to join the nostalgia he excitedly claimed [incorrectly, by one year] that Walker was a police cadet before Edmund Hillary scaled Mount Everest.

“There are so many ways to put it,” Tink said. “But I understand your service is unique in Australia, and as far as I know it may well be unique in the English-speaking world.”

For his part, the man who upheld an oath to protect and to serve for 50 years was most thankful to his family: wife Lorraine, son Cameron, 21 and daughter Sarah, 18.

He had joined the force, he said, because his parents told him: “Son, get yourself a government job and you’ll always have a pay cheque”.

In 50 years the biggest change had been increased and improved training, but the basics of the job were still the same.

“The bottom line is if you enjoy working with the community it makes your job a lot easier,” he says. “It’s a lot more rewarding. When you break it all down, what you’re discussing 95 per cent of the time is people and their problems.

“You can’t resolve all their problems obviously, [but] we do as best as we can.”

Inspector Walker is currently a duty officer at Eastwood Local Area Command, which is in my electorate and I am very proud to have him serve there. Inspector Walker is well known for his ability to pass on his vast experience and knowledge to younger officers, and he has played that important role with the many young officers who have come under his care throughout his long career. Inspector Walker’s career reflects the highest level of personal integrity, leadership, and commitment to policing. This was recognised in 2002 with the award of the National Medal and the 45 years clasp and, in May 2003, with the Centenary Medal for service to the community as a police officer. Inspector Walker should also be congratulated on his recent receipt of the Australian Police Medal. NSW Police encourages its officers to strive to provide the best possible service to the citizens of New South Wales. The award of all these medals, particularly the Australian Police Medal, is evidence of Inspector Walker’s great work on behalf of the community of New South Wales. All members wish him the best upon his retirement.