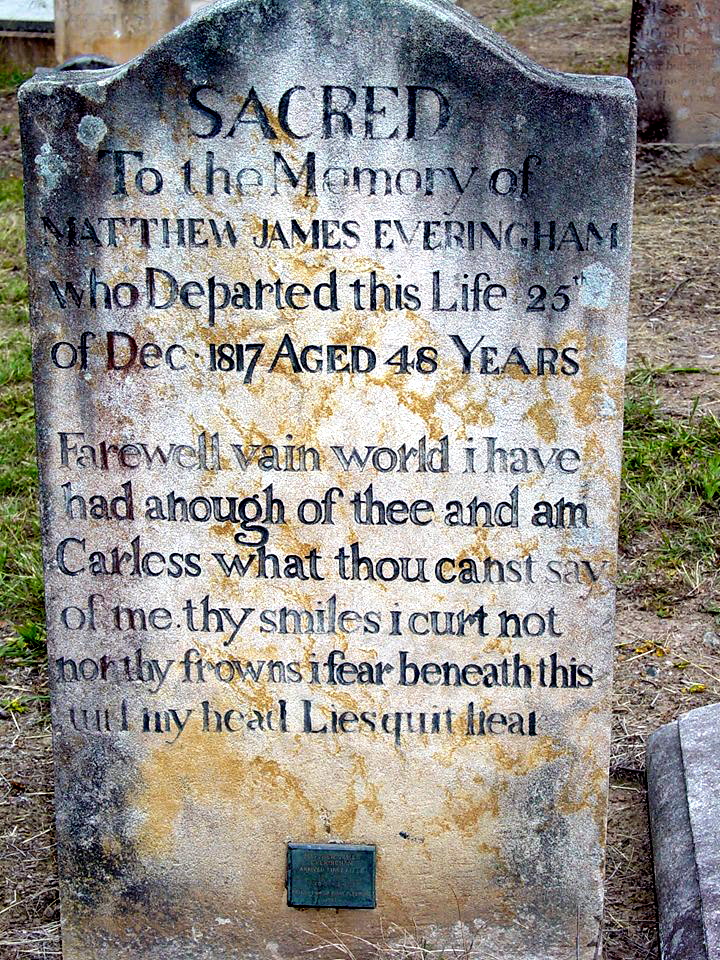 MATTHEW is NOT mentioned on the Police Wall of Remembrance

The Sydney Gazette dated 3 January, 1818 reported that “On Friday last Mr. Matthew Everingham, settler and district constable at Portland Head, fell overboard from a Hawkesbury boat, and was unfortunately drowned. On the finding of the body an Inquest was convened, who returned a Verdict Accidental Death. He leaves a large family to deplore his premature destiny.”

Constable Everingham was still news well over a century after his death. The Barrier Miner of 4 June, 1929 reported the following story.

Matthew James Everingham arrived in Sydney on the ship Scarborough in 1788. In 1791 he was married at Parramatta to Elizabeth Rhymes by the Rev. Samuel Marsden. In the same year he was granted 50 acres of land, then described as “at the Ponds two miles N.E. of Parramatta“.  Later he settled on the Hawkesbury River, on the farm afterwards known as Andrew Everingham’s Farm. He also became the owner of land at “Richmond Hills“, believed to be now in the Kurrajong district. He was appointed and remained district constable till his death in 1817. In that year he was drowned in the Hawkesbury River and was buried at Wilberforce, where his grave can still be seen.

At the time of his death the constable was stationed at Portland Head (Hawkesbury).

EVERINGHAM, MATTHEW JAMES (1769-1817), settler, was convicted in London on 7 July 1784 and sentenced to transportation for seven years. Shortly before his conviction he was employed as a ‘servant‘ by an attorney of the Middle Temple, hence the subsequent references to him as ‘attorney’s clerk‘. Allegedly ‘in great distress’ he had obtained two books by false pretences from the servant of another attorney, and these he had offered for sale.

NEWCASTLE has produced a claimant for the Everingham millions in Mr. Ernest Edward Chaseling, who declares that he is a direct descendant of Matthew James Everingham.

He says that his grandmother, Ann Everingham, was a daughter of Matthew. She married John Chaseling in 1818, and his father, Joshua Watford Chaseling, was a son of that union. Mr. Chaseling has two brothers and two sisters.

Matthew Everingham, history tells, was drowned in the Hawkesbury River before he could leave for England to claim £200,000. That was in the early part of last century. Interest on the money has accumulated until the sum of eleven million pounds is said to be now awaiting its rightful claimant.

Matthew James Everingham (1769-1817), settler, was convicted in London on 7 July 1784 and sentenced to transportation for seven years. Shortly before his conviction he was employed as a ‘servant’ by an attorney of the Middle Temple, hence the subsequent references to him as ‘attorney’s clerk’. Allegedly ‘in great distress’ he had obtained two books by false pretences from the servant of another attorney, and these he had offered for sale.

He arrived in the First Fleet transport Scarborough and was employed by Assistant Commissary Zachariah Clark. On 13 March 1791 Everingham married Elizabeth Rymes of London, who had arrived in the Neptune on 28 June 1790 and in July he settled on a 50-acre (20 ha) grant near Parramatta. In December Watkin Tench noted that ‘the Attorney’s Clerk’ appeared to find the cultivation of his own land ‘not half so easy a task as he formerly found that of stringing together volumes of tautology to encumber or convey that of his neighbours’; but for once Tench was unjust. Far from being ‘out of his province’ Everingham succeeded as a settler. In 1800 he signed the address to Governor John Hunter setting out ‘the grievous and intolerable burdens’ under which the settlers at the Field of Mars had long laboured; soon afterwards he disposed of his grant to Andrew Hume and like many of the early grantees moved to the Hawkesbury where farming prospects were better. By 1803 he was well established at Portland Head, but in 1804 his home and farm buildings were burned by natives and he, his wife and servant were speared, though happily their wounds were not fatal. In 1816 he acquired 130 acres (53 ha) at Richmond Hill, and became a district constable. A year later, on 25 December 1817, he was accidentally drowned in the Hawkesbury. In a memorial to the colonial secretary in 1825 his widow claimed, apparently without financial result, that he had died while in the execution of his constabulary duties.

Everingham was survived by five sons and four daughters, and was buried in St John’s cemetery, Wilberforce. His career was not spectacular, but over a long period he discharged his duties faithfully and worked steadily as a pioneering settler.