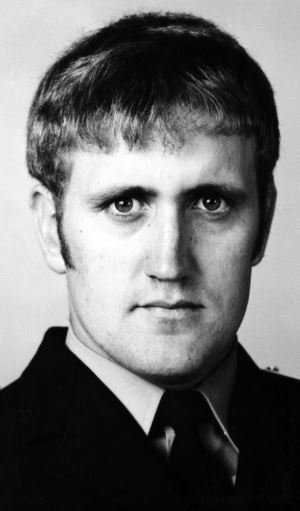 Buried at:  Rendelsham – near Millicent

MATTHEW is mentioned on the Police Wall of Remembrance

March 29, 1982 | Two young constables, Warren John Matheson, 24, and Matthew John Payne, 22, died after a vehicle they were pursuing through Adelaide’s south-western suburbs swerved into their police car. Police subsequently charged the driver of the pursed vehicle with a number of very serious driving offences.

Community members joined Limestone Coast police at a ceremony at the Mt Gambier Police Station on Thursday for the National Police Remembrance Day.

The presence of riderless horse at a ceremony at the Mt Gambier Police Station on Thursday was a time-honoured way of paying respects to the fallen.

Such gestures have been hallmarks of military and State funerals since the nineteenth century.

Local officers arranged for the riderless horse with boots reversed in its stirrups to be part of the annual religious ceremony to mark National Police Remembrance Day.

In retirement, “Limelight” was brought to Mt Gambier by its former rider Senior Constable Stephanie Cooper.

After nine years with the Mounted Cadre, Senior Constable Cooper is now on general police duties in Mt Gambier.

She rode another horse “Star of Courage” to the ceremony while “Limelight” was led to it by Constable Barb Bushell.

The two horses stood guard while community members and police honoured those who had given their lives in the line of duty.

She laid a floral tribute in memory of her eldest son, Warren John Matheson, who was killed while on police duty in Adelaide in 1982.

At the time of his death, he was a 24-year-old married father with an infant son and daughter.

He was laid to rest in the Carinya Gardens Cemetery in Mount Gambier.

Mrs Matheson said another young officer from this region was killed in the same motor vehicle collision which claimed the life of her son.

“He was 22-year-old Constable Matthew Payne, of Rendelsham.

“Matthew was not supposed to be on traffic duties with Warren on this day but his regular partner could not make this shift.

“Matthew is buried at Rendelsham.

“I have been coming to these annual ceremonies for several years.

“One has been held at Warren’s grave while another took place at the Rendelsham cemetery.

“In recent years, we have been holding the ceremony here at Mt Gambier,” said Mrs Matheson.

A wreath was also placed on Constable Payne’s grave later in the day by Sergeant Richard Murphy, of the SA Police Legacy.

The master of ceremonies in Mt Gambier was Sergeant Andy Stott while the prayers were led by Police Chaplain and Mt Gambier Anglican parish priest, the Reverend Canon Brian Ashworth.