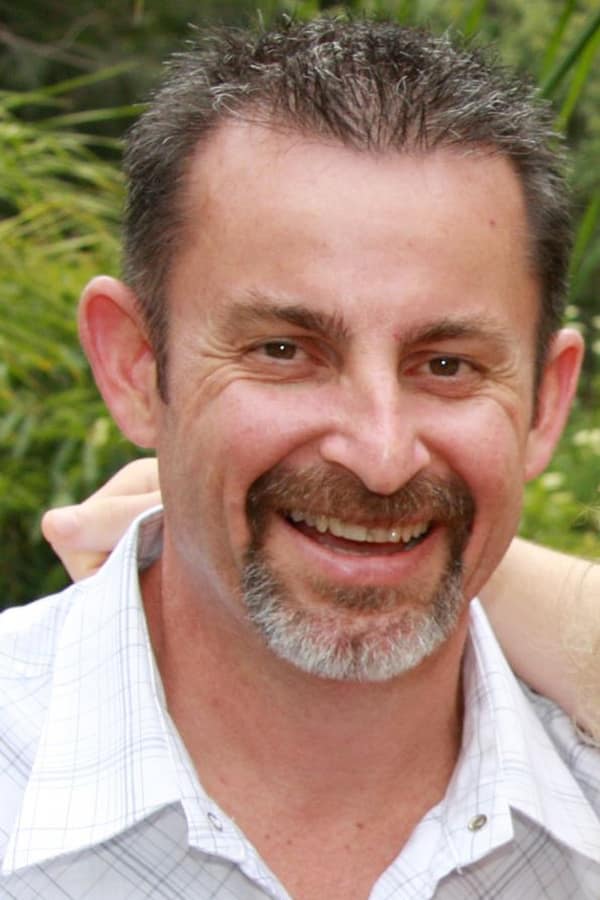 Awards:  No Find on Australian Honours system – however

Cause:   Murdered – hit to head with hammer

Wake: After the funeral, friends will be meeting at Club Sapphire, 119 Main St, Merimbula.

An offer of help and assistance by retired police officer Mick Horne has cost him his life.

Mr Horne retired as a Senior Constable in 2009 after serving at Bega Traffic & Highway Patrol Command.

At about 3.30pm on Friday (June 1), 71-year-old Thomas Winner and his 69-year-old wife Gail were stabbed in their East Street home by a man alleged to be their grandson, 20-year-old Murray Deakin.

Tragically, Mrs Winner died at the South East Regional Hospital shortly after, while Mr Winner remains in Canberra Hospital in a critical condition.

In the hour that followed, officers from the South Coast Police District pursued a car belonging to the couple, which was allegedly being driven by Deakin.

At about 4.40pm, Mr Horne, who appears to have stopped to offer assistance to Deakin on Sapphire Coast Drive at Bournda, thinking he was a motorist in need, was allegedly struck in the head with a hammer.

Police allege Deakin then made off with the 54-year-old’s vehicle before crashing it and running into bushland.

A father to one son, Mr Horne was airlifted to St George Hospital where he died early yesterday afternoon (June 3).

Appearing in Batemans Bay Court earlier today via a video link, Deakin did not enter a plea but now faces two murder charges.

Fairfax Media reports the 2o-year-old told the court he was sorry, before speaking briefly of drug and mental health issues.

Police say Mr Horne’s family has asked for privacy and won’t be making any statement to the media.

Speaking to the RiotACT, Merimbula’s Jase Holly says the community has lost one of its pillars.

“I got to know him and his son Tom through the local AFL club,” he says. “He was a doting father and loving husband to Mel, who in recent years fought off serious health issues with the support of Mick at her side.

“Mick was an avid sport fisherman and he loved taking any opportunity for fishing banter! I will always remember one morning when I was towing the boat home and was surprised when the flashing lights of a police pursuit car were flashing behind me. What had I possibly done wrong? Then I saw Mick walking up to the window.

“Not realising it was me, he just wanted to have a good look over the boat as it had struck his eye as “a good bit of gear.” In typical Mick form, he spent about 30 minutes going over all the little bits of customisation taking away a few ideas for his own boat set-up.

“As a cop, Mick was fair without fault, a gentleman in the truest sense of the word and a loving family man. He was a friend to everyone that knew him and I think the last time I saw him summed Mick up perfectly.

“As we waited in the barbers for a haircut, he was ahead of me in the queue but when his time came he let me go first so I could get back to work, it also gave him some extra time to talk fishing with everyone in the room!

“R.I.P. Michael Horne, you died offering help and service to someone in distress. Your legacy will shine in all that knew you.”

Other friends have expressed their condolences and paid tribute via social media.

“Mick Horne you died attempting to protect and serve, being a former police officer. Stopping to assist someone you thought needed help only to be attacked in the process.” – Marie Hart on Facebook.

“He sure was a lovely chap and thought he was doing the right thing and paid the ultimate price. So so sad RIP Mick.” – Rick Stafford on Facebook.

“Thinking of Mick and family so very sad. Prayers of strength and love.” – Andy O’Donnell on Facebook.

“So sorry to hear the sad news thoughts and prayers for Mick Horne’s family he was a wonderful man.” – Evi Scott on Facebook. 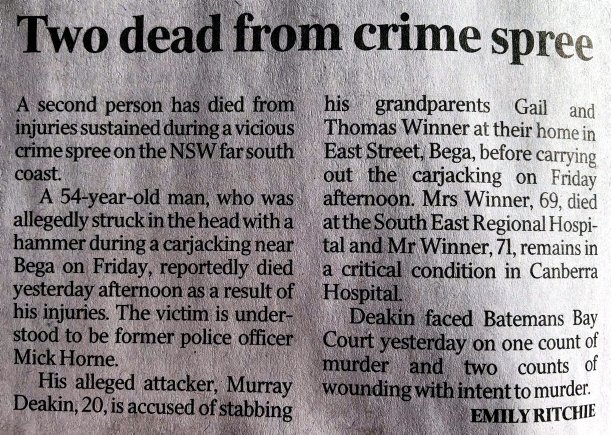 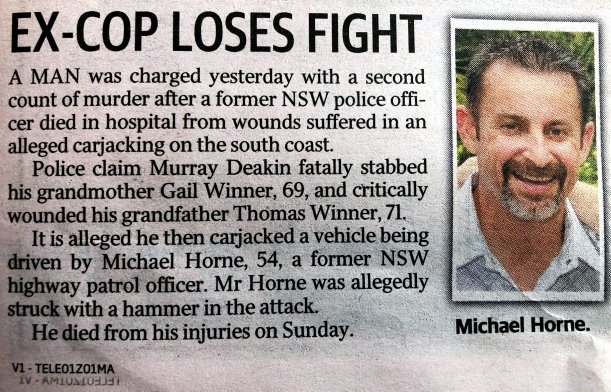 A man accused of killing his grandmother in the NSW south coast town of Bega last week has now been charged with the murder of a 54-year-old former police officer, who died in hospital yesterday.

Police alleged 20-year-old Murray Deakin stole Michael Horne’s car and attacked him with a hammer, after earlier stabbing his grandparents at their East Street home in Bega on Friday.

Mr Deakin appeared in Batemans Bay Local Court today where a charge of wounding with intent to kill Mr Horne was upgraded to a murder charge.

He spoke via video link.

“I’m sorry, I used psychedelic drugs and I have a family history of schizophrenia,” he said.

The magistrate interjected, telling him it was best to let his lawyer speak on his behalf.

He did not apply for bail and will reappear in court in August.

Mr Deakin had already been charged with the murder of his grandmother Gail Winner, aged 69, who died in hospital after allegedly being stabbed in her East Street home.

His grandfather Thomas Winner, 71, remains in a critical condition in hospital after he was also allegedly attacked by his grandson at his home.

Mr Horne was allegedly attacked by Mr Deakin as he tried to steal his car on Sapphire Coast Drive in Bournda, 20 kilometres south of the initial attack.

New South Wales Police said Mr Horne retired as a senior constable in 2009 after serving in the Bega Traffic and Highway Patrol Command.

The events unfolded about 3:35pm on Friday when a passing motorist was flagged down by Mr Winner.

Witnesses said they saw a man lying on the ground, covered in blood and desperately trying to flag down help.

When emergency services arrived, they also found Mrs Winner, who was critically injured.

She died in hospital after the attack, while Mr Winner remains in a critical condition at Canberra Hospital.

Friends of Mr and Ms Winner told the ABC the couple were kind and that the attack had come as a shock to the small community.

A man accused of murdering his grandmother and critically wounding his grandfather, then fatally wounding a former NSW police officer on the Far South Coast of NSW has told a court he is sorry.

Murray Deakin, 20, appeared briefly in Batemans Bay Local Court  on Monday charged over the stabbing of his grandparents Gail and Thomas Winner at their home in East Street, Bega, on Friday.

Mrs Winner, 69, died at the South East Regional Hospital and Mr Winner, 71, remains in a critical condition in Canberra Hospital.

Mick Horne, a 54-year-old former senior constable with NSW Police, was allegedly attacked with a hammer during a carjacking in the neighbouring town of Bournda. He died as a result of his wounds in St Georges Hospital on Sunday afternoon.

Police said the rampage began about 3.30pm on Friday when Mr Deakin stabbed his grandparents at their home, before fleeing in their car.

It is alleged that, after abandoning the car in Bournda, he carjacked another vehicle, using a hammer to attack Mr Horne, the driver.

A female passenger in the car escaped without injury.

On Monday, Mr Deakin faced Batemans Bay Local Court via audio-visual link charged with two counts of murder and two counts of wounding with intent to murder. He is yet to enter pleas.

Defence solicitor Keely Boom did not apply for his release on Monday and bail was formally refused.

Mr Deakin told the court he was sorry for his actions and spoke of his history of mental health issues.

“I’m so sorry,” Mr Deakin said. “I have a family history of schizophrenia.”

Mr Deakin went on to tell the court of his history with “psychedelic drugs”, before magistrate Mark Douglass cut him off.

Mr Horne was awarded a medal in 2004 for his 15 years’ service with the force.

He has been described by community members on social media as a “wonderful man” and a “lovely chap … who paid the ultimate price”.

“The local community would be quite upset by the incident. This is not something that is usual in the area,” she said.

“[Mr Deakin] was unwell [when he was arrested]; he needed to be taken to hospital to be looked at by an expert.”

Mr Deakin is due back in court in August.

Blood and hair samples will now be taken from Mr Deakin.

Mr Horne retired as a senior constable in 2009 after serving at Bega Traffic & Highway Patrol Command, NSW Police said in a statement on Monday.

“The family would appreciate privacy at this time,” the statement read.

As a now long retired Police Officer I believe that Mick Horne’s tragic death once again highlights the real need in the community for adequate mental health funding. Quite honestly Mick Horne could have been any one of us, instinctively reaching out to help another person in apparent trouble. The grief that his death, and the manner in which it occurred , may have been prevented by pro-active , well funded mental health services. This particularly so as the wider Australian community tries to come to terms with the tsunami of various drug abuse across all sectors of society. Illegal… Read more »