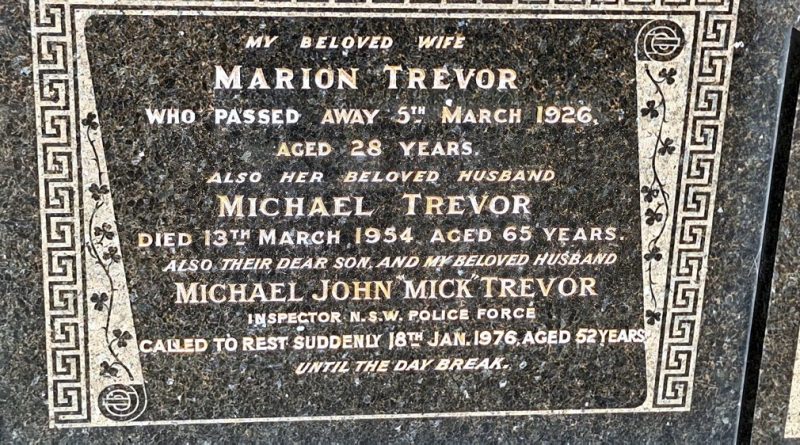 IN the Supreme Court of New South Wales.—Notice of intended distribution of undermentioned estates — Any person having any claim upon the undermentioned estates must send particulars of his claim to the Public Trustee, at the address appearing below, on or before 1st September, 1976. The Public Trustee will distribute the assets of the estates, having regard only to the claims of which at that date he has notice.

Phillip Martin
When I was attached to 7 Division general duties in the 1960s, I bumped into Mick Trevor fairly regularly working at various events eg. Randwick Races, SCG rugby league. Mick was a sergeant in those days and was a gentleman.
Terrence Psarakis
I Knew Mick Trevor well. He was my boss at No.15 division and was my boss at 3 man station Malabar substation of 15 Div.
Mick was a shy bloke with subtle humour. Was in the Police choir at some stage. He was also a good wrestler as was Stan Franklin and Jim Armstrong. Last saw and spoke with Mick was when he was an Inspector at Central Police Stn. No.1 Div. Late 70s. Was a good man. Rest in Peace.

After conducting an inquest at the Court House yesterday into the death of Clement Alexander Boon, the Corner ( Mr. W. H. Hall ) found that the deceased died from injuries wilfully infected by himself with a .22 calibre rifle on April 15.

Boon was found lying in the back yard of his aunt’s home at 517 Chapple Street on that day. There was a bullet wound in his right temple and a .22 calibre repeating rifle was lying beside him. At the time of the accident there was no one but deceased present on the premises.

From evidence stated yesterday, deceased, appeared to be in excellent health and spirits prior to his death. He was described by several witnesses as “happy-go lucky”, although he was never known to have confided in anyone.

Dr. Keith J. Wilson, medical practitioner, told the coroner, that when he answered a call to 517 Chapple Street about noon on April 15, he found the deceased lying on the ground outside the back door of the premises.

Deceased was then alive, although unconscious. He was conveyed to Hospital, where he was examined by Dr. R. T. Bull.

Dr. R.T. Bull said yesterday that when he examined deceased he found he had a circular wound above the right temple region of the scalp. The wound was bleeding profusely and deceased’s breathing was stertorous. He died at 2.30 pm. that day.

The Acting Government Medical Officer. Dr. T. L. Dunn said that he conducted a post mortem on the body of deceased 9 am on April 16. He found that there was a small punctured wound in the scalp about quarter of an inch in diameter. There was no sign of powder marking on the skin nor singeing of the hair, although there was blacking within the wound. Internally the skull was fractured round the cranium. There was a small piece of lead lying under the scalp. Between the two holes in the skull there was a tunnel 2 inches wide, which traversed the brain, causing it to become very confused.

Explaining why there were no powder marks or blencing. Dr. Dunn said the barrel of the gun must have been held so firmly to the scalp that the gases and powder of the bullet followed the bullet into the cranial cavity. The passage of the bullet and inter-cranial pressure that brought about by the expanding gases caused the extensive brain damage and haemorrhage which were the cause of death, Dr. Dunn said.

The rifle which was found beside the deceased was identified yesterday by Donald. J. Tyson,. of 517 Chapple Street. Tyson said he had occupied the same room as deceased for the past six years. The rifles, his property, was unloaded when he put it between the wardrobe and the door of the room after using it on March 29.

Mervyn L. Sanderson, storeman, of 571 Chapple Lane, said that he had a few drinks with deceased and some other men at the Victoria Hotel about 5 p.m. on April 14. He noticed deceased was rubbing his eyes, which appeared to be watery. Witness said, “What’s the matter, are you short of money?” Deceased said, “No, I’ve got plenty of dough. I’m getting as bad as a baby, crying when I’ve had a few drinks.” Deceased mentioned that he was going to be married soon and had a “real nice girl.” witness said.

Clara Bertha Gilby, ,shop assistant, of 555 Chapple Street, said she had known deceased for a period of 14 years. She became engaged to him in July of last year. She said deceased had never at any time intimated to her he was about to take his own life.

Deceased’s aunt, Mrs Jean S. Tyson of 517 Chapple Street, said he had resided with her for the last six years. About noon on the morning of the fatality she, went across the road to a shop.

Before she went she told deceased to look after the dog and not let her follow her. She was away about 10 minutes when the dog entered the shop. When she returned witness went round to the back of the house; she called the deceased and received no answer. She walked further into the yard and found him on the ground. Witness said, “Whatever happened. Clem,” but deceased only groaned in reply.

Constable Michael J. Trevor told the coroner that from his investigations he had learnt that deceased was of a happy disposition, and a moderate drinker. He was about to be married and was waiting to obtain a home. Deceased had been a member of the Army in the last war, but had never been overseas.

Keith James Balman, who had identified the body to the coroner, said he had known deceased for 28 years.

In his summary, Mr. Hall said he could find no direct evidence as to how deceased met his death, but guided by the evidence of Dr. Dunn’s post mortem, he concluded that deceased died from haemorrhage and brain injuries wilfully inflicted by himself with a .22 calibre repeating rifle at 517 Chapple Street on April 15.