What is Geo Targeting?

Let us assume that the random map below represents a map displaying six mobile phone towers – anywhere in Australia.
There are two groups of two towers and then two single towers on the right side of the map.
For argument sake – we will say that the two single towers on the right solely use the Vodafone system and the two groups of two, use the Telstra & Optus networks only.
The red area is commonly called a ‘footprint‘, i.e. if you are within the red area, you will have full service with your Telstra or Optus provider.
This would most likely mean that anyone who is operating a mobile phone on the Vodafone system will not be able to make or receive phone calls or text messages within that red area – as their provider ( Vodafone ) simply don’t have coverage there.
The ‘footprint‘ of these mobile towers might be 20+kms wide.
There are various mobile phone networks in Australia.  Most mobile phones will work wholly or partially via one of the major providers systems but most mobile phones won’t / can’t receive from their competitors towers – so your mobile phone is limited in the coverage it can obtain from the one provider that you subscribe to.
Despite your mobile phone not being able to pick up your providers tower signal, technology exists that enables our Emergency Services to broadcast messages to every mobile phone, at the same time, NO MATTER who your Australian provider is.
As long as your mobile phone is within the ‘footprint‘ of ANY operational mobile phone tower ( no matter who the provider is ) you WILL receive the message.
Scenario 1:
A young child has gone missing from home and it is believed, by Police, that the child will most likely be within a 20km distance from home.
The Police now have the technical ability to issue a Text message to people who have Mobile Phones within a 20km radius of the nearest mobile phone tower near where the child went missing.
By using this electronic ability, the Police will send a Text message, possibly with a photo of the child, to every Mobile phone within the ‘footprint‘ ( Geographical Targeting )( Geo. Targeting ) of that mobile phone tower.
The phone number that you will see on your Mobile phone will be +61444444444     ( +61 ) is the International phone code of Australia followed by nine 4’s.
If you are within that ‘footprint‘ and have a Mobile phone – you will receive the message ( if your phone is turned on ) – NO MATTER WHICH SERVICE PROVIDER you subscribe to.
If you are simply driving through that area ( but don’t live anywhere near the area ) you will receive the message from that tower.
If your mobile phone only works on the Vodafone system ( and you are within the ‘footprint‘ of that tower – you will receive the message.
This system, NO MATTER WHICH SERVICE PROVIDER you subscribe to – will be received by your Mobile phone IF you are within the ‘footprint‘.
If the Police need to broaden the message ‘footprint‘, they can simply include mobile phone towers further along the path that they suspect the missing child may have wandered and then the mobile phones within that next mobile tower ‘footprint‘ will broadcast the message to every mobile phone within it. 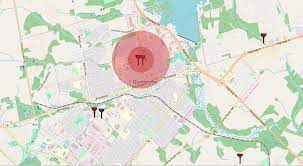 Scenario 2:
There is a wild fire, from a petrol plant, that has started within the red area and the Fire Brigades need people to evacuate the area – this system is then enabled and messages with appropriate warnings and directions are issued to all Mobile phones within the red area.  If the fire is spreading in a certain direction ( lets say – towards the next two towers ), appropriate messages can be sent to anyone within the ‘footprint‘ of those towers – warning them of the dangers etc.