Previous member of the Irish Constabulary

Cause:  Horse riding incident – whilst in a wagonette – see article below 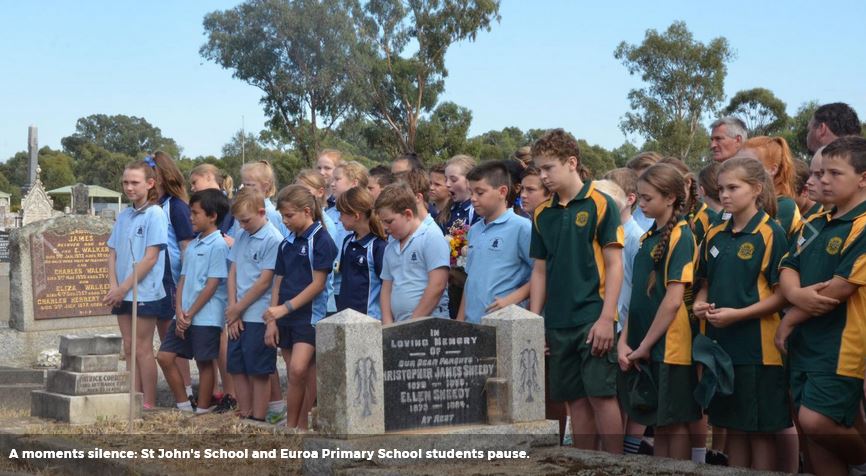 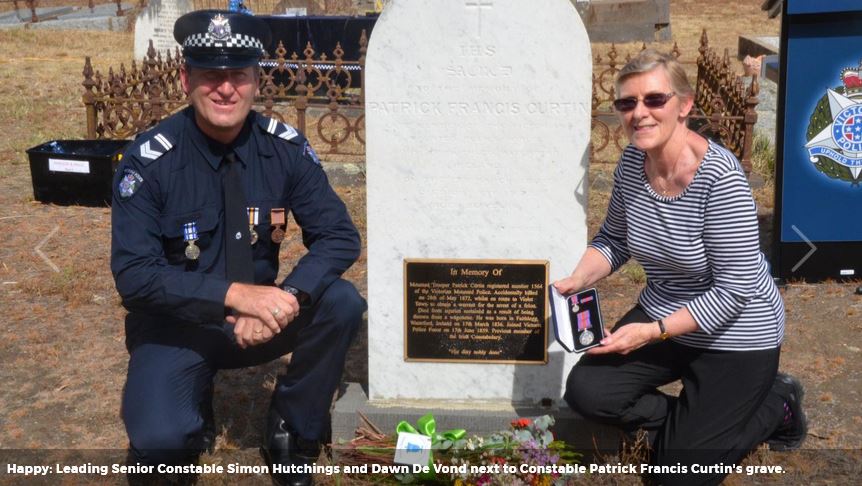 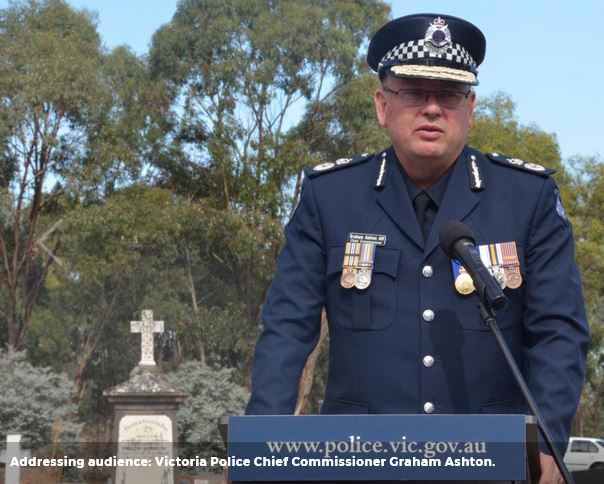 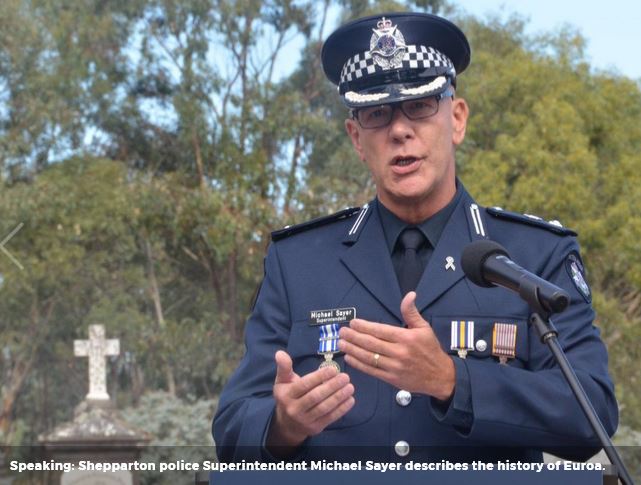 Former Euroa public cemetery caretaker Max Burnside never expected to discover the grave of a police officer who died in the line of duty almost 150 years ago.

He was busy mowing the lawn at the cemetery about 10 years ago when he spotted some white marble sticking out of the ground.

‘‘I thought it was just a stone that would hit the mower and do some damage one day, but it turned out to be a headstone completely under the ground,’’ Mr Burnside said.

The headstone belonged to Victoria Police Mounted Trooper Constable Patrick Francis Curtin, who was born in Ireland on March 17, 1836, and died near Violet Town on May 28, 1872.

Mr Burnside managed to uncover Const Curtin’s headstone and cleaned it up.

Having an active interest in history, Mr Burnside then went home and started researching the police officer’s death.

It was believed Const Curtin was the first police officer to serve at the Euroa police station and died when he was travelling back from Violet Town by wagonette after obtaining a warrant.

While attempting to avoid a rough area on the road the horse stopped, causing Const Curtin to be thrown from the wagon.

The incident caused Const Curtin’s pistol to perforate his bowel and his neck was broken during the incident.

He died a short time later, aged 36, and was buried at the Euroa public cemetery, where he quietly rested until his grave was brought to the attention of police in 2009 when a break-in happened at the cemetery’s storage shed.

During this event Mr Burnside met Leading Senior Constable Simon Hutchings, who was stationed at Euroa police station and showed a keen interest in the discovery.

Leading Sen Const Hutchings obtained a range of records about Const Curtin’s service and brought the grave to the attention of the Victoria Police Graves Committee.

Const Curtin was honoured during a grave re-dedication ceremony on Wednesday at the Euroa public cemetery.

The service was attended by Victoria Police Chief Commission Graham Ashton, who spoke about the importance of these ceremonies in showing police that their service would never be forgotten.

Ms De Vond said it was wonderful for her great-great-grandfather to receive recognition.

‘‘When I got the initially phone call I was just blown out of the world, I just thought this is incredible,’’ Ms De Vond said.

‘‘I’m proud to be here, it’s just really lovely and I didn’t expect such an occasion.’’

Before Victoria Police contacted Ms De Vond she did not know a lot about Const Curtin.

She said the Victoria Police Star she accepted on her great-great-grandfather’s behalf would be donated to the historic society.

SHOCKING DEATH AT EUROA. Dr. Henry, M.B., deputy coroner for the Benalla district, held an inquest on Wednesday, the 26th inst., at the Pilgrim Inn, Euroa, on the body of Fritz Bohlmann, a waggoner.

The jury having viewed the body, Daniel Kelly, carrier, residing at Benalla, deposed on oath.- I know the deceased Fritz Bohlmann. Have been acquainted with him seven or eight years. He was about 40 years of age. He was born in Holstein-Schleswig. He was, I believe, a single man. I saw him last alive at the Duck Ponds about 12 o’clock noon yesterday. He was a little the worse for drink when I first saw him; and I advised him to go into his waggon and have a sleep, and I promised to drive his team till we came to Euroa, which I did. When I went to awaken him I found he was dead. He was lying with his face downwards on his blankets. His head was lower than his feet, which were resting on some sheep. skins. I reported the matter to the police immediately.

By the Foreman. – It is five miles from the Duck Ponds to Euroa. I saw him several times during the journey, and he had not altered his position. He never spoke to me after he got into the waggon. I did not disturb him thinking him to be asleep.

By the Police. – He has a brother in Melbourne. He has a waggon and seven horses. On the waggon were some sheepskins and a hide. The harness was complete all but one set.

John Nicholson, M.D., deposed.- I am a legally.qualified medical practitioner, residing at Benalla. I have this day made a post-mortem examination of the body of deceased Fritz Bohlmann, now lying dead at the Pilgrim Inn. The body is of a stout, muscular build, height about 5 feet 7 1/2 inches, and aged I should say about 40. The head,, neck, and upper part of the chest were very much congested and black. There were no marks of violence externally, nor any old scars. Internally the lungs were gorged with blood; all the other organs were healthy. It appears to me that deceased died from suffocation. Lying on his face in the manner described by last witness, during a state of intoxication, would be sufficient to account for the suffocation. There was no blood in the pleural cavity. I did not examine the stomach.

Patrick. Francis Curtin, police constable stationed at Euroa, deposed.- From Information I received yesterday I proceeded to a waggon in the main street of Euroa. nearly opposite the Pilgrim Inn. – I found the deceased Fritz Bohlmann, and had him removed to the Pilgrim Inn. I searched him in company with several others. and found 17s. in one pocket and 6d. in another, also a knife. I and two others searched the waggon by candlelight to see if we could find any money, as the deceased was supposed to have some. Not finding any last night I tried again to-day in company with others, and found three £5 notes and two half-crowns. The total amount in my possession is £16 2s 6d., together with seven horses, a waggon and harness, a hide, and some sheepskins When I went first to the waggon he was partly sitting, one leg being bent under him.

The jury brought in the following verdict:- ” That Fritz Bohlmann did, on the 25th day of April, 1871, on his journey from the Duck Ponds to Euroa, die of suffocation, and that there were no marks of external injury on the body of deceased.”

A magisterial inquiry was held by Mr Gall, on Friday evening, the 8th instant, at the Seven Creeks Hotel, Euroa, touching the death of Henry Bond, who had been run over that morning.

John Wakenshaw, residing at Model Farm, near Violet Town, deposed — I have seen the deceased, Henry Bond. He was in my employment about seven weeks. He was assisting me to break in a young horse to harness for Alexander Munroe, and to see him safely on the road. Henry Bond took charge of the break at the incline on the bridge where the floods washed it away. I was in charge of the body horse when going up the incline, and I looked back and saw the wheel go over the deceased’s body. I called to Mr Munroe to stop the team, but seeing that the wheel was likely to come back on the body I called to him to go on to level ground. I then assisted deceased to the nearest hotel. He then said he thought he was dying. Deceased was perfectly sober at the time.

Alexander Munroe deposed — The deceased, Henry Bond, was helping me with a young horse to break it into harness. When we came to the Euroa bridge I asked him to take charge of the break. Next saw him lying on the road. I stopped the horses and came back to his assistance. Deceased said that the wheel of the dray had gone over him. Assisted to carry him to the nearest hotel. The weight on the dray was about 35cwt. There were three horses in the dray at the time of the accident. We started this morning from Mr Garrett’s, Euroa. The accident happened about half-past 11 this day (Friday).

John De Boos deposed — At about half-past 11 o’clock to-day I saw the deceased Henry Bond, and assisted him into my hotel and placed him on a bed, having heard he had been run over. I assisted to undress him. A doctor who was in the township arrived 10 minutes after the accident. In answer to the doctor, deceased said that the wheel of the dray had gone over his body. The doctor examined deceased and said that he could not do anything for him at the present, that the injuries were internal, and deceased was bleeding internally. Remained with deceased until he expired, which was at 12 o’clock at noon. The doctor, being under engagement to attend a patient at the Broken River was unable to be present at this inquiry.

Thomas Bond, son of John Bond, farmer, residing at the Bald hills, near Violet Town, deposed — At about half-past 12 o’clock to-day (Friday) I received information that my brother Henry Bond was hurt at Euroa. Arrived at Euroa at about 1 o’clock, and then saw my brother dead. He was about 22 years of age, and in the employment of John Wakenshaw.

Patrick Francis Curtin, police constable stationed at Euroa, deposed — At about half-past 11 o’clock to-day from information received I ran from the tollhouse on to the road. I saw Mr Wakenshaw assist Henry Bond off the road. Mr Munroe came up nearly at the same time. I spoke to deceased and asked him what had happened to him. He told me that the wheel of the dray had gone over his loins. He then walked about 70 yards with the assistance of two men to the Seven Creeks Hotel, at which place he was supplied with a bed and other necessaries. His clothing and boots were taken off. Mr Clarke was sent for. The doctor was in attendance in about 12 minutes after he was placed on the bed. From the time of the accident up to his death was about half an hour.

The finding was that the deceased, Henry Bond, was accidentally killed by a loaded dray going over him on the bridge at Euroa.

The Gazette of Friday evening contains the following announcements –

Patrick Francis Curtin, constable to be clerk of petty sessions (acting) at Violettown,