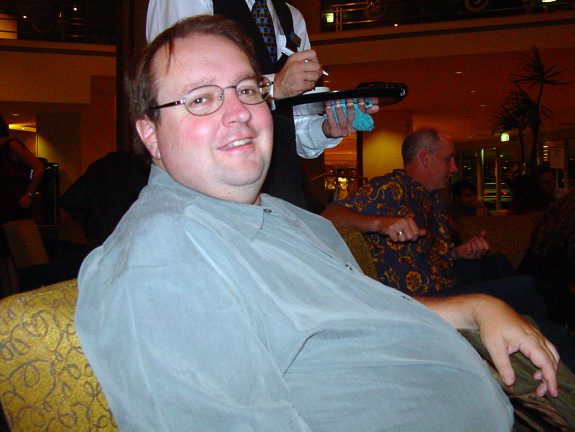 Passed away suddenly after a courageous battle on September 4, 2011 (Fathers Day) of Blackbutt. Beloved husband of Bronwyn.Dearly loved and adored father of Mariah, Max.Son of Joan (dec) and Ernest (dec). Loved brother of Wayne. Cherished family member of Joan and Eric Dronfield and family, Margaret and Frank McNamara, the Gullicks and the Callow family. Paul will be sadly missed by his loving family and many dear friends here and in our hearts.Aged 51 Years
God has you in his keeping
We will miss your smiling face, a special person, no one can replace.Relatives and friends are invited to attend Paul’s funeral service to be held at Figtree Anglican Church, Gibson’s Road Figtree on Thursday at 1:00pm. In lieu of flowers donations to Diabetes Australia Foundation would be appreciated.Illawarra Mercury, Wednesday September 7, 2011Paul was a Comms Officer at VKG2 (Warilla) from about 1987 and also worked with the SES and also attended the Thredbo Landslide Disaster.

He was a great bloke with a big heart, a great laugh and was always willing and happy to joke around.

We will miss you mate.

Paul Sterry joined the New South Wales State Emergency Service in 1978, he was 19 years old. Even though he held a job as a young clerk with the Public Works Department he held down at least another two part time jobs in addition to his role in the communications area of the Illawarra South Coast Division Headquarters.

Paul moved to the Kiama Unit in the mideighties and fitted in straight away, and thus was born a relationship between Paul and the Kiama Unit that lasted more than a quarter of a century. The Paul Sterry that the Kiama Unit knew and loved was generous to a fault and always willing to help anyone.
One of the Unit’s memories of Paul was at the Jamberoo Bus Crash in 2005, when a bus carrying more than 20 tourists rolled over on the Jamberoo Mountain Pass. Paul arrived in his car a few hours after the rescue began, opened his boot and started to distribute drinks, chocolates and snacks to the exhausted rescuers. Within a few minutes the boot was empty and Paul was heading back down the mountain for new supplies.
Paul was known as a joker by those who knew him well. He would often appear to talk very seriously about an issue and then, once everybody was well and truly involved, come out and say “I was only joking”. Even those who knew him well would be caught off guard by his wicked sense of humour and ability to appear completely serious until the right moment to come clean.
Louise Ashton, another member of the Kiama SES unit works at Wollongong Hospital where Paul spent long periods of time during his ongoing battle against diabetes. It was her
ritual to pop in each day before finishing work to check on him and have a quick yarn. Paul’s hospital room was like a mini office – he had bags full of paperwork, including SES receipts at times. Louise reported that the staff often commented that Paul was a delight and would often sing to them. He will be missed by all.
Paul was a recipient of the National Medal in 1999 as well as the State Medal for Hunter and Central Coast Storms in 2007. He also was awarded the SES Long Service Awards for 5, 10,
15, 20, 25 and 30 years of service with the SES.
He will be remembered by the members of the Kiama SES as one of its primary carers.
Throughout his 32 years with the Service Paul focused on caring and providing support for its volunteers, especially in times of disaster.
When Kiama SES were out helping others in our community it was Paul that would be standing behind them and supporting them with the food and equipment they needed to get the job done or offer a quiet, comforting word after a horrific crash or rescue.
At the funeral on Thursday 8th of September the SES said farewell to a great SES member.
Paul is survived by his wife Bronwyn and children Moria and Max, who will all miss him greatly.
Extracted from the eulogy by John Wall, Deputy Local
Controller, Kiama
Funeral Service Location
4 Gibsons Rd, Figtree NSW 2525
chapel, FIGTREE ANGLICAN CHURCH
minutesOrdinaryMeeting27September2011
Please follow and like us: