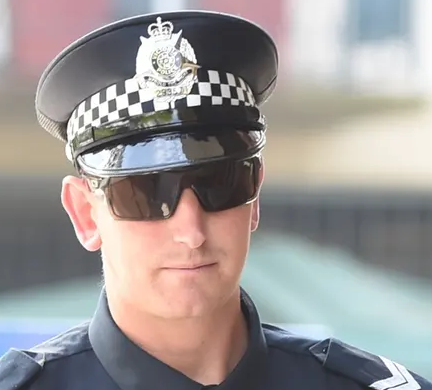 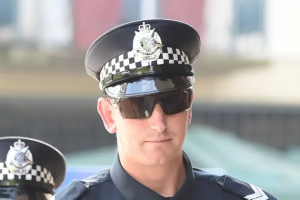 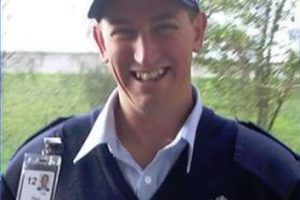 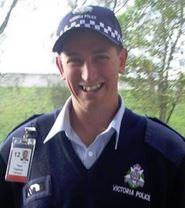 Today I attended the funeral service of Senior Constable Paul TOPHAM and listened to the many messages of love and appreciation of a great family man that Toppy was.

As I stood in the foyer of the Cumulus Stratus Chapel, I observed a full house of family, friends and police members paying respects to a man that was destined to be a member of the blue army. 6ft 9 inches tall and it was mentioned very big feet which were noticed during the beautiful photo presentation of his life.

We all observed a man that cared for his partner, 5 children and the family pets. I also saw a man with a love of motor bike riding or driving a tractor.His father spoke of Paul always finding peace on the property in Yea.

His father also spoke about the battle Paul had for many years being diagnosed with PTSD and thanked many that assisted Paul during his journey.

The funeral service finished with the sound of a single bagpipe player walking through the large guard of honour for Paul.

In memory of Pauls police life he received a commendation for the work he performed in relation to a high profile public incident where he looked after the grieving mother whose child had just been murdered. Paul was also the first on scene giving CPR to the Hastings Jeweller who was murdered during a daylight robbery. These events unfortunately took a toll on a man who had a big heart

To all my friends who I spoke to today at the service and all those that were unable to attend. Please look after yourself and each other.

Its times like these that really makes me even more passionate for the #fightingptsdvicpol campaign.

RIP Paul. Your legacy will continue with other members that have gone before you.
May you keep a look out for your family and friends from above.

A senior police officer who helped Rosie Batty through the aftermath of her son Luke’s murder has died, shocking friends and family.

Leading Senior Constable Paul Topham was a key part of a coronial inquest into the 11-year-old’s death and was praised for his efforts during the matter.

ROSIE BATTY STEPS DOWN FROM FOUNDATION

THE SHOCKING STATISTIC NO AUSTRALIAN SHOULD ACCEPT

“The Police Association is deeply saddened by the ­sudden, tragic loss of one of our members in recent days,” he said.

“We would like to express our deepest sympathies to the member’s family, friends and shattered colleagues, and remind them that we are here to support them in any we can.”

Ms Batty said she would ­remember Sen Constable Topham for helping her through some of her darkest days. “I can’t speak highly enough of what he did for me,” she said.

“He was someone I could turn to when I was scared or worried about something. He was there for me when some in the police force weren’t.”

Ms Batty said she had heard Sen Constable Topham had been struggling with mental health issues in recent times.

“I knew he was going through some tough times but I’m saddened to hear that he’s no longer with us,” Ms Batty said. “It’s an absolute tragedy.”

A Victoria Police spokeswoman confirmed an officer from the Southern Metro region had died and a report was being prepared for the coroner.

The death is not being treated as suspicious.

In his coronial findings, Judge Ian Gray praised Sen Constable Topham for his efforts during the investigation.

If you are experiencing personal problems call Lifeline on 13 11 14.

In memoriam: Senior Constable Paul Matthew Topham, Victoria Police #36971, Southern Metro region, died suddenly after many years of brave struggle with PTSD on the 1st January 2019. He was 37 years old.  He was a key part of the investigation and the subsequent coronial inquest into Rosie Batty’s 11-year-old son Luke’s death. Senior Constable Paul Topham arrested the killer in January 2013. Judge Ian Gray praised Sr Cst. Topham for his excellent efforts during the investigation.⠀ ⠀ Police Association Secretary Wayne Gatt said the well-respected officer would be sorely missed. “We would like to express our deepest sympathies to the member’s family, friends and shattered colleagues, and remind them that we are here to support them in any we can,” he said.⠀ ⠀ Senior Constable Paul Topham fought a heroic battle with operational stress injury (PTSD) in recent times.⠀ ⠀ He left behind his loving wife and five children. Our thoughts and prayers with his family.