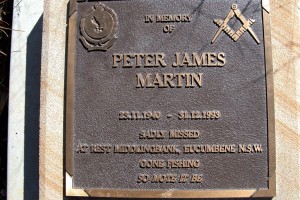 FROM TOWRANG, WE DROVE WEST TO ‘BIG HILL’ WHERE WE STOPPED AT A CHURCH AND TOOK A FEW GRAVE PHOTOS IN THE Cemetery BEFORE HEADING OVER TO TARALGA AND THEN BACK TO GOULBURN. 160K ROUND TRIP.

THIS PLAQUE HAS THE NSW POLICE CREST BADGE ON THE UPPER LEFT CORNER.

I DON’T KNOW THE STORY BEHIND IT AT THIS STAGE.

We were driving around aimlessly one day (090406) in the depth of Goulburns Patrol and we came upon this small Church at a place called ‘Big Hill’.

Nothing there except for this Church and a few headstones.

One of the headstones had the NSW Police Crest on it – together with another Crest – which is the Free Masons Crest.

Even though it is relatively a new grave – the fact that it has the NSW Police Crest was interesting.

I have no idea who he was, where he was Stationed etc or what the reference to Eucumbene is.

I assumed that he has a Head Stone at ‘Big Hill’ (Goulburn / Taralga) but is buried at Eucumbene.

But Peter James Martin was only 53 when he died and died on New Years Eve.

I did a “Google” search on him but didn’t find any information on him.

It also has the NSW Police crest and the symbol of the Free Masons.